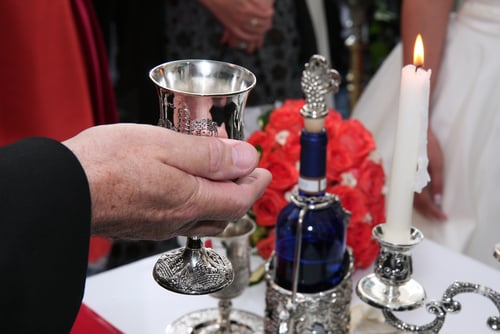 Rabbi holds kiddish cup with wine in front of a groom and bride.
December 23, 2014
Lauren Markoe

Rabbi holds kiddish cup with wine in front of a groom and bride.

(RNS) A broad coalition of American Jews last month formed the Jewish Religious Equality Coalition -- or J-REC -- to pressure Israel to diminish the role of Orthodox rabbis who control so much of Jewish life in Israel.

For these Jews, the Chief Rabbinate upholds a strict set of standards governing conversion, marriage and burial that many cannot hope to meet or do not want to embrace.

The goal is to "break the monopoly," said Sharon Weiss-Greenberg, executive director of the Jewish Orthodox Feminist Alliance and a member of J-REC. "We want to make sure that everyone in Israel has certain rights -- including marriage."

Within Israel, marriages between Jews must follow the rules of the Chief Rabbinate to be considered legal. Each year, thousands of Israeli Jews travel abroad to be married in a civil ceremony or Jewish one to sidestep the Chief Rabbinate's approval. Performed abroad, such marriages can then be recognized in Israel.

Weiss-Greenberg said J-REC will first address the marriage issue. Another concern of  J-REC is conversion. Israel's Chief Rabbinate does not recognize conversions not supervised by its office or by strict Orthodox guidelines.

The coalition, which includes members from Orthodox, Conservative and Reform Judaism -- the three major streams of American Judaism -- will explore "relations with like-minded Israeli groups," said Steven Bayme, national director of contemporary Jewish life at the American Jewish Committee, the advocacy group that formed the coalition.

"Our target would be to meet with leaders of both right and left-of-center parties," he said.

Why should Jews outside Israel care about the rules within Israel?

The American Jewish organizations that came together to create J-REC recognize the Jewish community as a global one with two centers: More than 80 percent of the world's 13 to 14 million Jews live in Israel or the U.S. While many Jews believe the Chief Rabbinate unfairly restricts Jewish choices in Israel, they also worry that the strict nature of the religious authority undermines the connection that American Jews feel toward Israel.

Orthodox Jews make up a small proportion of U.S. Jews -- 10 percent according to the Pew Research Center's 2013 survey, compared to 35 percent who identify with the Reform movement and 18 percent who consider themselves Conservative. Reform and Conservative Jews ordain women as rabbis and permit rabbis to perform same-sex marriages. And though most Israeli Jews are secular, the Orthodox religious establishment has long held sway over key events in Jewish Israelis' lives.