Traditionally, the 12th day of Christmas is marked by Eastern Orthodox, Catholics and some mainline Protestants as the day the three kings visited the baby Jesus. For Eastern Rite Christians, Epiphany (also called Theophany) emphasizes the revelation of Jesus as the son of God through his baptism and the beginning of his public ministry. Thousands of believers make pilgrimage on that day to the Jordan River where John baptized Jesus.

And that’s where the controversy begins.

While Israel has long claimed that Jesus was baptized on the Israeli side of the river, increasingly scholars are lining up to support archaeological research showing the baptism site is actually in Jordan. When Pope Francis visited the Holy Land last spring, he made a point of holding Mass at the Jordanian baptism site, lending additional credibility to the claim. 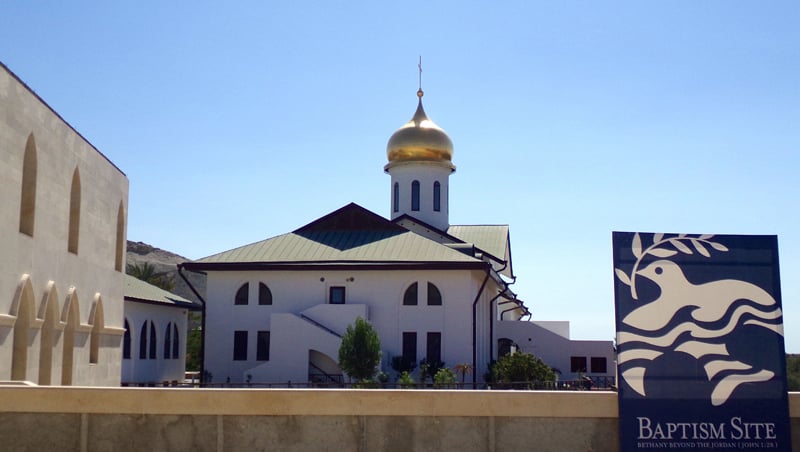 A dozen churches are being built near the site where believers claim Jesus was baptized, on land donated by the Jordanian government. Religion News Service photo by Dale Hanson Bourke

Called “Bethany beyond the Jordan” in the Bible, scholars point to both textual and archaeological evidence that the site is on the east bank of the river. For many Christians, the baptism site is the third holiest site of Christianity, joining Bethlehem, where Jesus was born, and the Church of the Holy Sepulchre in Jerusalem, where he is believed to be buried.

The baptism site itself combines a carefully controlled archaeological dig surrounded by the construction of a dozen new churches and guesthouses. Cleared of mines after the 1994 peace treaty with Israel, the area is carefully protected by the Jordanian government to preserve numerous archaeological treasures being unearthed daily.

One excavation revealed remnants of a third-century church with a cruciform baptismal structure where early pilgrims came to be baptized. Carved into the stone are thousands of small crosses, signs early Christians would leave after being baptized. Another dig has unearthed what is believed to be the cave where John the Baptist lived.

The Roman Catholic Church is now constructing a 32,000-square-foot church and center on the grounds to welcome throngs of tourists. Last year on Epiphany, thousands of pilgrims from dozens of countries gathered for Catholic, Orthodox and Anglican worship services at various churches in the area. This year, the Jordanian tourism board believes even more pilgrims will flock to the site, bolstered by the blessing of Pope Francis and the growing list of endorsements from the archbishop of Canterbury to American evangelical pastor Rick Warren, among others. 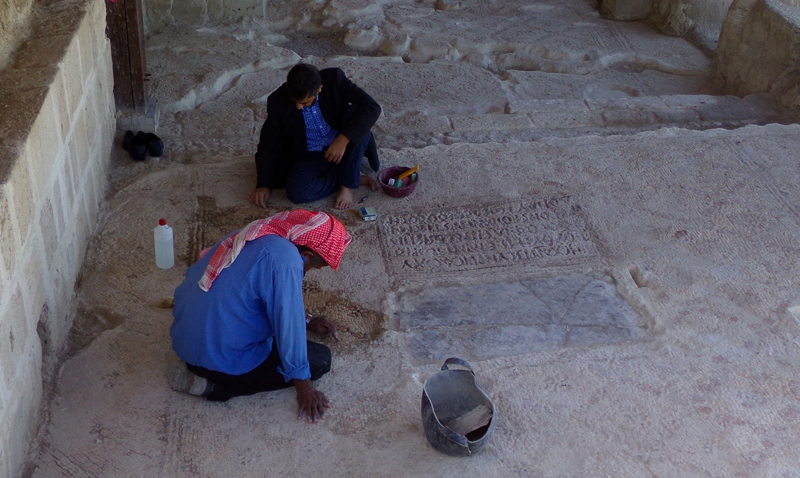 Jordan, a country that relies heavily on tourism, uses the slogan: “Jordan, the birthplace of Christianity,” hoping to draw more Christian visitors to the Muslim-majority country. In addition to the baptism site, biblical tours include Mount Nebo, Madaba, Petra, and other sites mentioned in the Bible.

On the Jordanian bank, visitors have a clear view of pilgrims being baptized on the Israeli site, just a few yards across the muddy river. Israeli and Jordanian soldiers stand guard on either side, while tourists sing hymns and step into the river.

The main Jordanian baptism site is a few yards down the river, where it widens and there is better access for those who want to be immersed in the waters. An ancient baptismal font has been restored for those who prefer sprinkled or poured baptisms.

Although Christians are a small minority in Jordan, they worship openly and many hold high positions in the government and business. Christian tourism is an increasingly important source of revenue to this country that is providing shelter to refugees from Syria, Iraq and other war-torn countries in the region.

(Dale Hanson Bourke is author of “The Skeptic’s Guide to the Israeli-Palestinian Conflict” and can be followed @DaleHBourke or at www.DaleHansonBourke.com.)

News
In Oregon, churches and anti-fascists unite to provide mutual aid to fire evacuees and others in need
Signs of the Times
Vatican causes chaos by invalidating baptism formula
News
Under tents and with folding chairs, Catholics resume First Communions and baptisms outdoors
General story
Trump was right. God can be hurt. But not by Biden election, say theologians
News
Vatican Museums used to be an overcrowded ‘hell,’ say tour guides. COVID-19 may change that.
© Copyright 2020, Religion News Service. All rights reserved. Use of and/or registration on any portion of this site constitutes acceptance of our User Agreement and Privacy Policy, Privacy Statement and Cookie Notice. The material on this site may not be reproduced, distributed, transmitted, cached or otherwise used, except with the prior written permission of Religion News Service.