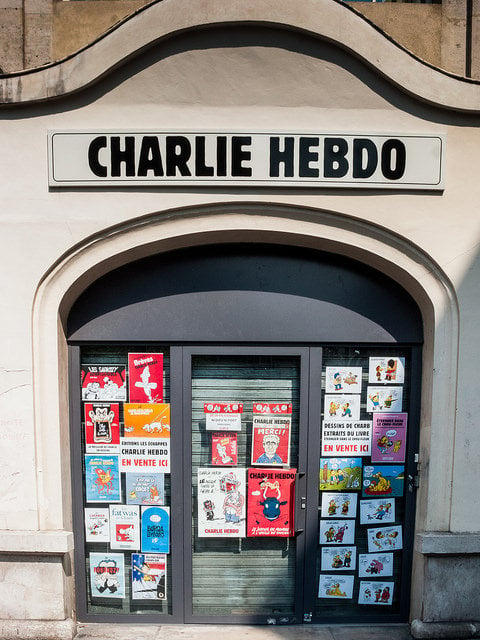 The hunt is now on for the assailants, two or three masked men who witnesses and police say opened fire with automatic weapons inside the office of French weekly Charlie Hebdo.

“People are exploiting this one way or another,” said Fateh Kimouche, 38, the founder of Al Kanz, a prominent French Muslim blog. “The terrorists didn’t distinguish what faith their victims were from. … I just found out that one of the cops killed, his name was Ahmed. Even Muslims aren’t safe.”

The three gunmen who attacked the magazine during an editorial meeting reportedly shouted “Allahu Akbar,” and described themselves as al-Qaida in Yemen. They killed prominent cartoonists, staff members and two police officers in what French officials described as a carefully planned and executed attack.

The French weekly has drawn the ire of Muslims before. Its offices were firebombed in 2011, after a spoof issue skewering Muhammad, the Muslim prophet. A year later, the magazine published crude caricatures of Muhammad, shown naked and in sexual poses. Most Muslims object to any depictions of the prophet, even if reverent.

Reaction — and condemnation — was swift.

Dalil Boubakeur, president of the French Council of the Muslim Faith, said in a statement that the strike was an “attack against democracy and freedom of the press.”

Boubakeur also warned against “throwing oil on the fire,” in an apparent reference to simmering anti-Muslim sentiment in France and across Europe.

Europe is no stranger to terrorist attacks. Bombings in Spain and Britain killed and injured hundreds of people a decade ago. Algerian Islamists also targeted France in the 1990s.

France has the largest Muslim community in the  Europe Union, an estimated 5 to 10 percent of a population of about 66 million people.

French Muslims say their community has been stigmatized for years. They point to the ban on Muslim full-face veils called the “burqa” and “niqab” passed in 2010 as just one more example of restrictions being imposed on their religion. Traffic and a beggar in the Paris metro.

Muslims complained about the tone of that debate, with politicians saying that such legislation was urgent to preserve national identity and national security.

“I believe that the attacks today will only grow the racism against Muslims,” said Abdallah Zekri, president of the National Observatory Against Islamophobia, in Paris. “I hear many politicians saying that this is an Islamist terrorist attack and not just a terrorist attack.”

Benoit Gomis, international security analyst and associate fellow at London-based Chatham House, a think tank, said France needs to take care in how it reacts to this attack.

“We should be careful with statements and shouldn’t stigmatize the Muslim community further,” he said. “This should be about the resilience of the French people in the face of such attacks and creating a more inclusive society because that is the best way of combating terrorism.”

Gomis said there was no indication that anti-Islam sentiment contributed to this attack or others by extremists.

On the Place de la Republique in Paris Wednesday night, people gathered to display their shock, anger, sadness and solidarity for those who lost their lives. People conceded that rising Islamophobia had created increased tensions.

“In general there is plenty of tension with religion in France, whether it is Islamophobia or anti-Semitism,” said Bernadette Hutson, 22, an account manager at Ogilvy Paris, an advertising agency. “When it comes to Islamophobia in Paris, it is a two-fold thing: It is an immigration issue and also the fact that people here have an idea that you don’t display your faith (openly), and they aren’t very forgiving (of that). This increases tensions even more.”