VATICAN CITY (RNS) While baptizing 33 babies in the Sistine Chapel on Sunday (Jan. 11), Pope urged mothers to breast-feed their infants if they were hungry.

“Mothers, give your children milk — even now,” Francis said. “If they cry because they are hungry, breast-feed them, don’t worry.”

The pope departed from his prepared text, which included the phrase “give them milk,” and inserted the Italian term “allattateli,” which means “breast-feed them.” 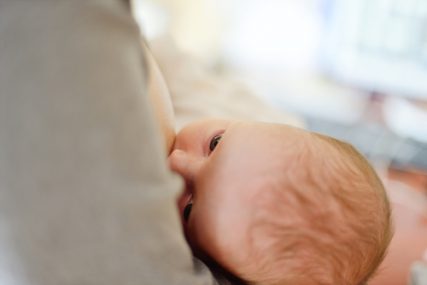 A mother and baby breast-feeding.

The celebration took place to mark the day Jesus was baptized by John the Baptist in the waters of the Jordan River.

Francis also asked the parents gathered to remember the poor mothers around the world.

“Let us thank the Lord for the gift of milk, and we pray for those mothers — there are so many, unfortunately — who are not able to give their children food to eat,” he said.

It’s not the first time that the pope has spoken out in favor of breast-feeding. In 2013 Italian media published details of an exchange between the pope and a young mother in which he encouraged her to feed her crying baby.

The Sistine Chapel is where popes are elected in secret conclaves; its spectacular 16th-century frescoes by Michelangelo and other Renaissance masters attract around 6 million tourists a year.

The chapel was closed to the public for the baptisms, the sacrament through which infants or others are initiated into the Christian faith through a ritual in which the convert is blessed with water.