WASHINGTON (RNS) The Supreme Court on Monday (Jan. 12) considered a tiny church’s curbside sign in a case that could raise the bar on government regulation of speech, and make it easier for houses of worship to advertise their services.

Pastor Clyde Reed of Good News Community Church, center, his wife Ann, and Kevin Theriot, of the Alliance Defending Freedom, back left, on the steps of the Supreme Court after their case had been argued to the Supreme Court justices. Religion News Service photo by Lauren Markoe

The Alliance Defending Freedom, the advocacy group that represents Pastor Clyde Reed and his Good News Community Church, bills the case, Reed v. Town of Gilbert, as a religious rights case. But their attorney mostly argued it on free speech grounds.

“The town code discriminates on its face by treating certain signs differently based solely on what they said,” attorney David A. Cortman told the justices. “The treatment we’re seeking is merely equal treatment under the First Amendment.”

The town of Gilbert, Ariz., outside Phoenix, allows political signs to be much larger and permits them to stay up much longer, Cortman said.

Chief Justice John Roberts noted that Cortman’s case did not rely on the religious nature of the plaintiff.

“Your argument does not turn on the fact that it’s a church’s sign, does it?” asked Roberts. “Your argument would be the same if this is a temporary sign about where the soccer game was going to be?”

With about 30 congregants, Good News Community Church has no permanent home. Members planted so-called temporary directional signs — the kind intended to guide drivers to a concert or school picnic — to help people find the location where it would offer services.

The congregation brought suit against the town seven years ago after receiving multiple citations for failing to take its signs down within an hour, as town rules require. But the church noted that the same rules didn’t apply to political signs, or homebuilders who erected signs to entice people to look at their new houses.

“This is a speech case, not a religious rights case,” said Ira Lupu, a law professor emeritus at George Washington University, who has followed the case. “The issues would be the same if the plaintiff were the operator of a weekly meeting by a secular nonprofit group to discuss books or social problems.”

Gilbert officials have repeatedly prevailed in the lower courts by invoking their rights to regulate so-called temporary directional signage. Towns and cities enforce such regulations all over the country — restricting how big these signs can be, where they can be placed, and when they must be uprooted. 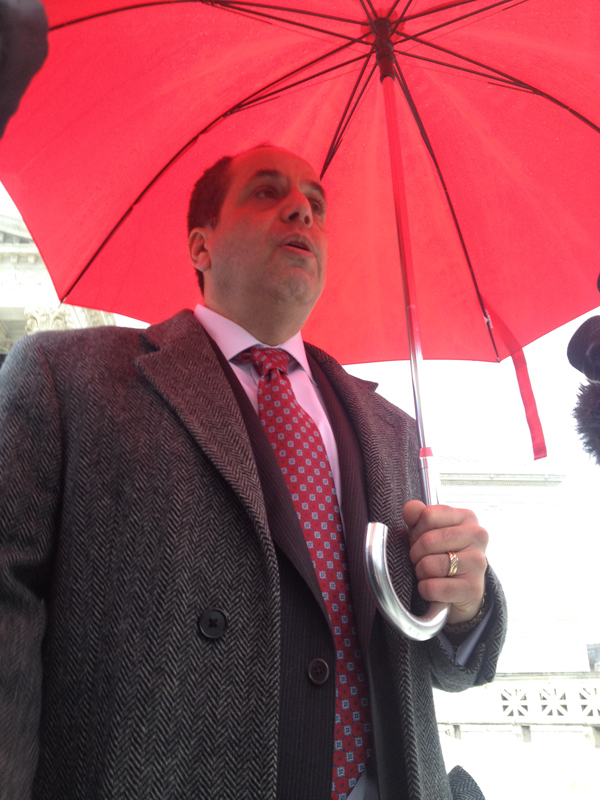 Philip W. Slavin, who argued before the U.S. Supreme Court on behalf of the town of Gilbert, Ariz., in Reed v. Gilbert on Monday (January 12, 2015). Religion News Service photo by Lauren Markoe

Philip W. Savrin, who argued Monday for the town, said municipalities have a right to control litter and clutter on their roadsides, and said the rules on temporary directional signs apply equally to church events, barbecues and soccer games.

“It is not something that is based on either the message that is being conveyed or the viewpoint,” he said after the justices heard the case. “It has to do with the function of the sign, which is to guide travelers on their route to their destination.”

But several justices had a hard time with that argument, questioning whether a church’s temporary sign was just about direction, or could relay messages that might put it into a different category: a sign expressing an ideology or belief, for example, that would receive more favorable treatment under municipal sign laws.

Justice Samuel Alito drew laughter from the courtroom when he suggested that Gilbert’s sign ordinances created artificial categories, in which a directional sign could only be about direction, or arrows pointing the way.

“So they could put up a quote-unquote ideological sign that says, ‘Come to our service on Sunday morning,’ but no arrow, and then they put up another sign that says, ‘this is the arrow?'” Alito asked of Savrin.

If the sign gives directions, Savrin responded, then it has to follow the rules on directional signs. “The sign could say, your honor, where it is taking place, but if it is intending to guide travelers to that location, then it would need to comply with — with the provisions.”

After the arguments, Reed, 82, spoke on the steps of the Supreme Court in a heavy rain, saying that he never imagined that his little church would wage a seven-year legal battle that would wind up at the highest court in the land.

“Our town treats church signs differently than other types of signs,” Reed said. “Our signs inviting people to church are very important, yet are considered second-class speech.”

The justices are expected to issue their decision next spring.