(RNS) In a scene in the movie “Selma,” the Rev. Martin Luther King Jr. sits in a jail cell wondering where the civil rights movement is headed. His cellmate, the Rev. Ralph Abernathy Sr., responds with a lesson from the Gospel of Matthew about the futility of worrying. 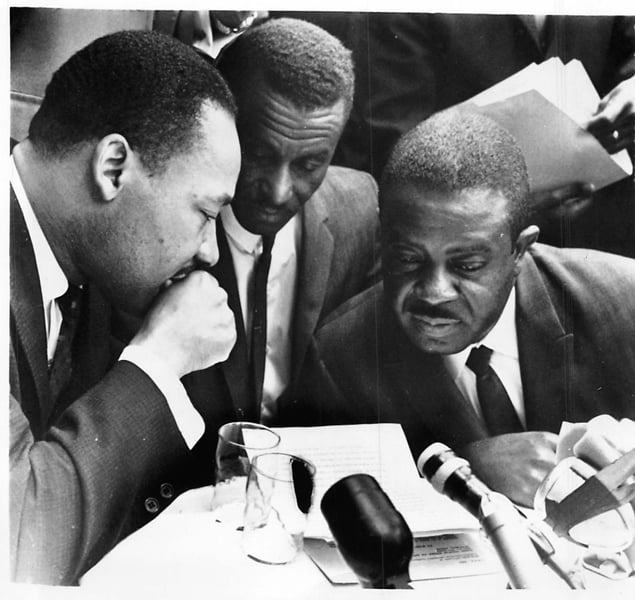 (May 10, 1963) The “Big Three” of the civil rights movement — left to right, the Rev. Martin Luther King Jr., the Rev. Fred Shuttlesworth and the Rev. Ralph Abernathy — put their heads together just before releasing a statement that accord had been reached on their grievances. Religion News Service file photo

In real life, the two men — family and colleagues say — were inseparable. One man is honored with a national holiday that will be celebrated Monday (Jan. 19) while the other is frequently overlooked, even as he continued King’s plans for decades after King’s 1968 assassination.

“Ralph is the best friend that I have in the world,” King said of Abernathy when his colleague introduced him for what would be his last sermon, in Memphis, Tenn.

But Abernathy, who died in 1990 at age 64, was harshly criticized for writing in his autobiography, “And the Walls Came Tumbling Down,” about King’s marital infidelity. Abernathy’s family members believe that criticism contributed to efforts to “erase” him from the annals of civil rights history. His widow and his namesake son say the new movie does not fully depict the close partnership he had with King.

“It has some positive aspects,” said Juanita Abernathy, who married her husband in 1952. “But the portrayal of my husband, no, it is not correct and that is one of the tragedies of ‘Selma.’”

Asked for a comment about the family’s reaction, director Ava DuVernay said Abernathy’s widow was “nothing but complimentary” at a screening she attended, and her son requested that his daughter get a role as an extra. His request was granted.

King and Abernathy were so close that they dined together with their spouses and children, who called each of the men “Uncle.”

“Martin didn’t do anything that Ralph David Abernathy didn’t do except he took a bullet,” Juanita Abernathy recalled in an interview. “Martin never made a decision that Ralph Abernathy was not a part of. And it trickled down from the two of them to everybody else.”

She said historic photos prove her point: Many show the two men together at significant moments, marching arm in arm or meeting with other figures of the 1960s, including Malcolm X.

“They only met once and my husband was standing right there,” said Juanita Abernathy, who lives in Atlanta. “They shook hands across him — Martin and Malcolm.” 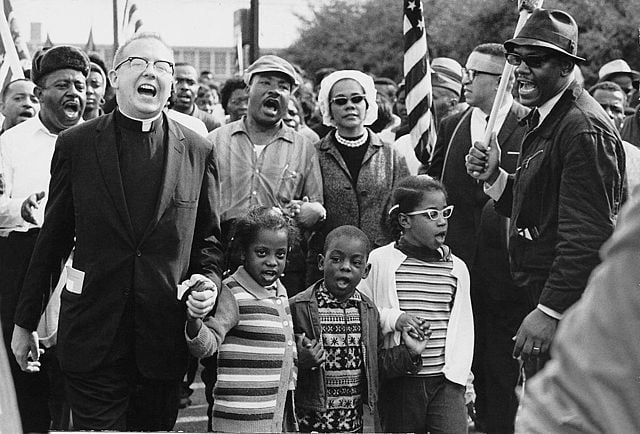 Ralph Abernathy grew up in Linden, Ala., and served in the segregated Army in World War II before starting his life as a pastor in his home state. He was the leader of First Baptist Church of Montgomery and a member of the local NAACP chapter. When Rosa Parks was arrested for refusing to yield her seat on the bus to a white man, he got the call from the chapter president and suggested involving a new local pastor, King, in the steps that led to their joint work on the Montgomery bus boycott in the 1950s.

Later, both men were co-founders of the Atlanta-based Southern Christian Leadership Conference, a civil rights organization that Abernathy led after King’s death.

Abernathy was one of the last people to speak with King. In a 1986 interview in the Syracuse Herald-American, he recalled that King stepped onto their motel balcony in Memphis while Abernathy went to put on some Aramis cologne. Then a shot was fired. “I had lost my best friend,” he said. “The Aramis saved my life.” 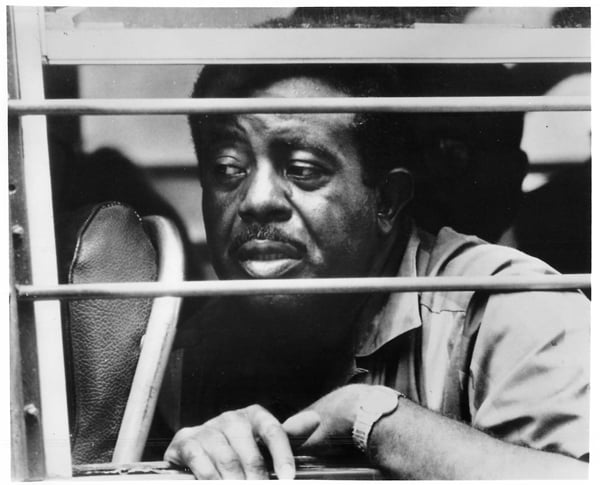 (1968) The Rev. Ralph Abernathy peers through the barred window of a bus taking him to jail in Washington, D.C. The head of the Southern Christian Leadership Conference, with some 300 others, was arrested for attempting to demonstrate on the Capitol grounds. Religion News Service file photo

After the assassination, Abernathy marched in Washington to fulfill King’s plans for the Poor People’s Campaign and later worked to get black politicians elected. Controversially, he endorsed Republican Ronald Reagan, who later signed the law marking the King national holiday.

“Ralph Abernathy kept on moving and working to change the course of history in the United States of America for African-Americans and minorities,” his widow said, “and he didn’t stop until he died.”

Abernathy’s son, the Rev. Ralph David Abernathy III, has spearheaded an initiative to get his father’s Atlanta church, West Hunter Street Baptist, to receive a National Park Service designation. Freedom Summer training sessions and other voter education projects were held at the church.

“West Hunter Street Baptist Church stands as a testimony to social activism, civic engagement and the important role African-American churches have played in the American civil rights movement,” said Brent Leggs, a senior field officer with the National Trust for Historic Preservation. “By preserving this landmark, we honor the remarkable life once lived of Ralph David Abernathy Sr., an iconic freedom leader in American history, and the countless and nameless heroes of the movement.”

Those who worked with Abernathy said his association with King was closer than most people realize. “They used to call them the civil rights twins — he and Dr. King,” recalled Terrie Randolph, who was Abernathy’s secretary when he became president of SCLC after King’s death. “You wouldn’t see one without the other and for any — not only major but minor — decision they consulted with each other.”

The younger Abernathy compared his “Uncle Martin” and his father to the biblical description of Jesus’ sending out the disciples “two by two.”

“You give Ed McMahon to Johnny Carson. You can even give Bobby Kennedy to John,” he said. “Black men came together that were not brothers, but were brothers in spirit.”