I was on a walk this afternoon and got into a rhythm that reminded me of a song, and started humming, keeping time with my left foot, then my right:

As I went down in the river to pray
Studying about that good ol' way
And who shall wear the starry crown?
Good Lord show me the way! 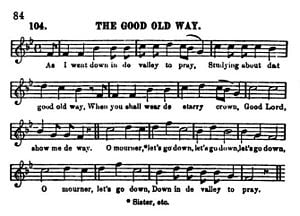 Not much is known about the song's origins. I had always assumed it was an old spiritual, and it might be, but Wikipedia is a little less assured. It first showed up in 1867 as "The Good Old Way," and some of the lyrics were different--was it "down to the river" or "down in the river?"--but the main idea was there. You go to the river, the place of endless energy and strength, to pray together, to receive grace.

The song stuck in my head after a friend sent me a link to yet another blog post by yet another pastor enjoining women to be modest. At first, the blog's title was "The Problem with Christian Cleavage," which some objected to, and was changed to "The Importance of Dressing Modest." Horrible Oscar Wilde ripoff aside, this saddens me to no end. Dressing modestly may be a worthwhile topic of conversation with a friend or relative, but as the subject of a blog, it's silly. So many people have gotten used to preaching via blog post that we forget that the Holy Spirit rarely convicts us online. In the meantime, my heart breaks for the women who will read this post and assume, because of their chest size or wardrobe choices, they are not welcome at the river.

There are some people who would say only certain types of people are allowed at the river. Up until not so long ago, white and black people in this country were told to go to different rivers, and sometimes they still do. Men get more of the river than women, and rich people drive themselves while poor people walk miles in bare feet to get the river's grace. Women who cover up and dress modestly are allowed to the front of the river, while those who come in yoga pants or cleavage-baring tops; those women have to wait for what's leftover. They will only ever achieve a fraction of holiness, according to some.

But the river, which is the Holy Spirit, whose law sets us free from sin and death, bids us all welcome. And for women who are weary of being told how to be, how to dress--for women who are told their bodies are a source of shame--well, I want to invite you down to the river. I want to be your sister.

I'm at home now, back from the walk, but the song still plays in my head. O sisters let's go down; down in the river to pray. Maybe it is in the river, soaked in the presence of God, that we will finally understand who we are.