NEWPORT, Wash. (RNS) At a conference for Western Buddhist teachers some years ago, the Venerable Thubten Chodron and other monastics complained to the Dalai Lama about the difficulties they faced: lack of finances, education, a place to live.

At one point the leader of Tibetan Buddhism began to weep. Finally he told the teachers: “Don’t rely on us to do things for you; go out and do things to help yourself. If you run into problems come and tell me.”

Those words changed the course of Chodron’s life.

The notion of starting a Tibetan Buddhist monastic community in the West was already in the back of her mind. All she needed was permission.

Chodron’s quest took her from Seattle to Missouri to Idaho, and ultimately to 240 acres of forested land just outside Newport, Wash., a quiet town of just 2,100 people.

Here, she formed Sravasti Abbey, one of the only U.S. monasteries where women — and soon men — can devote themselves to Tibetan Buddhism and become fully ordained. Since its founding in 2003, the abbey has served as a training ground for 10 ordained women (known as bhikshunis) and a community for hundreds of visiting lay monastics and practitioners.

Chodron said she was inspired to start the monastery because in the Tibetan tradition, there wasn’t a place for monastics in the West to prepare for and receive proper monastic training. “There are dharma centers,” she said, “but they are designed for lay practitioners, even though some monastics may live there.”

In other words, for Buddhism to flourish in the West, there needed to be a stable sangha, or community of monks and nuns.

Chodron and the Dalai Lama named the abbey “Sravasti” after a place in India where the Buddha would go on retreats.

Historically, full ordination has not been available to women in the Tibetan tradition. 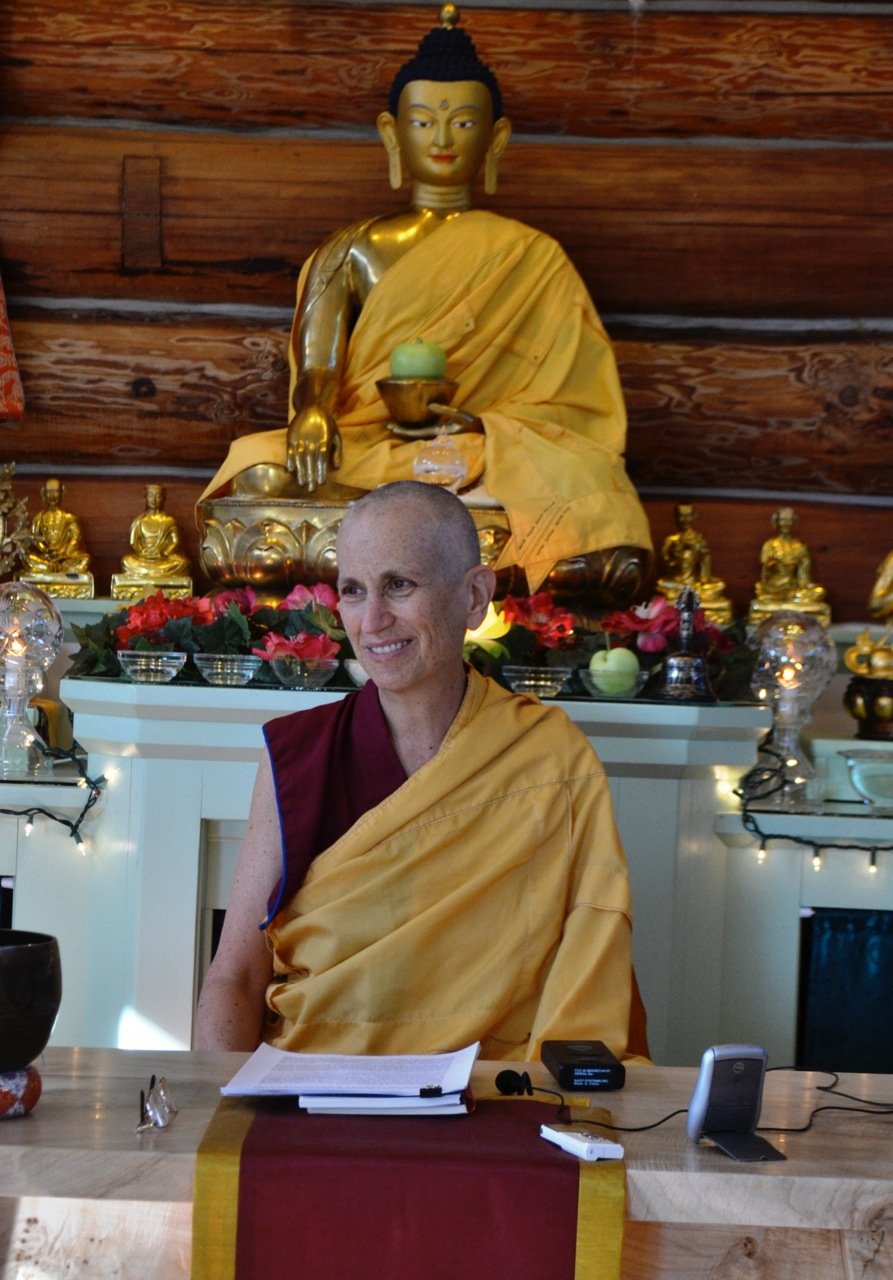 The Venerable Thubten Chodron’s quest took her from Seattle to Missouri to Idaho, and ultimately to 240 acres of forested land just outside Newport, Wash., a quiet town of just 2,100 people. Photo courtesy of Sravasti Abbey

A quorum of senior monastics is required to confer full ordination, said Sallie King, professor of philosophy and religion at James Madison University. Because Buddhism is still relatively new in the West, women wanting full ordination must receive the blessing of monastics from one of the faith’s other traditions or lineages.

“The Dalai Lama has been personally sympathetic, but formal support of female full ordination does not exist,” King said.

Sravasti Abbey is hoping to change that and aspires to offer full ordination for men in addition to women.

Located about 40 miles outside of Spokane, Wash., the abbey rests in lush meadows above rural farmland. The monastics here begin their days with meditation, break away to lead programs or tend to the property and return together for dharma discussions.

Most of the nuns are from the U.S. and converted to Buddhism as adults.

Venerable Thubten Chonyi is one such nun. She has been a student of Chodron’s for nearly 20 years and received her ordination in 2013.

“I feel a very strong responsibility for establishing something that will be here, hopefully, for hundreds of years after us,” she said. “We’re creating a space for the people behind us.”

Born Cherry Green, Chodron was raised a secular Jew and became a Buddhist nun 37 years ago after earning an undergraduate degree at UCLA and working for a while as a public schoolteacher in Los Angeles.

She attended a meditation course in 1975 and later traveled to the Kopan Monastery in Nepal to continue her studies. She never looked back. She was ordained in Taiwan in 1986.

A petite woman with maroon robes, a shaved head and a quiet voice, she soft-pedals the role she’s had in establishing the lineage and keeps words to a minimum.

Being a raging feminist doesn’t work in the Tibetan community, she said. Being respectful and confident does.

Her students say she is forging a way forward for women.

“She does it as gently as possible and skillfully as possible, yet still gets its done,” said Tracy Morgan, one of Chodron’s students.

Before launching the monastery, Chodron made a name for herself by writing books. She has authored 10 and edited another 10.

She is the only female monastic to pen a book with the Dalai Lama — “Buddhism: One Teacher, Many Traditions” (Wisdom Publications, 2014) — and is admired for writing texts about practical ways people can apply the Buddha’s teachings to their daily lives.

Her teaching style is similar. 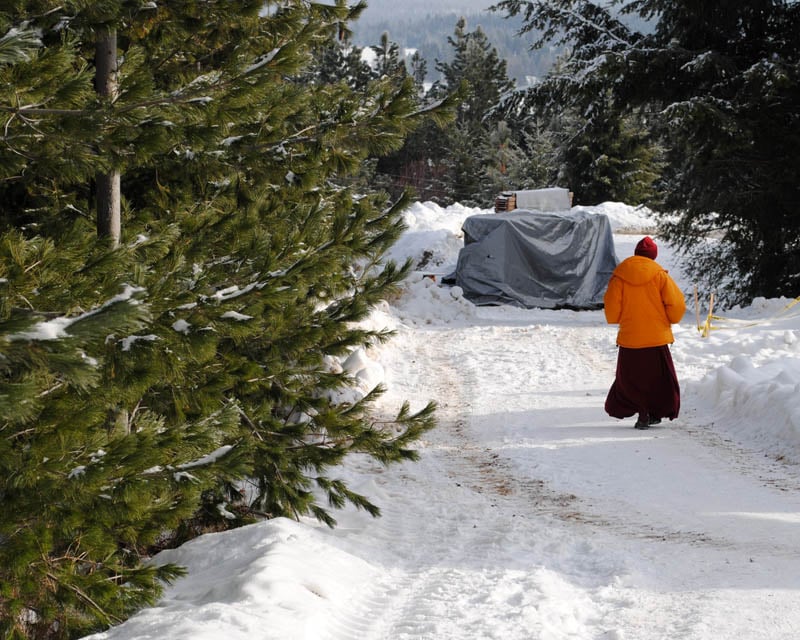 A nun from Sravasti Abbey walks on the property after a 2013 ordination ceremony. Photo by Tracy Simmons

“She cuts right to the chase and is not afraid to call people out where they’re stuck and call on them to do better,” said Jim Dawson, one of her students.

At 64, Chodron would like to train more monastics at the abbey, continue writing books — including another with the Dalai Lama — and keep spreading the dharma, or Buddhist teachings and values.

But the abbey may be her most lasting legacy.

Wilson, the Canadian professor, said the monastery could have a huge impact, not only on the regional community but globally, because people coming for monastic training can learn an Americanized form of Tibetan Buddhism that they can take back to their own countries.

The Dalai Lama has yet to visit the monastery, though he did offer an endorsement prominently displayed on the abbey’s website: “I am glad to know that the community seeks to provide both monks and nuns with not only equal opportunity, but also equal responsibility to study, practice and teach the Dharma.”

In 2013, during a visit to Australia, he even suggested that the next Dalai Lama could very well be a woman.

For Chodron, it is a sweet thought and an affirmation of a vision cast long ago.