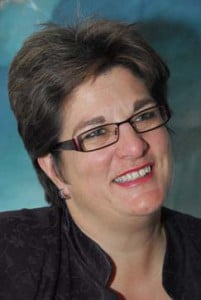 Jayne Ozanne , member of the Church of England’s Archbishops’ Council from 1999-2004. Photo courtesy of Accepting Evangelicals

CANTERBURY, England (RNS) One of the Church of England’s leading evangelical campaigners announced Tuesday (Feb. 3) that she is a lesbian and said she decided to be open after trying various ministries to cast out her sexual orientation.

“God is a God of surprises,” said Jayne Ozanne, 46, as she took up her new job as director of Accepting Evangelicals, a network of Christians who believe the time has come to move toward the acceptance of loving same-sex partnerships and a positive Christian ethic for gay, lesbian, bisexual and transsexual people.

In an interview with “Christian Today,” she said: “We can never be sure of what the future may bring but what I do know is that He will always look to transform our darkest hours into something beautiful.”

Ozanne said that during her years on the Archbishops’ Council (1999-2004) — one of the highest posts in this country’s established church — she prayed for grace to be celibate and subjected herself to a form of conversion therapy where clergy tried to cast out a sexual orientation they deemed demonic.

“It was like trying to cast myself out of myself,” she said.

The experiences left her feeling there was something wrong with her.

Although now single, she enjoyed a five-year relationship with an unnamed woman.

“I believe that was God-given in so many ways,” she said. “It is the evangelical church more than any other that needs to hear and embrace each other.”