MUNDELEIN, Ill. (RNS) Charged by Cardinal Francis George with the vague task of “jump-starting evangelism” in Chicago’s archdiocese nearly a decade ago, the Rev. Robert Barron accepted the mantle with gusto and in the process became one of the country’s best-known priests. 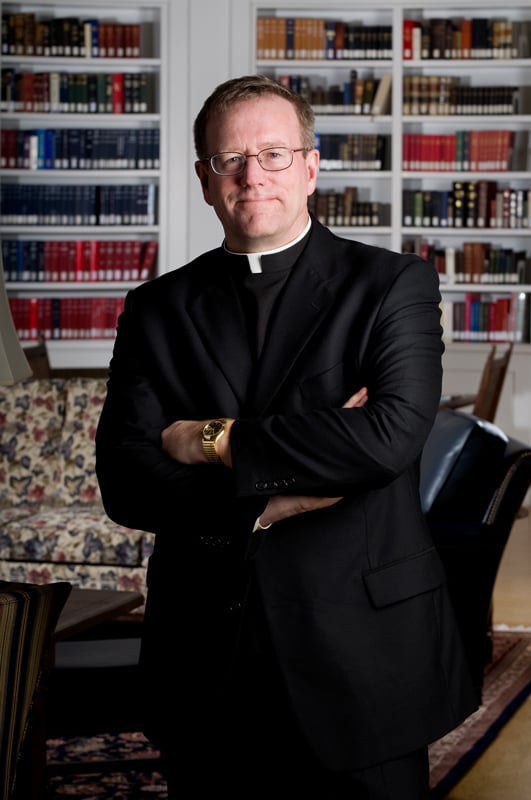 The Rev. Robert Barron’s Word on Fire ministry plans to complete the first six episodes of a follow-up series to his acclaimed 2011 documentary “Catholicism,” which aired on 250 PBS stations nationwide. Photo courtesy of Word on Fire Catholic Ministries

This year, his Word on Fire ministry plans to complete the first six episodes of a follow-up series to his acclaimed 2011 documentary “Catholicism,” which aired on 250 PBS stations nationwide.

He has also posted 416 cultural commentaries on YouTube, and this past fall he surpassed 10 million online viewers. The seven- to 13-minute clips range in subject from disquisitions on original sin and hell to commentaries on the Stephen Hawking biopic “The Theory of Everything” and Martin Scorsese’s “The Departed.”

And in September, Barron, 55, will be the opening speaker at the World Meeting of Families, a Philadelphia mega-event that will culminate with Pope Francis celebrating Mass to conclude his first U.S. visit.

For Catholics tired of the highly politicized public image of their faith, Barron provides easily digestible, no-nonsense eloquence. Skirting hot-button issues such as gay marriage, women’s ordination, the sexual abuse scandal and abortion, he takes a broad view of the church as many Catholics experience it and still toes a traditional line.

The church, he said in an interview, “is extreme in its demands. At the same time, it’s extreme in its mercy. We shouldn’t dial down the expectations. Love has to dominate every aspect of your life.”

Beauty — be it of artwork, literature, music, architecture or ideas — dominates Barron’s. His mandate, he said, is to preach “the good, the true and the beautiful,” and he believes that if people first encounter what’s beautiful in the church, they will later discover what’s good and true.

Barron likens discovering Catholicism to a kid discovering baseball, finding himself inside a big league ballpark, seeing the lights, hearing the crowds, smelling the grass, and as a result, wanting to learn the game.

Later, that kid may come to understand the church equivalents of the infield fly rule — or the finer points, some of which are most controversial. But Barron prefers to dwell on the big picture.

His documentaries, now a staple of parishes and Catholic schools around the country, feature lavish displays of classical art. Part travelogue, part art history lesson, the Catholicism series features the engaging, bespectacled, slightly rumpled Barron as professor and tour guide, leading his viewers on a trek from continent to continent, through holy sites and ancient ruins, pointing to maps, art, music, literature to drive home his story of Christianity’s growth and development.

In an upcoming series, “Catholicism: The Pivotal Players,” Barron tells the stories of key figures in church history, including Michelangelo, St. Francis of Assisi and St. Catherine of Siena.

Barron’s weekly schedule includes a short YouTube video in which he stands in front of an office bookcase, commenting on everything from Cicero to Bill Maher, bringing a church perspective to culture and laying out how the world intersects with the faith.

YouTube, he said, “attracts people who would never come near a church.” For that reason, “it’s an important evangelical tool.”

Though early meetings took place at a local Panera Bread shop, Word on Fire now numbers eight full-time staffers who work in a Skokie office tower, where they produce a lineup of study guides, parish resources and seasonal meditations via email blast.

Barron receives a priest’s salary from the Archdiocese of Chicago, as well as a modest stipend from the Word on Fire ministry, a nonprofit organization governed by a board of directors, said the Rev. Steven Grunow, the group’s CEO and executive producer.

The ministry was underwritten in its early days by a large donation. Today its $1 million annual budget is made up by revenue from sales of DVD and study programs. Documentaries such as the one in production now rely on fundraising drives.

Fluent in five languages, classically educated in the U.S. and abroad, and author of numerous books, Barron provides a classical antidote to the “too smart to be religious” mindset amplified by Richard Dawkins and Stephen Hawking in recent years.

It wasn’t always so. Baseball was Barron’s passion growing up, first in Detroit and then in suburban Chicago, and he played through high school.

As a high school student at Fenwick High School in Oak Park, he came across Thomas Aquinas’ “Summa Theologica,” a medieval compendium of theology that is considered a landmark achievement of Catholic thought.

“I felt as though something just broke in my life,” he said. “It was an experience of an invasion of the reality of God.”

In 2012, Barron was named rector of Chicago’s St. Mary of the Lake/Mundelein Seminary, where he has been a member of the faculty since 1992.

“He is a person of deep spiritual intensity who has accepted his public mission as evangelizer with great humility,” Grunow said. “If you asked him why he does this, he’d probably say because the church asked him to do it.”

On weekends, Barron likes to golf and watch sports on TV. He works out daily to rock ‘n’ roll, plays the guitar and adores Bob Dylan. Barron’s own drawing of his idol hangs alongside his academic credentials and photos of old rectors, students and saints in his office at Mundelein, about 40 miles north of Chicago.

If all of life is grist for the media evangelist, he sustains his spiritual side with traditional Catholic disciplines: celebrating Mass daily, reciting the five-times-daily liturgy of the hours and praying the rosary.

Diocesan priests with media ministries aren’t unheard of. New York’s Archbishop Fulton Sheen may be the most famous, with his enormously successful radio and television programs. The Rev. Andrew Greeley, also from Chicago, was a prolific novelist who wrote with the approval of his bishops. Archbishop Blase Cupich, who replaced the ailing Cardinal George, “has been very receptive” to his work, said Barron.

Barron seems to have broad church support and few, if any, detractors. “He’s one of the few people I haven’t heard categorized” as left or right, said Mary Beth Yount, director of content and programming for the World Meeting of Families event in Philadelphia.

New York’s Cardinal Timothy Dolan is an admirer. Popular Jesuit author the Rev. James Martin called Barron “one of the rare scholars who can speak in a popular way to people.”

“He’s an excellent evangelizer,” Martin said. “I’m happy to call him a friend.”

On a recent day, after some brief writing and recording, Barron turned to seminary work — student progress reviews and money matters.

As rector of the strikingly beautiful 800-acre campus, he has worked to keep it an appealing place for those who will follow in his footsteps. The long-shuttered students’ chapel, for instance, has been restored to feature a series of stained-glass windows, which include modern saints such as American heiress Katharine Drexel and philosopher Edith Stein.

In a church of high standards and ready forgiveness, all Catholics can be saints, he believes.

(Mary Beth McCauley is a freelance writer based in Philadelphia.)

News
Study: Biden still leads among Latino Christian voters, but Trump’s support has grown
News
In Oregon, churches and anti-fascists unite to provide mutual aid to fire evacuees and others in need
Opinion
What good is faith when your fertility treatments aren’t working?
News
Who is Junipero Serra and why are California protesters toppling statues of this saint?
Catholicism
Amid pandemic, scores of US Catholic schools face closure
© Copyright 2020, Religion News Service. All rights reserved. Use of and/or registration on any portion of this site constitutes acceptance of our User Agreement and Privacy Policy, Privacy Statement and Cookie Notice. The material on this site may not be reproduced, distributed, transmitted, cached or otherwise used, except with the prior written permission of Religion News Service.