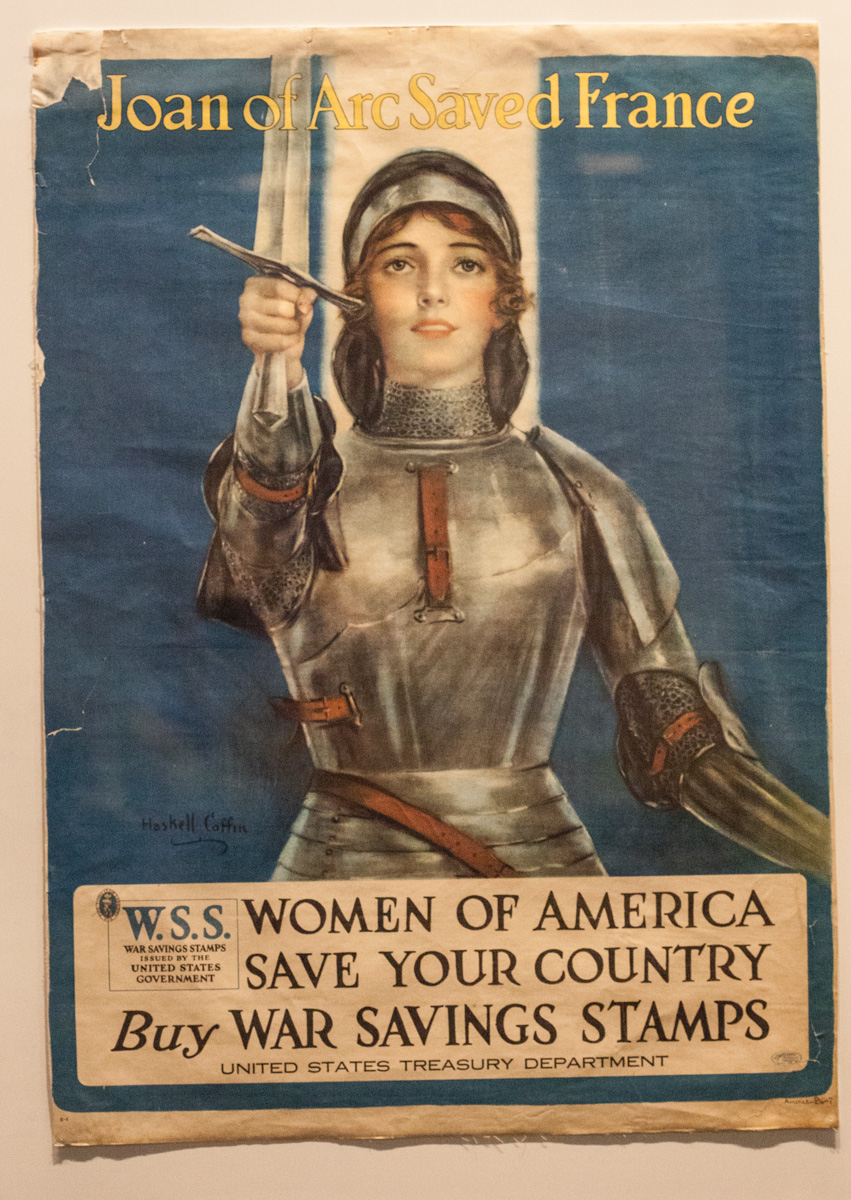 A poster featuring Joan of Arc on display at the National WWI Museum at Liberty Memorial in Kansas City, Mo., on May 2, 2014. The museum holds the most diverse collection of artifacts around the world. Religion News Service photo by Sally Morrow
February 24, 2015
Kimberly Winston

(RNS) "Martyr" is an old word getting new attention. Earlier this month, Pope Francis named Oscar Romero, a Catholic archbishop murdered in 1980, an official Catholic martyr, and the 50th anniversary of the Selma civil rights march reminds us of the martyrdom of the Rev. Martin Luther King Jr. and other activists.

Then there are the recent atrocities of the Islamic State group, also known as ISIS or ISIL, which last week (Feb. 15) released a video showing the beheading of 21 Coptic Christians. The Islamic State and many other groups, Islamic and otherwise, lionize their fallen fighters as "martyrs." This edition of The 'Splainer looks at the meaning of martyrdom and why one person's martyr can be another person's terrorist.

Q: What is a martyr, and how do you become one?

A: Traditionally, a martyr is someone who suffers death at the hands of others for his or her religious beliefs. The Roman Catholic Church calls it death due to "hatred of the faith." The word comes from the ancient Greek “martus” or “martys” and means “witness.” Typically, martyrs are revered by their co-religionists, held up as an ideal representative of the faith. But think hard before becoming a martyr: Martyrdom almost always means death. Then again, martyrs such as Joan of Arc are probably even better-known in death than they were in life.

Q: Do all religions have martyrs?

A stained-glass window of Oscar Romero, designed in 1999 by the Rev. Thomas Rosica and crafted by Joseph Aigner of Artistic Glass in Toronto. The window is part of the wall of saints and blesseds in the Chapel of the Newman Centre Catholic Mission at the University of Toronto. Photo courtesy of the Rev. Thomas Rosica

A: Pretty much, though they hold different statuses in various traditions. Some religions have official mechanisms for honoring martyrs. Catholicism has an entire “congregation,” or office, in the Vatican to identify martyrs and put some of them on a path to sainthood. Fun fact: An officially certified Catholic martyr, such as Romero, can bypass the first of two miracles required for sainthood.

Most Protestant denominations have no equivalent mechanism for recognizing martyrs, though they may honor the memory of those who died for their faith, such as Dietrich Bonhoeffer, a Lutheran pastor and Nazi resister. One exception is the Anglican and Episcopal tradition, whose martyrs include early Protestant reformers such as William Tyndale, as well as Jonathan Myrick Daniels, an American killed in the civil rights movement.

Mormons do not have a theology of martyrdom, yet their founder, Joseph Smith, is considered by many to have been a martyr for his murder at the hands of an angry mob in Carthage, Ill., in 1844. Evangelicals, too, have no official tradition of naming martyrs, but many evangelicals lift up Christians killed for their faith, including Cassie Bernall, the 17-year-old Columbine High School student shot and killed after telling one of the gunmen she believed in God, and missionary Jim Elliot, whose 1956 death in Ecuador was featured in the 2005 film "End of the Spear."

Q: OK, but those are all Christian martyrs. Do non-Christian faiths have martyrs, too?

A: Yes. Every Yom Kippur, Jews remember 10 rabbis killed by the Roman emperor Hadrian, and many call the Jews who fought to the death in the Warsaw ghetto martyrs. Some Buddhists consider monks who self-immolate to draw attention to a cause as martyrs, while Sikhs consider several of their founding gurus, or teachers, martyrs because they died defending their faith. Baha’is have martyrs, though to them the word has a different meaning -- to devote one’s life to the service of God rather than dying for one’s beliefs.

Then there’s Islam, where the idea of martyrdom can be a powerful motivator. In the Quran, those who die trying to fulfill a religious commandment are promised a direct trip to Paradise and a coterie of virgins. That may have prompted unknown numbers of young Muslims to seek jihad -- holy war -- on battlefields in Syria and Iraq as well as tall buildings in the U.S. and newspaper offices in Paris.

There are also completely secular martyrs -- Matthew Shepard, victim of a 1998 hate crime, has become a martyr to the LGBTQ community, as has Harvey Milk. Unarmed African-American men killed by police -- Staten Island's Eric Garner and Ferguson, Mo.'s Michael Brown, to name two recent cases -- have become symbols in their communities and beyond.

Q: Does the idea of martyrdom have a purpose beyond violence and death and suffering?

A: Yes. Carole Straw, a professor emeritus of history at Mount Holyoke College and an expert on martyrdom, says the persecution of martyrs and their subsequent veneration is an example of "community-building writ large." The death of a martyr strengthens the identity of his or her community and reinvigorates the cause he or she died for. At the same time, Straw warns, "We seem to be in a new era ... where martyrdom has become 'weaponized' as a strategy."