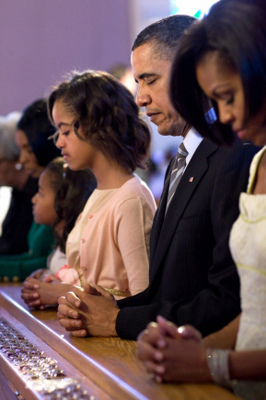 (RNS) President Obama and his family pray during Easter services at Allen Chapel AME Church in Washington on April 4, 2010. As many as four in 10 Americans cannot identify the president as a Christian. RNS file photo courtesy of Pete Souza/the White House

WASHINGTON (RNS) American presidents need wisdom, integrity, good judgment and humility. They should, if they are inclined, be free to draw strength from belief in and devotion to God. What’s more, Americans prefer their presidents to have religious faith.

Yet pundits, conservative religious elites and the public increasingly have hounded, judged and derided President Obama over his Christian bona fides, and the ways his private Christian faith finds expression in his public and political life.

Last week, former New York Mayor Rudy Giuliani trotted out the he’s-not-really-one-of-us dog-whistle that conservatives have employed against Obama for years. “I do not believe that the president loves America,” Giuliani said. Wisconsin Gov. Scott Walker, who was at the fundraiser where Giuliani blasted the president, declined to say whether Obama loves America and then, amazingly, punted on the question of whether Obama is a Christian.

Walker’s office later clarified, “Of course the governor thinks the president is a Christian.” But many of Walker’s fellow evangelicals are not so sure.

Prominent commentator Erick Erickson, now studying at Reformed Theological Seminary in Atlanta, took to Twitter to declare: “I don’t think Barack Obama is a Christian. He certainly is not one in any meaningful way.” That’s remarkable insight into the state of another man’s soul from a first-year seminarian.

More sensible conservatives settled on conceding that Obama is a “professed Christian,” a backhanded way of implying that there is a great difference between what the president professes and what he actually believes.

Evangelical blogger Justin Taylor explained in a recent commentary that “evangelicals would want to hear more from the professing Christian,” specifically what he or she believes about sin, atonement and the authority of Scripture.

There are arguments for and against our need to know what presidential aspirants believe about such things. Not so long ago, it was enough for most Americans that our culture’s vibrant religious traditions fostered personal morality, civic virtue, public-spiritedness and a commitment to the common good. We expected our presidents to adhere to some faith, but few were obsessed with parsing out his views on specific doctrines.

Conservative evangelicals may want to know more about the specific content of Obama’s beliefs, and if political parties want their nominating contests to include doctrinal debates or religious tests, that is their prerogative. But our national election every four years is for a chief executive of a secular state, and they should be careful what they wish for.

Imagine if a reporter asked the 2016 Republican nominee: “Do you believe God will condemn Muslims, Jews and other non-Christians to hell?” Most people likely do not want a president who believes that his or her religion alone is true and that Americans of all other faiths (and of no faith) deserve eternal torment for rejecting the gospel of Jesus Christ.

Evangelicals have very clear ideas about what it means to be a Christian, particularly a “born-again” conversion experience, belief in the Bible as the Word of God and a commitment to spreading the gospel to unbelievers. President George W. Bush’s religious experience and rhetoric reflected evangelical sensibilities in a way that Obama’s do not.

Boundary maintenance is very important to white evangelicals; they like to be clear about who is in and who is out. Given the rapid acceptance of homosexuality and same-sex marriage, even in some evangelical circles, leaders are especially preoccupied with their gatekeeping role.

The trouble with making presidents’ religiosity just another weapon in our ongoing ideological war is that we may have ruined religion for presidents themselves.

There is very little upside for presidents to be devoutly religious in office except to pander to certain constituencies. Presidents do not regularly attend religious services, and their religious expressions are often relentlessly scrutinized and condemned.

Even once-innocuous celebrations of faith have become fodder for vicious attacks. The National Prayer Breakfast now exists primarily to boost the careers of whatever speakers will insult and defy the president to his face. Given the reaction to Obama’s former pastor, the Rev. Jeremiah Wright, it is no wonder Obama has been reluctant to subject other clergy to media scrutiny for the most provocative statement they’ve ever made in a sermon.

If we are not careful, we will end up pushing presidents to the point that their faith becomes muted if not invisible in an office where they need guidance and inspiration, wherever it is to be found. It would be a shame that they should believe that in the White House, the benefits of religious devotion do not nearly offset the costs.

News
Charlie Kirk out at Liberty University’s Falkirk Center
Follow us on Facebook!
Submit your photos to RNS