Yet the fact that women in the Haredi sect are running at all is historic and radical for a community where politics — and decision-making — are traditionally left to the menfolk.

“Considering that these women are coming from a world where they have been prohibited from holding public office, the new Haredi feminist movement is radical and revolutionary,” said Elana Sztokman, an Israeli feminist. “It’s creating a buzz both within and outside the community.”

Recent polls show the new party probably won’t get enough votes in the March 17 election to win a seat in the Knesset, or parliament. But that’s not stopping the candidates from running on the ticket called Bezchutan: Haredi Women Making Change. They’re demanding that the government — and their own rabbis — provide Haredi women with the same rights and benefits as other Israeli women.

“In theory a Haredi woman votes according to what her husband tells her, which is based on what the rabbi tells him,” said Ruth Colian, 34, a Haredi new to politics who founded the party in January. “But we know that in the voting booth that decision is between the woman and God.” 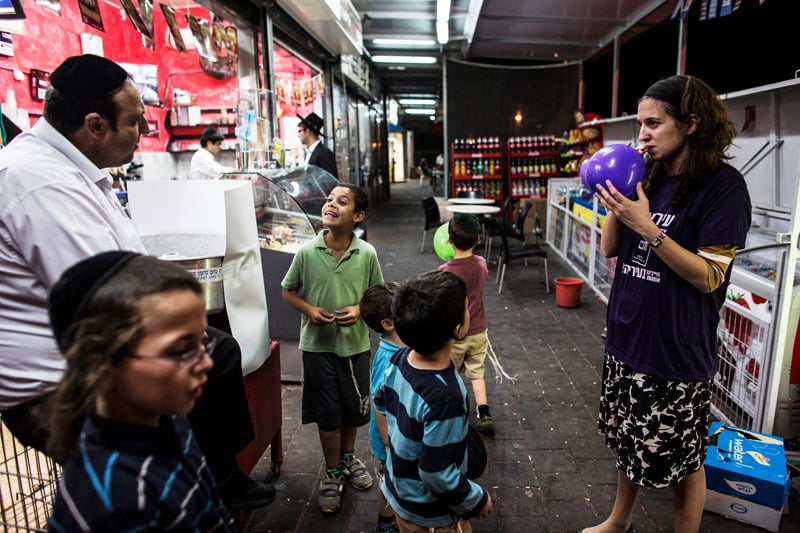 Michal Zernowitski, right, the head of Israel’s first-ever party comprised entirely of Haredi women, blows up a balloon as she campaigns for municipal elections in Elad, an ultra-Orthodox town near Tel Aviv on October 20, 2013. Photo courtesy of REUTERS/Nir Elias *Editors: This photo may only be republished with RNS-ORTHODOX-ISRAEL, originally transmitted on March 3, 2015.

The party’s supporters say it is a brave step forward in a society where rabbis prohibit their community members from owning a TV or surfing the Internet and where women — usually the breadwinners while their husbands focus on religious learning — are expected to keep a low public profile.

Colian said she founded the party “because there is no one in the Knesset representing us.”

Nearly 12 percent of Israelis are Haredi Jews, according to the government. Haredi political parties traditionally have been instrumental in shaping domestic policy, from social-welfare packages for the poor to military exemptions for yeshiva students.

Only one Haredi woman has served in the Knesset, as a member of the left-wing Meretz Party. In 2013 Racheli Ibenboim, a Haredi woman, said she withdrew her candidacy for the Jerusalem City Council after she and her family received threats from the community.

Colian, a married mother of four, acknowledged receiving threats. “People have threatened me, harassed me by phone,” she said. “They have called me a slut for daring to run for office.”

She would prefer to run on the ballot of an existing all-male Haredi party, but the parties refused. “They said women should remain inside, in the background,” she said.

Isaac Bezalel, spokesman for the Haredi Shas Party, said: “The Haredi public is not yet open to women serving in the Knesset. But we do have accomplished women on our women’s advisory committee.”

She also said twice as many Haredi women die from breast cancer than non-Haredi women, because many don’t go for screenings. “In Haredi society it is considered immodest to say the word ‘breast,'” she added.

Sztokman, who has been following the party on Facebook, said many Haredi Jews surf the Internet, despite rabbinical prohibitions.

“Social media has definitely given a power to this kind of political movement that didn’t exist before. You can be sure Bezchutan is the subject of conversation at countless Shabbat lunches, even if it’s in the kitchen among the women,” she said. “That in itself is a huge shift.”

Sztokman also noted that “its very existence has already started to have an influence. Haredi men have no choice but to acknowledge that things are changing around them.”

Chevy Fleischman Weiss, an American-Israeli campaign strategist not involved in Bezchutan’s campaign, said the candidates are trying to woo the most liberal women in Haredi society.

“In theory I believe these women’s goals are admirable. There is a need for a lot of the changes they are seeking,” said Weiss, who is Haredi. But instead of forming a political party, the candidates “should be finding ways to work with the rabbis and seek leadership positions within Haredi” to promote change.

Colian said the criticism and threats have hurt, but they made her stronger. “Thousands of women are praying for our success. I can’t let them down,” she said.