NEW YORK (RNS) Cardinal Timothy Dolan of New York said Islamic State militants terrorizing the Middle East are a distortion of “genuine” Islam much as the Irish Republican Army was a “perversion” of Catholicism. 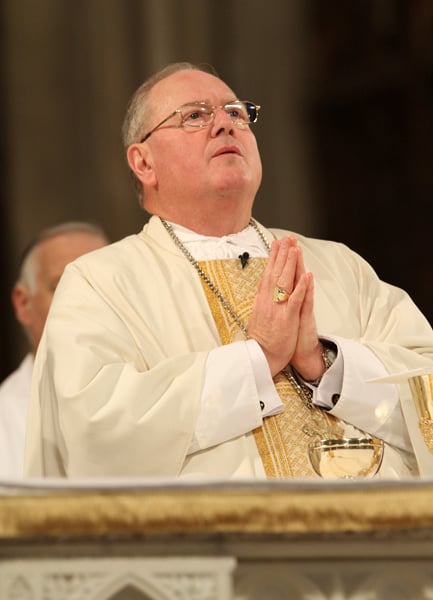 Cardinal Timothy M. Dolan of New York prays during a Mass at St. Patrick’s Cathedral in New York on May 2, 2013. RNS photo by Gregory A. Shemitz

Dolan’s comments to CNN on Tuesday (March 3) reflect similar statements about the Islamic State group from Pope Francis, but they also echo some of President Obama’s controversial remarks on Islam, Christianity and the history of violence carried out in the name of religion.

“The IRA claimed to be Catholic,” Dolan told CNN anchor Chris Cuomo. “They were baptized. They had a Catholic identity.” But, he continued, “what they were doing was a perversion of everything the church stood for.”

The spiritual leader of New York’s 2.8 million Catholics, Dolan said that likewise, the Islamic State extremists “do not represent genuine Islamic thought” but are “a particularly perverted form of Islam.”

“The analogy (to the IRA) is somewhat accurate,” said Dolan, an Irish-American who on March 17 will serve as grand marshal of the city’s St. Patrick’s Day parade.

“These are not pure, these are not real Muslims. Now what we need and what Pope Francis has led the world in saying, is we need the temperate, moderate, genuine forces of Islam to rise up and say this — they do not represent us. Now, that’s beginning to happen. God can bring good out of evil.”

Francis has frequently said the Islamic State does not represent genuine Islam and that “all religions have these little groups.” And he has pointed to instances when Catholics used religion to justify terrible violence.

But Obama sparked a fierce backlash at last month’s National Prayer Breakfast when he said ISIS does not represent genuine Islam. He also said Christians should not “get on our high horse and think this is unique to some other place,” because in the past believers also “committed terrible deeds in the name of Christ.”

Obama has also been criticized for not highlighting the fact that many Islamic State victims are targeted because they belong to the relatively small but ancient Christian communities in the Middle East.

Dolan showed no such hesitation this week, saying he believed the group was conducting a “systematic, well-choreographed, very well-focused attempt to eradicate the ancient Christian population in the Mideast.”

The IRA was a violent extremist group that existed in various forms throughout most of the 20th century, staging brutal terrorist bombings and attacks aimed at ending British sovereignty in largely Protestant Northern Ireland.

Some Catholic leaders strongly denounced the IRA and sought to downplay the religious aspects of the violence, but the IRA also found support among many clergy and the faithful.

The IRA largely ended its armed struggle after the April 1998 Good Friday Agreement, although some holdouts remain.