On Monday, Jonathan Merritt commented on recent letter from Southern Baptist Convention (SBC) past-presidents to President Obama. Tucked into the letter was their claim that the SBC is “America’s largest, and some say most multi-ethnic and multi-lingual, Protestant denomination in America.”  Merritt wisely paused and questioned this claim.

The Southern Baptist Convention is still overwhelmingly white, not just in among church attendees but also among the ranks of their leadership…I checked with the SBC’s LifeWay Research, and they told me they have no public data on Southern Baptist diversity. Furthermore, many other denominations don’t possess such data either, making a reliable comparison of this kind impossible.

Well, it’s difficult but not impossible. 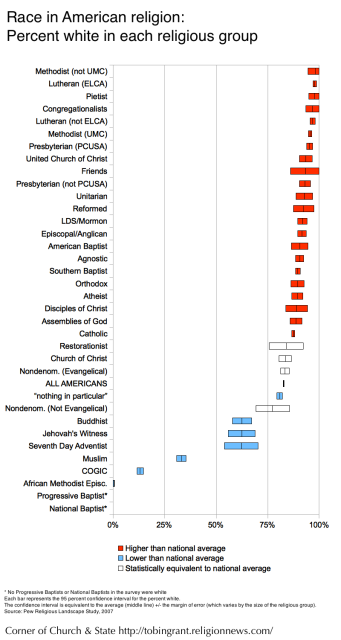 This graph is not offered for republication.

To gauge the diversity in America’s religious groups, I use the Pew Religious Landscape survey. This survey includes over 35,000 respondents, which means that we can get an accurate picture of religious groups. There are 2,559 people who specifically state that they are Southern Baptist. Even relatively small groups like Mormons or Reform Jews have around 500 people in the survey.

To see how the SBC compares to other groups, I look at a simple measure: what percentage of the SBC is white? I chart out the percentage white in each religious group. The graph shows the percentage (middle line) plus/minus the margin of error (the width of the block). Those that are red have a proportion white that is above the national average; blue groups are below average. Those groups that are clear are statistically the same as the national average.

Nine-out-of-ten Southern Baptists are white. But this isn’t that different than most other religious groups. Nondenominational Christians are slightly more diverse; Lutherans, Presbyterians, and Methodists have slightly higher percentages.

One reason for such high percentages is demographic: Most Americans are white. Moreover, some areas of the country are really, really white. And denominations reflect this. Lutherans are more common in Minnesota. Mormons are dominant in Utah neighboring regions. With few racial minorities around, these churches are bound to reflect the majority.

So, the real question isn’t what percentage white a church is. The question we need to ask is how well a church reflects the racial makeup of its region. 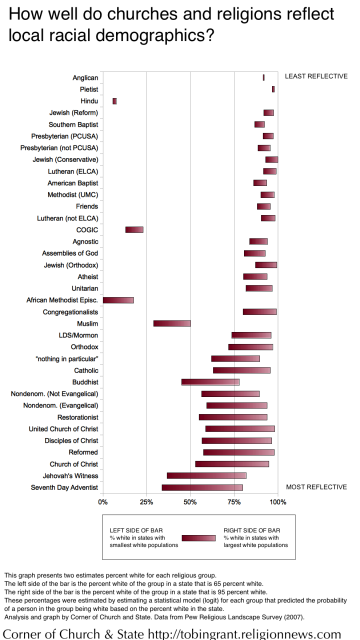 This graph takes a different look at the data. It presents the estimated range of percent white depending on the demographics of the state where the group’s members are located. Here’s how to interpret the graph.

Here is the problem for the SBC. Many in the SBC live in states with large minority populations, but their congregations remain almost all white. There are only a few religious groups that are so unreflective of their locales. Even in states with smaller white populations, around 87 percent of the SBC is white. The SBC isn’t the only group like this. Lutherans, Methodists, Presbyterians, and (especially) Episcopalians are similarly unreflective of their location.

Other churches are more reflective of their communities. Catholics, for example, tend to be the same as their communities. In states with large white populations, Catholics are almost all white. In states with more minorities, Catholics are also more likely to include minorities. The same could be said of nondenominational Christians, United Church of Christ (think of the Obamas), and Disciples of Christ, and the Church of Christ. Jehovah’s Witnesses and Seventh Day Adventist are less likely to be white, but they, too, have more whites join their congregations in states with larger white populations.

Finally, a note on those with no religion. Self-identified atheists and agnostics are more likely to be white than others in their states. But those who simply state that they have “no particular religion” tend to reflect local demographics.

Bottom Line: It’s not enough to just identify a church or religion is mostly white. Some are white because they are located in locations with fewer minorities. But others, like the SBC, remain stubbornly white regardless of their location.