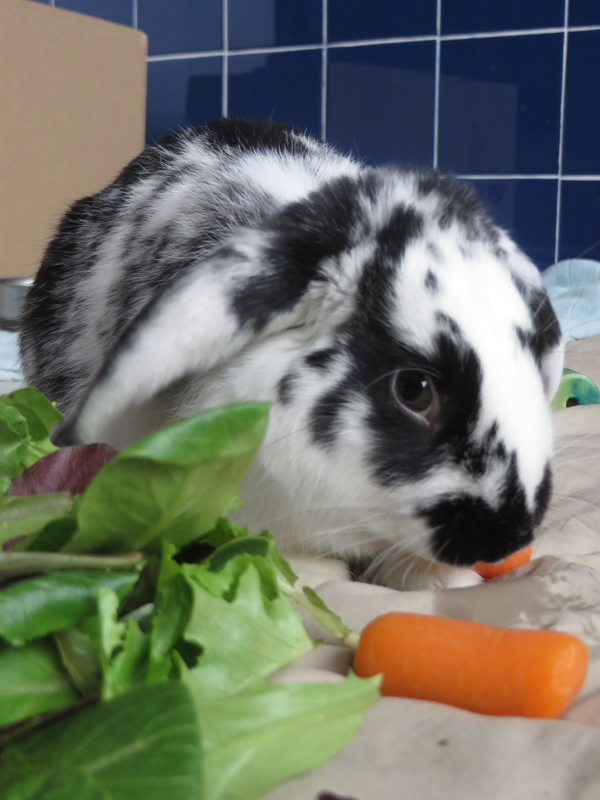 Prudence the rabbit, now about six months old, was jammed into a filthy crate and exposed to bitter cold. She is now up for adoption at PETA's animal shelter in Norfolk, Vir. Religion News Service photo by Lauren Markoe
March 12, 2015
Lauren Markoe

Prudence the rabbit, now about 6 months old, was jammed into a filthy crate and exposed to bitter cold. She is now up for adoption at PETA's animal shelter in Norfolk, Va. Religion News Service photo by Lauren Markoe

NORFOLK, Va. (RNS) Prudence the bunny nibbles on organic greens, listens to classical music and hops about on soft blankets in a sweet-smelling space larger than many college dorm rooms.

She shares her “guest room” with no other animal, though staff at the headquarters of People for the Ethical Treatment of Animals, working in the adjacent office, visit frequently to cuddle her.

Here on the banks of the Elizabeth River, you could say PETA runs the Waldorf Astoria of animal shelters.

But that same facility also euthanized more than 80 percent of the animals in its care last year, a rate so shockingly high that Virginia lawmakers passed a bill in February -- nearly unanimously -- to define a private animal shelter as a place where the primary mission is to find permanent homes for animals in this life, not send them on to the next.

The bill, its sponsor made clear, is designed to protect animals and rein in PETA.

PETA? The group that doesn’t want you to eat turkey at Thanksgiving -- or any animal ever? The same PETA that wants to free circus animals and pushed the Vatican to "give peas a chance" by going vegan and to strip the leather seats out of the popemobile?

“It’s sanctimonious to say they are lovers of animals,” said Republican state Sen. William M. Stanley Jr., the lead sponsor of the bill, who has never been to the PETA shelter but said it's clear it doesn't do much sheltering. "It's a way station of death, and it's a shame."

Virginia Gov. Terry McAuliffe has until March 29 to sign or veto the bill -- or send it back to be amended.

PETA is more widely known for its edgy protests and media campaigns to draw attention to animal suffering than for this riverside shelter, and some in the animal welfare community deem the group too radical. The high euthanasia rate at its shelter, the only one it operates, seems to many to run counter to its mission.

Daphna Nachminovitch, PETA’s senior vice president and head of its cruelty investigations unit, does not dispute that the vast majority of the thousands of animals in PETA custody each year are euthanized. 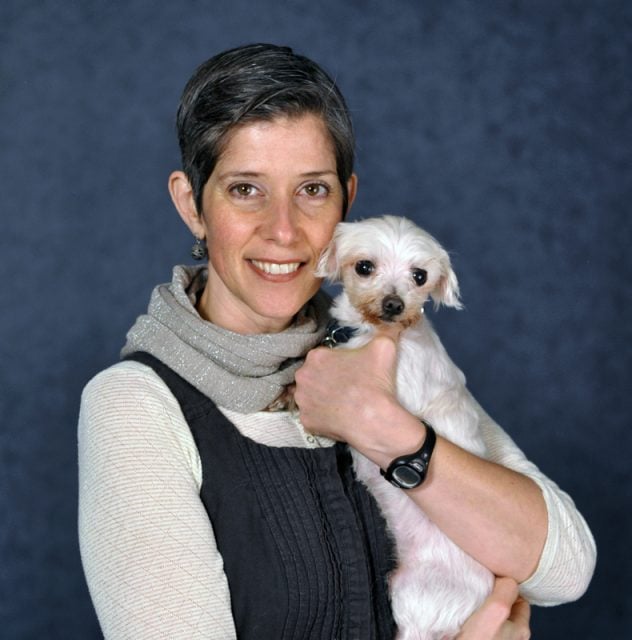 PETA Vice President Daphna Nachminovitch with Soupster, a dog rescued by PETA that will go to a permanent home. Photo courtesy of PETA

In 2014, according to its own records, it took in 3,017 animals, about 1 percent of the total number brought to Virginia public and private shelters. Of those, PETA euthanized 2,455, or 81 percent. In some prior years, that rate has risen above 90 percent.

Statewide, 210,599 animals wound up in Virginia animal shelters last year, according statistics compiled by the Virginia Department of Agriculture and Consumer Services. Less than a quarter -- 49,302, to be exact -- were euthanized.

The statistics, Nachminovitch said, have been twisted to demonize PETA, focusing attention on the tragic symptom of euthanasia instead of the root of the problem: millions of unwanted animals who suffer neglect and cruelty.

"You can count animals, but they're not numbers," she said. "And there are many fates worse than euthanasia."

PETA puts a high proportion of animals down, Nachminovitch explains, because it ministers to those that many other shelters turn away, often because of the shelters' "no kill" policies.

PETA staff will drive more than 100 miles beyond Norfolk, at any time and in any weather, to help animals that are gravely ill, infested with parasites or too aggressive ever to be adopted, she said.

And PETA doesn't care if the animal in need is a dog or a cat or a chicken or a rat, Nachminovitch continued. It doesn't matter if the owner can't or won't pay for the services. More than 500 of the animals it euthanized last year were brought in by owners who wanted to end their elderly or suffering pet's pain, she said, but couldn't afford the vet's fee.

But even for many who appreciate PETA's free and low-cost veterinary care, its mobile spay-and-neuter clinics or the hundreds of dog houses it gives to owners who insist on leaving their pets outside in bad weather, the euthanasia rate seems high.

Paul Waldau, a professor at Canisius College who studies and writes about religion and animal rights, said it makes sense that people who care about animals hold conflicting views of PETA, given both its dedication to animal welfare and the many thousands it has put to death.

"There's a certain plausibility to the line they're taking," said Waldau. "If you take the very worst problems that others can't solve,  your rate of putting dogs down is going to be much higher than anybody's who has taken on the simple problems, the easy ones, the golden retrievers of life." 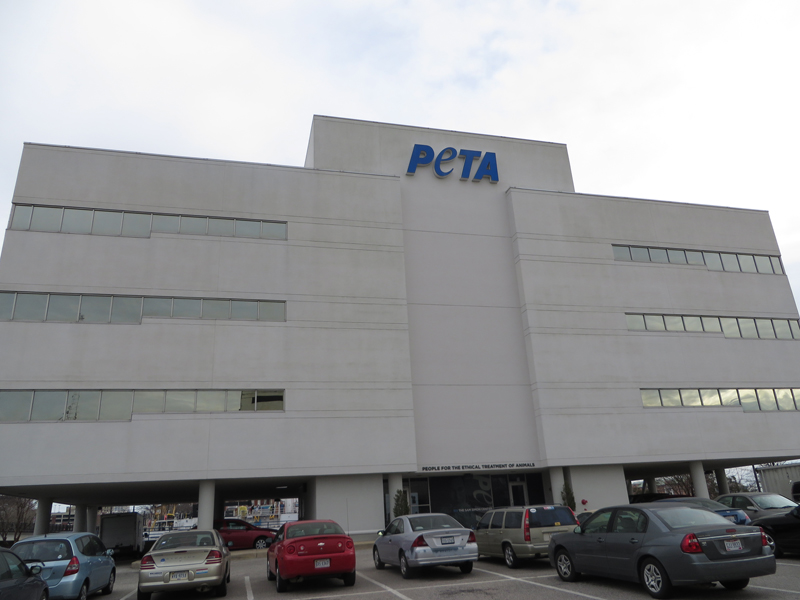 But PETA's euthanasia rate "is such an ugly number," Waldau continued. "We should also be welcoming people who say, 'Can't we find a way to kill fewer?'"

A spokesman at the Humane Society of the United States, the largest animal welfare group in the nation, said it would not comment on PETA's euthanasia rate or the bill in the Virginia Legislature. The Humane Society's statement on euthanasia supports the practice as a last resort.

PETA -- honored by many in the animal welfare community and many Hollywood celebrities -- has never won over mainstream America. It's the animal welfare group many people love to hate, perhaps because it’s not just for animals, but against many of the things people like do with animals, such as eating them for dinner and confining them in zoos.

"I don't think anybody likes the idea that they might need to change their behavior," said Nachminovitch. "We provoke people to think about their daily choices: what they eat, what they wear, where they get their entertainment. It's human nature not to want to feel sad or guilty." 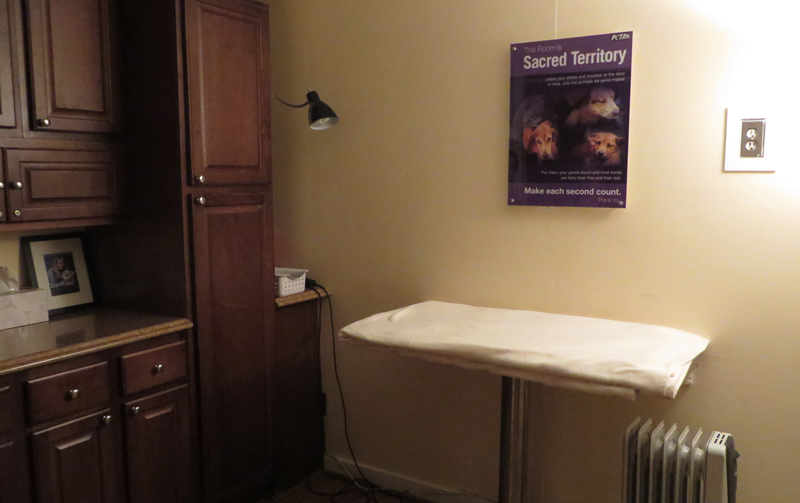 The room where PETA euthanizes animals inside headquarters along the Elizabeth River in Norfolk, Va. Religion News Service photo by Lauren Markoe

The group's reputation wasn't helped last October after news broke that PETA had taken a healthy Chihuahua from its owner's porch on Virginia's Eastern Shore and euthanized it. Nachminovitch said PETA was "devastated" by the mistake, and she drove to the owner's home and personally, tearfully, apologized. The employee was fired for what Nachminovitch said was a breach of PETA rules. But the dog's death was also a violation of state law, and Virginia fined PETA $500.

Stanley, the sponsor of the bill that could make it difficult for PETA to continue to run its shelter, has used the Chihuahua's death to question the organization's motives. He also talks about the four dogs he adopted, some with serious health problems, and wonders -- most recently in an op-ed in a major Virginia newspaper -- whether PETA understands that even sick and old animals deserve a chance to live.

"When I was a young man, my father told me that God put cats and dogs on this Earth as a reminder of the traits we should all aspire to have as human beings: perfect love, loyalty and forgiveness," he wrote in The Virginian-Pilot. "It is our obligation to care for them, love them, and above all else, do our level best to protect them."

It's great that Stanley adopted dogs in need of a home, Nachminovitch responded. "But there are millions more."

Last year, PETA transferred 353 pets to shelters that have larger adoption programs, and it placed 162 animals in permanent homes, its records show. It sent about 100 to foster homes.

Prudence the rabbit, who stays in one of the five cushy animal "guest rooms" that comprise PETA's shelter on the fourth floor of its headquarters, is going to be one of the lucky ones. Most of the time, PETA houses 10 or fewer pets awaiting adoption.

The euthanasia clinic is on the ground floor. There is one small room, softly lit by a standing lamp. A poster is mounted above the padded surgical table where the animals receive their lethal injections. It shows three dogs that PETA staff have cared for, and reads:

"This room is Sacred Territory. Leave your stress and troubles at the door. In here, only the animals we serve matter. For them, your gentle touch and kind words are likely their first and their last."