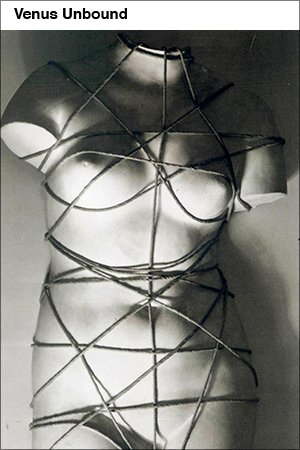 ROME (RNS) Following complaints, the Vatican’s cultural office has removed an image of a naked female torso bound in ropes that was used to advertise a women’s conference.

The Pontifical Council for Culture had chosen a photograph of the 1936 “Venus Restored” sculpture, by the late American artist Man Ray, as befitting for its Feb. 4-7 conference titled “Women’s Cultures: Equality and Difference.”

But the choice of a sculpture bound in ropes to discuss women’s emancipation was deemed inappropriate in some quarters. The Pontifical Council’s president, Italian Cardinal Gianfranco Ravasi, initially defended the choice. Ravasi was seen as a contender going into the conclave that elected Pope Francis two years ago.

“Cardinal Ravasi has chosen not to remove the image as it speaks clearly for one of the central points of the document: many women, alas, are still struggling for freedom (bound with rope), their voices and intellect often unheard (headless), their actions unappreciated (limbless),” according to a statement that appeared alongside the controversial image.

Both the message and the image have since been removed from the Pontifical Council’s website, replaced with a 15th-century Madonna and child image. Ravasi was not available to comment on the about-face.

“It was an act of courage to choose this image, because it’s very strong and features a nude woman,” she said. Caffiero noted, however, that a sculpture of oppression was contrary to the aims of the event it was used to advertise: “From the point of view of the scope of the document, perhaps it wasn’t the most suitable image.”

Richard C. Hamlin, trustee of the Man Ray Trust, said that while the sculpture was undoubtedly controversial, the meaning of the artist’s work should be left open to interpretation.

“His work was groundbreaking and frequently controversial in his own time, and so it is not surprising that controversy continues to arise when his work is displayed in a public forum,” he said.

News
NBA’s Biyombo brings Congo to the pope after trip canceled
Follow us on Facebook!
Submit your photos to RNS