Theologian Stanley Grenz once observed, "[Jesus] treated every woman he met as a person in her own right." According to a new book, The Day I Met Jesus: The Revealing of Diaries of Five Women from the Gospels by Frank Viola and Mary Demuth, Jesus' encounters with women tell us more than we might assume. Here I dialogue with co-author Mary Demuth, a prolific author and blogger, about what these tales teach us about God, life, and gender.

RNS: You say that Jesus' interactions with women were "shocking considering a woman's position during that time." Is this true and, if so, why is it significant?

MD: It’s significant because [tweetable]Jesus reserved some amazing Scriptural truth exclusively for women.[/tweetable] Consider his interaction with the Samaritan woman in John 4. She is part of a maligned race according to Israel, is a woman alone at a well and culturally should not be addressed by a man, and she is portrayed as immoral. But what does Jesus do? He has the longest recorded conversation with anyone in the Gospels. He reveals He is living water. He explains what true worshippers are. He says that a time is coming where the Kingdom of God will be for everyone, not simply Jews. And when she articulates truth about the Messiah, Jesus says, “I am He,” giving her a clear Messianic proclamation. Her interaction with Him and her subsequent sharing with the village results in Jesus essentially evangelizing a town of Samaritans. She is a missionary.

RNS: You include a diary entry from the woman with the flow of blood. What does her story say to modern readers?

MD: Many suffer from chronic conditions and feel abandoned by God. The woman with the issue of blood not only suffers from an incurable illness for more than a decade, but she also experiences social ostracizing as a result. Imagine not being hugged or touched for 12 years! She represents those who physically suffer and those who hurt emotionally. She doesn’t presume upon Jesus. She knows her smallness, yet she is desperate enough to risk defiling Jesus by touching his cloak. Most likely crawling to touch Him in the lowest place. And yet, even in her quiet reticence, Jesus notices her. Listens. And then he heals her. She is restored physically and communally in one beautiful instant. While Jesus may or may not physically heal us today, he absolutely notices us, meets us, and helps us heal from our wounds.

RNS: You recall story of the woman caught in adultery. What's going on behind the scenes here?

MD: Many scholars and readers of the Bible have noted that this woman was most likely set up in order to test Jesus and see what he would do with such a clear case of sin. Conspicuously absent is the “man caught in adultery.” He is never mentioned. Only she is left alone to bear the weight of public shaming, and, inevitably, death that will follow according to the Law. And yet, Jesus turns the tables on those that set this let’s-test-Jesus scenario. He issues a simple statement about sin, everyone leaves, and he alone stands with her. He alone has the power to condemn her, but he does not. Instead, he restores her to a new life.

RNS: This story is actually believed to be a later addition to the text and is not reliably present in early manuscripts. Why did you include it anyway?

MD: We were aware of this, and we deal with it in the chapter. While the story appears in some manuscripts, doesn't exist in others, and is placed in different parts of the Gospels in yet other manuscripts, most evangelical scholars believe the story is authentic for compelling reasons. 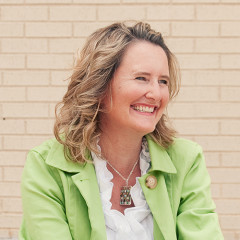 RNS: The story of the prostitute who anointed Jesus' feet has some oft-overlooked details. Tell us why this story is so illuminating.

MD: The woman had the prior intention of anointing Jesus, so she most likely heard Jesus preach or watched him heal or heard the cries of demons being exorcised. She didn’t just wander into the home and randomly pour perfume on Jesus. She meant to, as an act of worship. Unbinding her hair was a scandalous act, like a woman going topless in public today. Kissing the Lord's feet was perceived to be an erotic gesture, which is why the Pharisees were repulsed and shocked that Jesus would allow this woman to do this. Yet Jesus didn't rebuke her exhibition of extravagant love. Instead he defended it and rebuked the Pharisees. The God of the universe welcomed perfume that was paid for by prostitution, yet he condemned the self-righteous around her.

RNS: You refer to Mary of Bethany as "the woman whom Jesus loved." Why?

MD: The Gospel of John uniquely singles out Lazarus, and his two sisters, Mary and Martha as those whom "Jesus loved" on more than one occasion. Jesus spent time there. We see Mary making the most of her time with Jesus by sitting at his feet, the typical place for a disciple of a teacher--reserved for men. She did not care that she entered the central room and unabashedly sat in the place of a male disciple. Her love for Jesus and her fascination with Him and the theology he espoused trumped social norms. Jesus affirmed her risk and devotion while others must’ve mocked.

RNS: You're talking about bucking social norms and breaking taboos when it comes to gender. If Jesus were here today, where do you think he would fall in the church's gender debates?

MD: I know this: He wouldn’t jump into a specific theological camp in order to denigrate a person who held a different view. He wouldn’t demonize someone. Instead, I think he would ask a lot of questions, listen well, and then say something surprising. He does that constantly in the gospel accounts, where he confounds people with out-of-the-box responses.

RNS: Would Jesus be an egalitarian or complementarian today?

MD: The Gospel accounts don’t explicitly address this theological debate, and Jesus doesn’t say one way or another. These labels and camps are a 21st century construct. What I can say is that Jesus absolutely treated women differently than the prevailing religious authorities of his time. He dignified. He healed. He interacted. He debated. Women played a vital role in Jesus' ministry, standing with him at the cross, and seeing him first after resurrection.