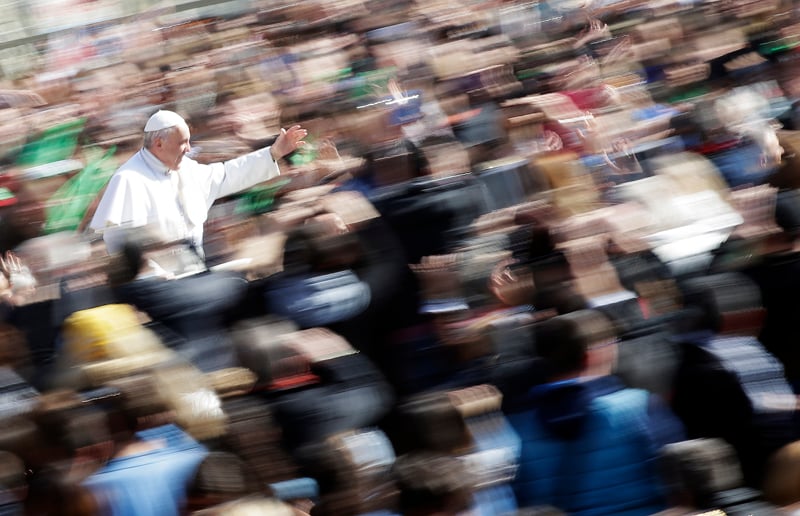 (RNS) Pope Francis appears more popular than ever among American Catholics, and he hasn’t even visited the U.S. yet, a trip that is planned for September and could well boost his visibility — and appeal — even further.

But will Francis find American Catholics filling the pews? Or just loving the pope from afar? That’s one of the big — and so far unanswered — questions about his remarkable papacy.

Now, one researcher may have found some signs, albeit tentative, of an incipient “Francis effect.”

Mark Gray of Georgetown University’s Center for Applied Research in the Apostolate crunched the Catholic numbers from the 2014 General Social Survey, the go-to resource for sociologists. The GSS began in 1972 and is conducted every two years using face-to-face interviews with a national random sample of adults.

Gray noted that when asked to characterize the strength of their religious affiliation, 34 percent of Catholics said it was “strong,” up from 27 percent in 2012, the year before Francis was elected. That 7-point rise was a “significant bounce,” Gray said.

There was also a decline in the percentage saying their affiliation with the Catholic Church was “not very strong,” down 6 points, to 56 percent.

“Again, this is not a massive shift by any means but it breaks a trend of consistently declining numbers of Catholics saying their affiliation is ‘strong’ in the last decade,” Gray wrote in a post on CARA’s blog.

Another marker of the strength of Catholicism, and any religion, is the retention rate — that is, the percentage of those raised in a faith who remain as adults.

Gray noted that the retention rate for Catholicism has been steadily declining since the early 1970s, from a high in the mid-80s to a low of 65 percent in 2012.

But the 2014 GSS showed that the rate remained steady for the first time. “Given recent history, even holding steady is an interesting result,” Gray said.

The endurance of Catholicism is also in contrast to the affiliation rates for Protestants and other Christians, which continue to decline sharply, dipping below 50 percent in 2014 for the first time.

The numbers on Catholic identity and enthusiasm track those found in other public opinion surveys, such as a Pew Research Center poll conducted a year ago, in February 2014.

Even so, neither the Pew survey nor the GSS data show any bump in Mass attendance, which is viewed as the surest benchmark of success for a pope who sees evangelization and outreach as the priority for the church, and his pontificate.

Yet the Pew survey showed that those who already go to church regularly were the most energized by the new pope.

“This suggests that if there was a ‘Francis effect,’ in the first year of his papacy, it was most pronounced among Catholics who were already highly committed to the practice of their faith,” Jessica Martinez of the Pew Research Center told reporters earlier this month.

The upshot: “The best news from the GSS for the church in 2014 is that some worrisome trends have halted,” Gray wrote.

But, he continued, “it will take another survey wave or two of consistent results to discern a real course ‘correction’ in the data,” he said. “This survey could be an outlier.”