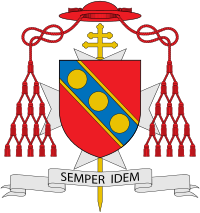 Coat of Arms of Alfredo Ottaviani

Reading the latest rumblings of Cardinal Raymond Burke, I had a sudden epiphany: He wants to be the Cardinal Ottaviani of the Francis papacy.

Ottaviani was the leader of the conservative forces that tried to stand in the way of the work of the Second Vatican Council. As Secretary of the Holy Office (later the Congregation of the Doctrine of the Faith), he lived up to his episcopal motto Semper Idem (“Always the Same”) in opposing the Council’s embrace religious liberty, liturgical innovations, and just about everything else. When Pope Paul VI accepted his resignation in 1968, the AP wrote, “In dramatic fashion it signified the move of the half-billion-member church away from rigid conservatism toward new experiments in modernism.”

The most provocative thing Burke did in his interview with LifeSiteNews was to say that “’faithful’ homosexuals, ‘remarried’ divorcees and non-married couples” were “like the person who murders someone and yet is kind to other people.” His great cause appears to be to turn back the efforts of German bishops led by Walter Kasper to have the second session of the bishops’ Synod on the Family moderate the way the Church deals with such murderers.

But whereas Ottaviani remained at his high post through Vatican II, Burke was removed as head of the Vatican’s highest court after the first session of the Synod by Pope Francis — and so, as my colleague David Gibson points out, his presence at the determinative second session in October is unlikely. Thus he has to content himself with issuing his criticism from outside, in his largely ceremonial capacity as patron of the Knights of Malta.

Asked by LifeSiteNews how best to “remain faithful to the Church and to the Pope in these troubled times,” he replied, “By adhering very clearly to what the Church has always taught and practiced; this is our anchor.” Semper Idem.