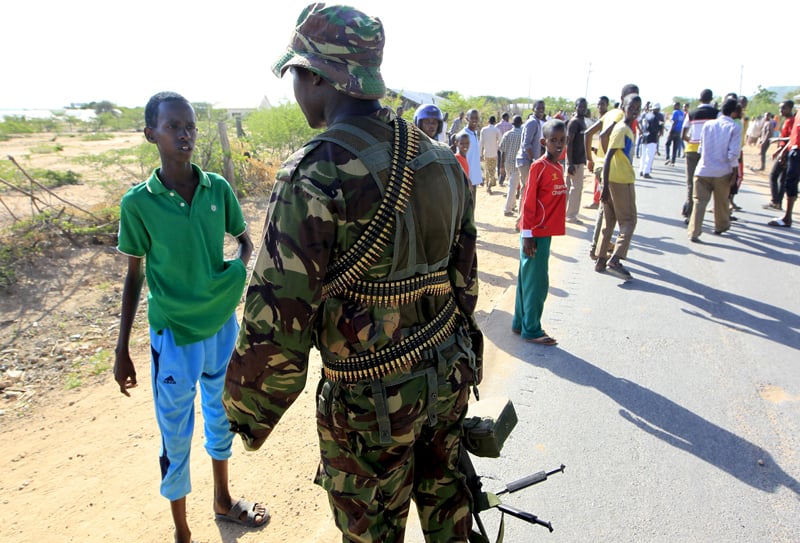 A Kenya Defense Force soldier stops a boy from moving in the direction where attackers are holding up at a campus in Garissa on Thursday (April 2, 2015). At least 14 people were killed on Thursday when Islamist militant group al Shabaab stormed the Kenyan university campus, taking Christians hostage and engaging security forces in a shootout for several hours. Photo courtesy of REUTERS/Noor Khamis *Editors: This photo may only be republished with RNS-KENYA-ATTACK, originally transmitted on April 2, 2015.
April 2, 2015
Fredrick Nzwili

A Kenya Defense Forces soldier stops a boy from moving in the direction where attackers were holed up at a university campus in Garissa on Thursday (April 2, 2015). Photo courtesy of REUTERS/Noor Khamis
*Editors: This photo may only be republished with RNS-KENYA-ATTACK, originally transmitted on April 2, 2015.

Five hundred of the hostages were reportedly rescued as the day went on, but it was unclear immediately whether the standoff had ended and exactly what the death and injury toll was.

The gunmen reportedly arrived at the university at 5:30 a.m., killed the guards at the gate and began shooting indiscriminately before taking hundreds of students hostage. The Kenyan military tried to end the siege and rescued hundreds of the hostages during a shootout.

Most of the hostages are believed to be Christians.

“It is very sad that this attack is happening during the Easter festivities,” said Roman Catholic Bishop Joseph Alessandro, who is based in the town of Garissa, where the attack occurred.

“Most of the students in the college are not from here, they are not Somali, and they are not Muslims,” he added.

More than 80 percent of Kenyans are Christian. But in northeastern Kenya, nearly 90 percent are Muslim.

President Uhuru Kenyatta urged Kenyans to remain calm as the government worked to resolve the siege.

The Muslim militant group al-Shabab took responsibility for the attack, according to Agence France–Presse, and confirmed it had taken non-Muslims hostage.

“When our men arrived, they released Muslims. We are holding others hostage,” AFP quoted Ali Mohamud Rage, an al-Shabab spokesman, as saying.

The university, the only academy of higher learning in the region, opened in 2011 and has a student population of about 800.

In December, 64 Christians were killed in Mandera town, further north of Garissa, in two separate incidents. The gunmen spared Muslims but shot Christians at close range.

In September 2013, al-Shabab attacked the Westgate shopping mall in Nairobi, killing 67 people and wounding 175. Those who could recite the Quran were spared.

Al-Shabab was launched in Somalia in 2006 with the aim of establishing a government led by Shariah. Recently, it spread in East Africa, establishing networks across the region.

(Tonny Onyulo of USA Today contributed to this report.)