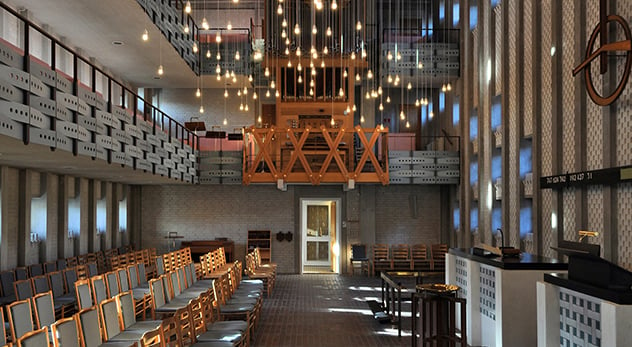 When it comes to church, theologian Scot McKnight says, different is good. He argues that it should be comprised of people who are dissimilar ethnically, socioeconomically and, to some degree, doctrinally. - (Image courtesy of Seier + Seier - http://bit.ly/1aKab5Z)
April 8, 2015
Jonathan Merritt

When it comes to church, theologian Scot McKnight says, different is good. He argues that it should be comprised of people who are dissimilar ethnically, socioeconomically and, to some degree, doctrinally. - (Image courtesy of Seier + Seier - http://bit.ly/1aKab5Z)

Growing up in the American Bible Belt means I have witnessed more than my share of "church splits." Sometimes these schisms occur over doctrinal differences, but often they arise from interpersonal issues such as disagreements over carpet color, placement of piano benches, and the spelling of "hallelujah." Some studies indicate there are as many as 19,000 "major, scarring church conflicts" in the U.S. annually.

But theologian Scot McKnight says that the Bible envisions churches of diversity, difference, and disagreement. In "A Fellowship of Differents: Showing the World God's Design for Life Together," he argues that church shouldn't be a two-hour Sunday experience where you see friends and hear a sermon with people like you. Rather it should be a mix of people living together who are dissimilar ethnically, socioeconomically and, to some degree, doctrinally. Here we discuss these ideas and where he would draw lines, if at all.

RNS: You say that the Apostle Paul envisioned a church with people who differ. In which ways should churches seek diversity?

SM: Paul mapped his universe with a series of binaries in Galatians 3:28 and Colossians 3:11. They were Jew-Gentile, slave-free, male-female, barbarian-Scythian. Race and religion and status and economics and gender and, while it is not clear, it appears the last one has to do with social status.

Paul provides a template here for our thinking: in Christ all things have been transcended to form a unity that establishes a new kind of community. Not by way of eradicating diversity but by embracing diversity in a deeper unity. One need not fear Jews losing Jewishness or females their gender; but those identities are transcended with a deeper unity in Christian fellowship that magnifies difference as it simultaneously embraces unity.

RNS: Some say that people are naturally drawn to those within their own ethnicity. Is a truly multi-ethnic church even possible?

I like your wording: “even possible.” You nailed it. You know the hill is steep and the path more than challenging. There’s not pretending here; we have seen that idyllic or even idle speculations won’t make it happen. So yes, it’s possible but nearly impossible. Hence, my book begins with Grace and then moves to Love, for only by God’s gracious power of transformation and God’s love awakening in us a love for others can we begin to form the kind of community that we are destined for in the kingdom of God. [tweetable]Someday the church will all be one; it's time for us to begin living out that unity.[/tweetable]

RNS: What about theology? Shouldn't there be boundaries to how much we should differ in fellowship?

RNS: The boundary is the gospel and what Carl Trueman calls the “creedal imperative,” the genuine need for clear articulations of what we believe. Salvation also forms a clear boundary: the differentedness cannot undo the gospel and its clear message about salvation.

RNS: You dedicate a whole chapter to sexuality, and some say that different views on this issue can exist within the same fellowship. What say you?

SM: First, yes, because different views are already at work in the church. More diverse perhaps than many pastors and priests and elders and leaders know. We are united not by “light”--what we know and what we agree on--but by new “life” in Christ--our redemption. In most churches, some will affirm traditional views on sexuality while others won’t. I am persuaded that we need to stay together as long as we can.

Second, no, if it means strident fighting for a view that undoes the Bible’s central themes and clear teachings or that demands everyone must agree all the way down the line. The crack-up for one denomination after another results from a failure to listen to one another, a failure to stay with one another as we grow in grace, and sometimes from a necessary departure from those we believe no longer respect the unity that God wants among us.

Third, everything we teach about sexuality needs to be framed by the themes of grace and redemption. The aim is redemption and we must turn ourselves toward the cross and resurrection for that redemption. God does the redeeming, not us.

RNS: You also have a whole chapter on salvation, and many churches separate over convictions on this issue. What is the solution?

SM: I assume you mean theories of salvation and justification and even subsitutionary atonement. Once again, we are looking at Christians who have genuine disagreements based on acceptable methods and attentive exegesis, who think any other view departs from the genuine faith. There are a few variant metaphors for salvation and atonement and none deserves control of the doorway. Instead we magnify the work of our God by exploring each of the images of salvation and turning each loose to reveal to us the grace of God. We damage the expansiveness of our witness when we force all metaphors to submit to our preferred metaphor.

RNS: You talk about "the table" as an important concept in building this kind of church. Explain.

SM: For us to become the church God wants – the church we will be in the kingdom of God in the new heavens and the new earth – we must learn now the art of table fellowship. Christians have created a pulpit culture where the faithful sit in pews to listen and greet and sing and then leave.

September 3, 2020
Related Posts
By Jack Jenkins, Emily McFarlan Miller
Citing Scripture, Pence switches out Jesus for the American flag in convention speech
By Sameer Yadav
Trump was right. God can be hurt. But not by Biden election, say theologians
By Associated Press
Apt Bible passage at Catholic Mass coincides with earthquake
By Emily McFarlan Miller
State of the Bible: Left unread during the coronavirus pandemic
By Robert K. Vischer
Will the death of George Floyd sway white evangelicals on race?