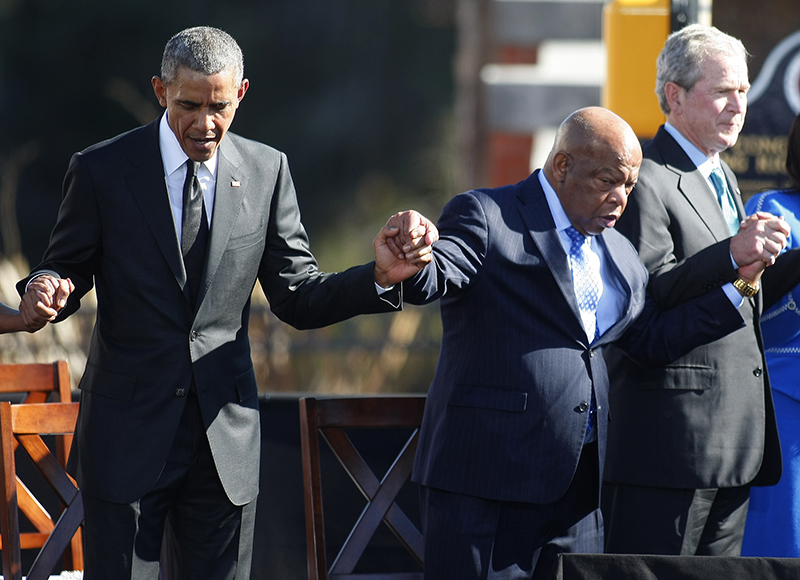 Left to right, President Barack Obama, U.S. Rep. John Lewis and former President George W. Bush hold hands during a prayer in Selma, Ala., on March 7, 2015. Obama delivered remarks at the Edmund Pettus Bridge to commemorate the 50th anniversary of the Selma to Montgomery civil rights marches. Photo courtesy of REUTERS/Tami Chappell
*Editors: This photo may only be republished with RNS-BARBER-COLUMN, originally transmitted on April 9, 2015.

(RNS) From Ava DuVernay’s award-winning film to President Obama’s speech at the Edmund Pettus Bridge, America has remembered Selma this year. We have honored grass-roots leaders, acknowledged the sacrifices of civil rights workers and celebrated the great achievement of the Voting Rights Act. At the same time, we have recalled the hatred and fear of white supremacy in 1960s Alabama. But we may not have looked closely enough at this ugly history.

Even as we celebrate one of America’s great strides toward freedom, the ugliest ghosts of our past haunt us in today’s “religious freedom” laws.

Many able commentators have pointed out the problem of laws that purport to protect a First Amendment right to religious freedom by creating an opportunity to violate other people’s 14th Amendment right to equal protection under the law. But little attention has been paid to the struggle from which the 14th Amendment was born — a struggle that played out in Selma 50 years ago and is very much alive in America’s statehouses today.

We cannot understand the new religious freedom law in Indiana and others like it apart from the highly sexualized backlash against America’s first two Reconstructions.

The 14th Amendment to the Constitution was part and parcel of America’s first Reconstruction, guaranteeing for the first time that people who had been legally codified as three-fifths persons would enjoy equal protection under the law in this country.

The very notion of equal protection for black Americans was so offensive it inspired an immediate backlash.

White preachers led the charge, calling themselves “redeemers” and framing equal justice for black Americans as a moral danger. At the same time, the threat was explicitly sexualized. Black men were portrayed in respectable newspapers as “ravishing beasts,” eager to rape white women.

In our native North Carolina, white vigilantes were armed and encouraged to defend their women, leading to the “Wilmington Race Riot” of 1898. Violent demonstrations of white men’s sexual fear led to lynchings throughout the South and Midwest.

When the civil rights movement — a Second Reconstruction — was finally able to draw national attention to the vicious patterns of Jim Crow in the 1960s, the challenge to white power was again conflated with sexual fear. Civil rights workers were consistently accused of wanting interracial sex and/or having homosexual tendencies.

We remember Dr. Martin Luther King Jr.’s “How Long? Not Long” speech from the Alabama state Capitol at the end of the Selma to Montgomery march. But we often forget that the members of the Alabama Legislature responded with Act 159, citing evidence of “much fornication” among marchers and claiming “young women are returning to their respective states apparently as unwed expectant mothers.” When Sheriff Jim Clark of Selma published his popular memoir the next year, he pointedly titled it “The Jim Clark Story: I Saw Selma Raped.”

The pattern is clear: Whenever established power brokers have felt threatened in America’s history, they have responded by stirring up sexual fears.

We who know this history can see that public expressions of concern about the “gay lifestyle” are not about religious freedom. They are about dividing an increasingly diverse electorate that has twice elected a black president. Fear of gay rights has proved to be the most effective strategy for extremists determined take over America’s statehouses.

As Southern preachers, we say to our fellow ministers: Religious freedom laws are an immoral ploy to stir up old fears. As people of faith, we must oppose them.

But in light of this ugly history, we also say to our progressive sisters and brothers: It’s not enough to simply stand with the LGBT community. We who are concerned about LGBT sisters and brothers must also see that the attack against them is also an attack on voting rights. While it is heartening to see business leaders and even the NCAA challenge Indiana’s law, we need the same forces to stand together against ID laws and redistricting plans aimed at restricting voting rights.

Right here in North Carolina, the proposed “religious freedom” bill goes so far as to say that government employees could choose not to carry out their duties because of a religious objection. 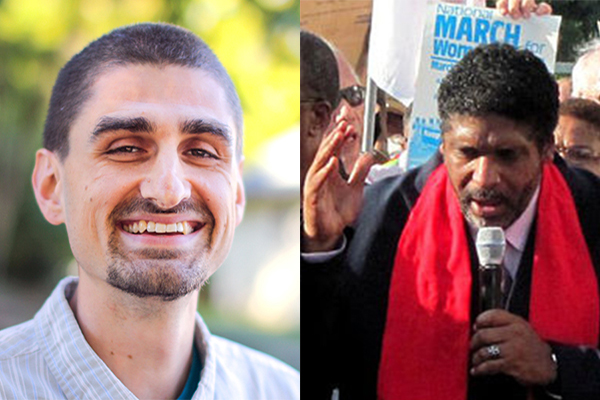 The Rev. William J. Barber II, right, is president of the North Carolina NAACP. Jonathan Wilson-Hartgrove, left, is author of “Strangers at My Door.” He lives in Durham, N.C., where he founded the Rutba House, a house of hospitality. Hartgrove photo by Pilar Timpane, Barber file photo

While conservatives’ concern today may be a religious objection to issuing a marriage license to gay couples, we remember well the religious reasons our neighbors in the South gave for segregation, the subjugation of women and race-based slavery. Freedom of religion, a bedrock of American democracy, cannot mean a license to condemn others.

Fifty years ago, thousands marched in Selma as part of a faith-rooted, moral campaign to secure an expansion of voting rights. Extremists who couldn’t deny their cause sought to distract and divide the country by using moral and religious language to stir up old sexual fears. The mystery money and secretive organizing behind today’s “religious freedom” bills seek to do the same.

We who preach the good news of “freedom to captives” must make clear that religion serves the common good when it cries out against injustice, not when it fuels culture wars by dictating personal morality. We would do well to pay attention to the moral witness of those who most now agree were on the right side of history.

(The Rev. William J. Barber II is  president of the North Carolina NAACP, architect of “Moral Mondays” and author of “Forward Together: A Moral Message for the Nation. ” Jonathan Wilson-Hartgrove is author of “Strangers at My Door.” He lives in Durham, N.C., where he founded the Rutba House, a house of hospitality.)