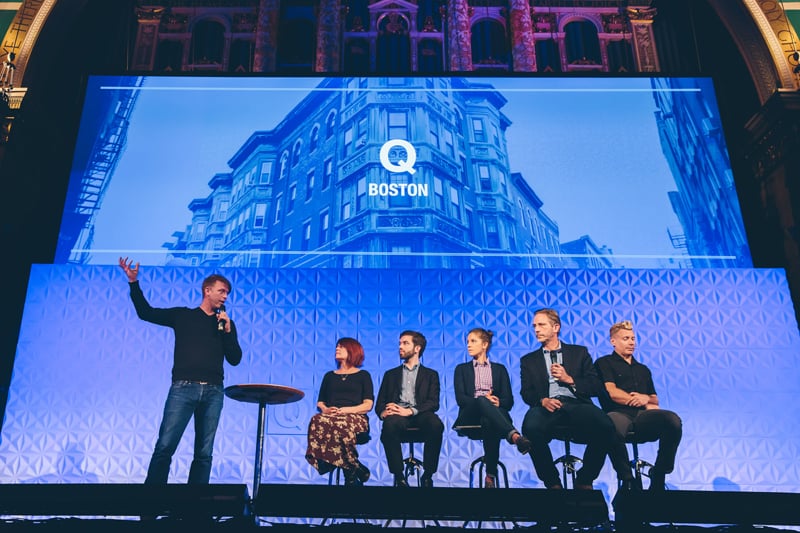 BOSTON (RNS) Only a few dozen worshippers attend Boston’s Tremont Temple Baptist Church on a typical Sunday, but the historic church was once so prominent that legendary preacher Dwight L. Moody called it “America’s pulpit.”

This week, Tremont’s massive auditorium played host to influence once again when 1,300 Christian leaders gathered for the Q conference to discuss the most pressing issues facing their faith. There was no official theme, but one strand wove its way through multiple presentations and conversations: America’s — and many Christians’ — debate over sexuality.

While at least three other Christian conferences during the past year focused on same-sex debates, this is the only one to bring together both pro-gay speakers and those who oppose gay marriage and same-sex relationships.

“The aim of Q is to create space for learning and conversation, and we think the best way to do that is exposure,” said Q founder Gabe Lyons. “These are conversations that most of America is having, and they are not going away.”

Which is not to say Lyons’ decision was without controversy.

Eric Teetsel, executive director of the Manhattan Declaration project that aims to rally resistance to same-sex marriage, urged Lyons to rescind his invitations to pro-gay panelists, whom he called false prophets professing to be Christians. Owen Strachan, president of the Council on Biblical Manhood and Womanhood, echoed the sentiment and tweeted that he was “shocked that @QIdeas features pro-‘gay-Christianity’ speakers.”

Lyons did not respond publicly to the criticism, but said such positions were rooted in fear.

“Some people are afraid that if those who are theologically progressive are invited, it suggests they hold an equally valid idea,” Lyons said. “We still believe the historic view of sexuality is true, but we are also confident that the trueness of that view can carry its own weight.”

By committing to this sort of dialogue, the Q conference is a microcosm of the larger debate on same-sex issues happening around many kitchen tables in Christian America. These conversations have moved beyond outmoded questions such as “Is homosexuality a choice?” and “Can gay people be made straight through prayer and counseling?” and instead wrestle with biblical interpretation and questions of how LGBT people of faith should live.

But more importantly, the shift in this year’s Q conference reflects the reality that those conversations do not occur in echo chambers of monologue, isolated from those who disagree. They happen between gay and straight people, between traditionalists and progressives, between young and old. Some are maintaining their long-held views, others have changed their minds, and still others aren’t really sure what they believe.

Richard Stearns, president of the humanitarian group World Vision U.S., discussed his organization’s controversial decision to hire people in same-sex relationships and the agency’s abrupt reversal. “World Vision never changed our view of biblical marriages,” he said, but was merely trying to find common ground on a divisive issue.

Even when the speakers weren’t discussing sexuality, they seemed to be discussing sexuality. Andrew Sullivan, a gay writer who formerly blogged at “The Dish,” spoke on how intellectual diversity makes us better people. Gordon College President Michael Lindsay, who sparked controversy when he reaffirmed his school’s conservative stance on homosexuality, delivered a talk titled, “Do We Have to Agree?”

A pre-conference survey found that almost half of those in attendance were church leaders, and 53 percent held graduate degrees. Thirty-one percent self-identified as “conservative,” 8 percent as “liberal,” and 59 percent as either “independent” or “moderate.”

Tension rose during two discussions moderated by Lyons that pitted one side against the other. One explored whether the church’s historical teaching on sexuality was reliable. For this, California pastor Dan Kimball argued that pro-gay Christians were elevating their personal experiences with LGBT friends and family over the clear teaching of Scripture.

On the other side, David Gushee, a prominent evangelical ethicist who recently announced he had changed his mind to become LGBT-affirming, countered that traditional interpretations of relevant passages of Scripture were flawed and amounted to a “toxic body of tradition that bears bad fruit.” 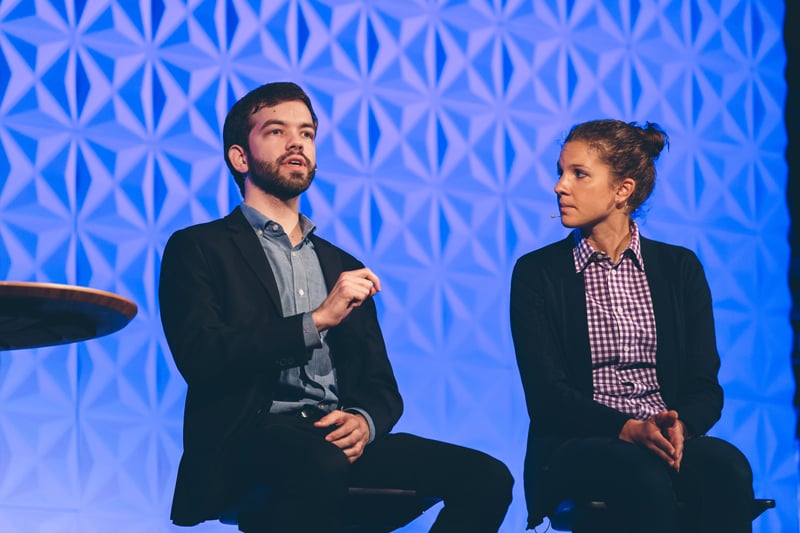 Another panel on “The Church’s Gay Dilemma” featured two Christians who identify as LGBT. Julie Rodgers, a leader among the increasingly visible movement of celibate gay Christians, argued from the right, and Matthew Vines, author of “God and the Gay Christian: The Biblical Case in Support of Same-Sex Relationships,” took the opposing side.

While they differed on whether the Bible allows for committed same-sex relationships, they both emphasized the need for Christians to make amends for their historically poor treatment of LGBT persons. Vines said straight people should acknowledge their “history of oppression,” and Rodgers said Christians should “repent of our treatment of gay and lesbian people.”

And on that point, the divided crowd was united, erupting in multiple rounds of applause.

Lyons, whose 2007 best-selling book “unChristian” included research indicating that Christians were perceived as “too political” and “anti-gay,” said he personally believes the Bible prohibits homosexual activity. At Stanford University in 2013, he debated the matter with openly gay Episcopal Bishop V. Gene Robinson.

Lyons said his debate with Robinson taught him about the importance of listening to those on the other side, and inspired his decision to include a range of voices at the Boston conference.

The conversations at Q — both onstage and off — do not mirror the raging debates common on cable news networks, but they more closely resemble the national conversation as it occurs in many homes, workplaces, and churches. And in this way, it may be a model for other Christian organizations who are seeking to engage the same-sex debate.

As Lyons said from the same stage where Frederick Douglass first read the Emancipation Proclamation, “What starts in Boston tends to work its way around the country.”