The LDS musician is especially excited for the group’s City June 10 stop in Salt Lake City, where she has many good friends. “I probably have more friends there than here, in little Ireland,” she told me last week during a Skype interview. “We’ve had so many missionaries that have served here that I’ve stayed in contact with, and Americans who have been in our ward, and also work connections that I’ve made in America.”

This winter and spring, Sharpe has been putting in long days to get herself tour-ready. It’s twice as much work now as the first time she was in the show (2008-10) since this time she is pinch-hitting for two different people, covering for one regular during the tour’s first three weeks and another during the last five.

“My brain is scrambled!” she laughs. “I won’t be able to just sit back and relax those first few weeks. Just as I get comfortable with Mairéad’s part, I’ll switch and do Lynn’s shows.” There’s also “a lot more dancing this time around.”

It’s clear, though, that she wouldn’t trade the experience. “It’s very fun and exciting for the fans, to bring back the pre-existing girls.” It’s the first time Celtic Woman has brought together so many of the singers who have been involved in its various tours through the last decade.

Leaving Celtic Woman five years ago was tough, Sharpe concedes, but at that time she felt she needed to be home with her son, now thirteen. “I’m a single parent, so it was very hard to be on the road,” she says. “I don’t feel so bad going away this time, because he’s more independent now, and it’s also for a shorter time.”

But Sharpe has hardly been idle these past five years. She returned to her early roots in musical theater, including some pantomimes in the UK. She loved getting to play Maleficent — “a baddie,” as she jokes – and the challenge of developing new roles. “I like that variety,” she says. Something like Celtic Woman is “nice for the financial security, but as performers we need to be challenging ourselves. If you’re not a little bit scared and insecure, you’re not challenging yourself enough.”

She also recorded her first solo album, the LDS-themed Be Still My Soul. Filled with some of Sharpe’s favorite church songs and hymns, the collection also features some new songs, including the popular and heartfelt “His Name,” written by a California friend.

“The album was recorded to send out the message that people are not alone even if they feel alone. They have a Heavenly Father and he loves them,” she says.

Sharpe was a baby when her mother converted to Mormonism from Catholicism. “My mom had a lot of questions and wasn’t getting the answers she wanted from the priests, so when the Mormon missionaries knocked on her door she asked them her questions, and they had answers,” she says.

However, it wasn’t always easy. “She was inactive for some years, not because she lost her testimony, but because she was raising three kids on her own and it was tough. She was a young widowed mother. Back then, classes were split over a weekend, on Saturday and Sunday, and it was two bus rides to get to church.”

Today, Sharpe is active in her ward when she’s in town. Her most recent calling was to be the nursery leader, which she loved. “It was a nightmare trying to get people to stay in nursery callings, but I had great fun,” she says.

She had to leave that calling in December to take a job in Cork.

“I’ve been back [home] since January but I haven’t been approached about a calling. And the bishop knows I’m going to be gone for most of the summer. So right now I’m enjoying a break from having a calling, but it’s still very busy. I teach in a theater school, and I’ve been trying to get them ready for their big concert, and learn all the Celtic Woman music and choreography. It’s busy, but it’s all good.” 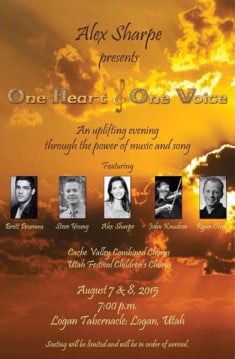 She’s also preparing for her own first solo concert, which will take place in Logan, UT, on August 7 and 8. “Everybody has caught the spirit of this,” she says, noting with pride that the musicians for “One Heart and One Voice” are all volunteers, and the concert will be free to the public. “We just want to share our talents.”

At nearly 44, she’s a latecomer to the idea of a solo concert, mostly because she “wasn’t comfortable with putting myself forward.” She’s unsettled by the kind of celebrity attached to something like Celtic Woman, for example, which she says was her first experience with that kind of fandom.

“It didn’t fit with me until I was gone and received a lot of very positive feedback from people about how the [CW] music had uplifted them,” she says. Seeing how the music could touch people’s lives so deeply propelled her to consider the solo concert.

“I really believe that if the Lord has a plan for something to happen, it does,” she says.