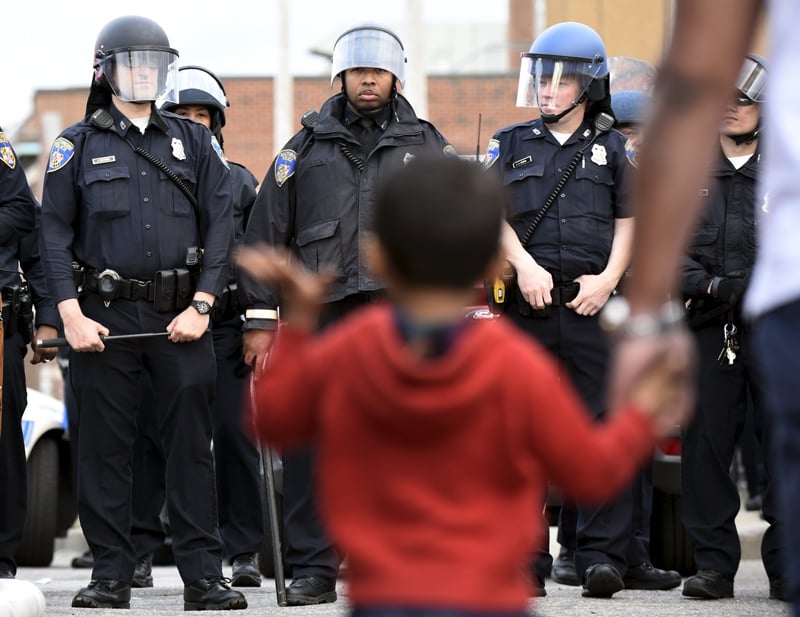 A child waves at law enforcement officers on Pennsylvania Avenue in Baltimore on Monday (April 27, 2015). Hundreds of rioters looted businesses and set buildings on fire in Baltimore on Monday in widespread violence that injured at least 15 police officers after the funeral of Freddie Gray, a 25-year-old black man who died after he was injured in police custody. Photo courtesy of REUTERS/Sait Serkan Gurbuz
*Editors: This photo may only be republished with RNS-EHRICH-COLUMN, originally transmitted on April 28, 2015.

My favorite is “Blue Bloods,” following the “Reagan” family from terrorist threats to homicides to domestic violence.

I can’t imagine what it’s like to be a cop. Perhaps routine marked by bursts of frenzy, some of it life-threatening. One’s hometown seen through the lens of crime, tragedy and evil. Low pay, high risk.

I like “Blue Bloods” because it shows upright law enforcement taking “Protect and Serve” seriously and making brave and ethical choices.

These shows are quite unrealistic, of course. Crime doesn’t get solved that easily or snap decisions made that wisely.

I don’t think, however, that I realized until recently how separated from reality those fictional accounts have been. As police shootings of unarmed citizens go viral, as minorities talk of long-standing police brutality, as we watch guards beating prisoners and as federal law enforcement engages in creepy surveillance, internal corruption and the arming of local police as military commandos, the veil is lifted.

Now we see in our own American law enforcement the same brutality and power-madness that have marked corrupt societies we supposedly surpassed, from the secret police in Eastern Europe to uniformed thugs in South America.

I find it confusing. Not the discovery that TV isn’t real, but to see how low we have fallen. Has this brutality been the dark side of police work all along? African-Americans beaten by Southern sheriffs might say “yes.” So might gays brutalized by police. Or striking miners slaughtered by Rockefeller-paid troops in Ludlow, Colo.

Power flows to wealth, and the wealthy use power to protect their interests. The marginalized have never been treated well, despite a Declaration of Independence naming them as equals and a Constitution enumerating their rights.

This isn’t a screed against law enforcement. Police officers do too much good for any blanket condemnation. Moreover, proving Lord Acton’s dim view that “power tends to corrupt,” brutal police officers are no more numerous than abusive parents, tyrannical bosses, gangs with automatic weapons, dimwits packing heat in churches, banks preying on the vulnerable, bishops protecting child molesters or politicians savaging the vulnerable in pursuit of donations.

The difference is that we viewed law enforcement as our protection against the bullies, not as one more source of danger. A nation grounded in laws and justice requires a trained cadre whose work is to enforce laws fairly. We thought we had that cadre.

It is disheartening to learn that some law enforcers proceed selectively, not fairly; brutally, not professionally; taking personal delight in using weapons against the defenseless.

Is it a few or many? That question haunts us. Selma became Los Angeles, Ferguson became Baltimore, Louisiana’s nightmarish prisons became New York’s Rikers Island, Hoover’s paranoia became the calculating law-breaking and law-bending of the NSA and FBI.

But then you have police streaming toward the ground zeroes of tragedy, risking their lives for the public. You have bold regulators standing up to corporate bullies like Comcast and Chase Bank.

It isn’t all bad, but neither is law enforcement as noble as we might have thought. We trusted these holders of power to be better than the usual scoundrels. Sadly, many haven’t been better.

What now? I don’t think we know. And that is a scary prospect for a society that can only exist as democratic and free if laws are enforced fairly and wisely.