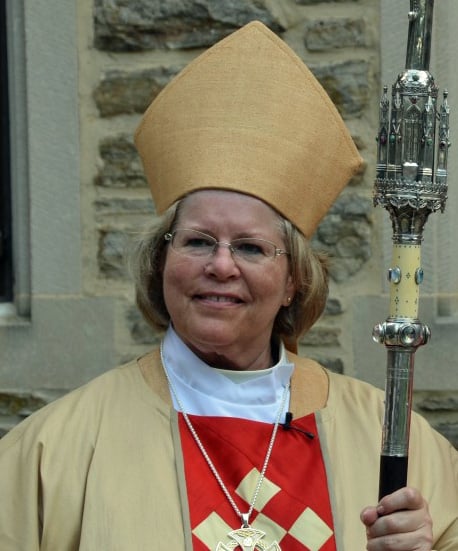 WASHINGTON (RNS) An Episcopal bishop in Maryland who’s facing manslaughter charges in the drunk-driving death of a bicyclist has been defrocked and “will no longer function as an ordained person in the Episcopal Church.”

Heather Cook was a suffragan (assistant) bishop in the Diocese of Maryland when she was charged with manslaughter in the Dec. 27 hit-and-run death of cyclist Tom Palermo, a 41-year-old husband and father of two, in Baltimore. Within a month of the accident, the diocese that she had helped lead for just three months asked her to resign.

Cook, who is free on bail and seeking treatment for alcoholism, faces 13 charges including drunken driving, leaving the scene of an accident and causing an accident due to texting while driving.

On Friday (May 1), Episcopal Church headquarters in New York issued a brief statement saying that Cook had reached a mutual “accord” with Presiding Bishop Katharine Jefferts Schori that will leave her “deposed,” or stripped of her ordination as a priest and bishop.

In February, Jefferts Schori had suspended Cook from the ministry, directing her not to present “yourself out as an ordained person of this Church in good standing.” Her diocese also asked her to resign.

Also on Friday, the Baltimore-based diocese said it had accepted Cook’s resignation, independent of her agreement with the national church. “This means that Cook is no longer employed by the diocese,” the brief statement from Bishop Eugene Sutton and lay leaders said.

The agreement deprives her “of the right to exercise the gifts and spiritual authority of God’s word and sacraments conferred at ordination,” according to the statement.

The statement said the agreement resolves all pending disciplinary cases against Cook with the national church, but does not resolve her criminal charges, or any “employment matters” with her former diocese.

Friday’s statement did not specify which church law Cook had violated, but in February Jefferts Schori cited “alleged criminal conduct in connection with an automobile accident on December 27, 2014 and misrepresentations” about Cook’s history with alcohol during her election as bishop.

Cook’s case has deeply troubled many within the Episcopal Church — prompting questions about alcohol abuse within the clergy, the church’s sometimes easy access to alcohol, how long church leaders knew of her illness and whether the delegates who elected her in September were informed.

The Rev. Gay Clark Jennings, president of the House of Deputies, one of two main governing bodies of the 2 million-member denomination, appointed a committee to review the church’s 1985 policies on alcohol and drug abuse and to propose new resolutions to be considered at the church’s General Convention, in Salt Lake City from June 25 to July 3.