Ikeita Cantu, left, and Carmen Guzman, of McLean, Va., hold signs in front of the Supreme Court on April 28, 2015, as justices inside considered arguments about legalizing same-sex marriage nationwide. They were married in 2009 in Canada. Religion News Service photo by Adelle M. Banks

Mr. Chief Justice and may it please the court:

As you and the other justices of the Supreme Court consider whether to strike down marriage equality bans in Ohio, Michigan, Tennessee and Kentucky, I want to speak to you as the parent of an adopted child and as a priest.

In his argument before your bench last week, John Bursch, the lawyer defending Michigan’s ban on same-sex marriage, argued that the state has an interest in denying the rights and responsibilities of civil marriage to same-sex couples because “when you change the definition of marriage to delink the idea that we’re binding children with their biological mom and dad, that has consequences.”

A claim so sweeping should be supported by facts, but those facts don’t exist. What do exist, however, are families in which single parents, same-sex couples, opposite-sex couples, grandparents and relatives are making profound personal sacrifices to raise children whom they love passionately, whether they are related to them by blood or not.

It may be bumper sticker philosophy, but it’s nonetheless true that love — intense, deeply committed love — makes a family. But as long as same-sex couples are refused the right to marry, their families, which may include both their biological and adopted children, will be denied basic legal protections and advantages. The government has no reason to make these children suffer to ward off Mr. Bursch’s difficulty in understanding different kinds of families.

Some of the questions asked of the lawyers for both sides had a familiar ring for me. The Episcopal Church, which I serve as a priest in the Diocese of Ohio and as president of the House of Deputies, has been struggling to articulate its understanding of marriage — both Christian and civil — for more than 40 years. During that time, we have asked, just as you and Justices Kennedy and Alito did last week, whether we had the wisdom and authority to revise age-old thinking, whether we were moving too quickly, whether we were the right institution to lead this change.

During some of those years, we were also examining the Doctrine of Discovery, the principle supported by both papal bulls and a U.S. Supreme Court ruling, that lands not governed by a Christian ruler were open to discovery and conquest. This pernicious idea cast a cloak of theological respectability over the worst excesses of colonialism. As Christians and as citizens, we waited too long to repudiate the racist foundations on which this unjust and exploitative doctrine was rooted.

Waiting too long to acknowledge and make amends for our moral failures is one of the besetting sins of my faith and my country. I hope you will not hesitate to right the wrong put before you in this case simply because it has been in place for so long.

In 35 years of ordained ministry, it has been my privilege to know many faithful, committed same-sex couples whose love gave me a deeper understanding of God’s love and whose joy in one another testified to the goodness of God’s creation. I have also learned through simple, everyday experience that same-sex couples make vital contributions to our civic life. They work hard, raise children, volunteer and pay taxes, just like opposite-sex couples. There is no reason that they should not enjoy the same dignity and legal protections.

No religion’s belief or practice should be permitted to restrict the rights of people to marry and receive equal protection under the law, and no one’s religious freedom is threatened by ending unjust legal discrimination. Existing laws rooted in the First Amendment protect any clergyperson who objects to same-sex marriages from being required to participate. Religious organizations already enjoy significant protections in hiring individuals who share their beliefs for ministerial roles, and religious charities that do not accept government subsidies are not required to place adopted children with same-sex couples. 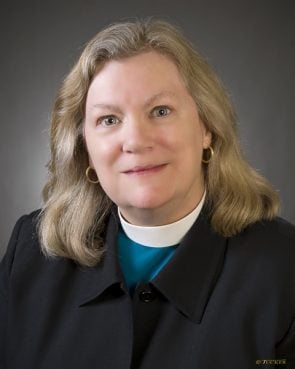 People who argue against marriage equality frequently do so for religious reasons, even if they cast their argument in secular terms. While I believe there are strong constitutional arguments for striking down bans on marriage equality, I support striking down these bans because of my faith, not in spite of it.

For too long, religious institutions have contributed to the scourge of homophobia that fuels the discrimination that this case seeks to strike down. Far too many of us are familiar with the discrimination, fear and violence that gay and lesbian people have suffered while people of faith turned a blind eye or, worse yet, acted as perpetrators.

(The Rev. Gay Clark Jennings is the president of the Episcopal Church’s lay and clergy House of Deputies and is a member of the worldwide Anglican Consultative Council.)