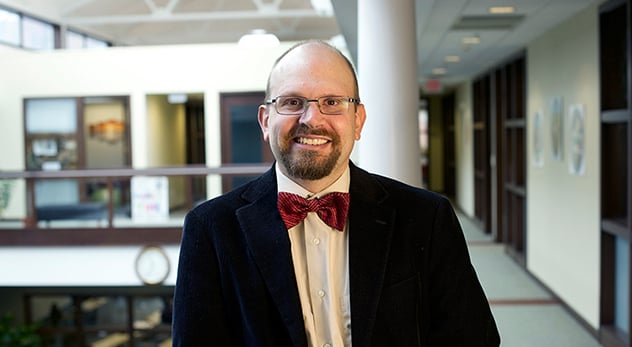 J. Todd Billings is the Gordon H. Girod research professor of Reformed theology at Western Theological Seminary and author of several award-winning books such as The Word of God for The People of God and Union With Christ. – Photo courtesy of J. Todd Billings

In a classroom in Holland, Michigan, a 39-year-old man in a bowtie stands to deliver a lecture. Peeking out from behind his glasses, he surveys the eager students who have come expecting a lecture on theology. Instead, he tells them that he has just been diagnosed with a rare and incurable cancer.

J. Todd Billings is the Gordon H. Girod research professor of Reformed theology at Western Theological Seminary and author of several award-winning books such as The Word of God for The People of God and Union With Christ. After being diagnosed with multiple myeloma in 2012, Billings and his wife decided to be open with others about his condition. But they didn’t know what they would learn through the process. The knowledge that he faces a “narrowed future” has raised fresh theological questions about life, death, and faith for Billings and taught him how to rejoice in the face of possible death. He has recorded his thoughts in a critically-acclaimed book, Rejoicing in Lament: Wrestling With Incurable Cancer and Life With Christ. Here we discuss what he has learned and hopes to teach others in the time he has left.

RNS: How did being diagnosed with multiple myeloma raise new theological questions for you?

TB: The suffering that cancer brings can seem senseless. In the course of my chemo, hospital time and treatment, I knew other cancer patients who were beaten down by their cancer to the point of death. Why would God allow cancer to crush their God-given body? Where is hope for the families, and for the patients themselves? [tweetable]The suffering of cancer raises raw questions about God, life, and death.[/tweetable] In this context, theological clichés are not enough. So, with new urgency, I dug deeply into Scripture: the Psalms, Job, the gospels, and Paul. How are we to respond to apparently senseless suffering? How can we affirm that God is King when children lose a parent to a mysterious disease? What does it mean to pray “thy Kingdom come” in a world that is a mess?

In exploring these questions, I found that an important part of my Christian vocabulary had been missing: lament.

RNS: How do you define lament and how is it related to praise?

TB: Biblical lament brings our grief and protest before the Lord in tenacious hope in God’s covenant promises. Nearly all Psalms of lament end in a declaration of trust and praise, after addressing God and bringing grief and protest to God.

Psalm 13 depicts this typical conclusion: “But I trust in your unfailing love; my heart rejoices in your salvation. I will sing the Lord’s praise, for he has been good to me.” Of course, it starts out with protest: “How long, Lord? Will you forget me forever? How long will you hide your face from me?” Yet even complaints like these are rooted in trust, hope, and ultimately praise. The Psalmist has his eyes on God’s promises. God has promised to remember his people – so why does it now seem like God is forgetting? God has promised to show his face to his people – so why does his face now seem hidden? Because the psalmists take God at his word, they lament and wrestle with God when his word does not seem to be coming to pass.

RNS: Speaking of the Psalms, you recall that John Calvin called them “an anatomy of all the parts of the soul.” What’s the best way to utilize the Psalms in times of lament?

TB: In a crisis, we experience more emotions than we can pinpoint at any given moment. In my own journey, I didn’t even realize the emotions that I was experiencing in the crisis before I slowed down and joined the Psalmist in prayer: anger, bitterness, confusion, protest – as well as joy, thanksgiving, and gratitude – they are all there in the Psalms. Through the poetry and prayer of the Psalms, we are encouraged not simply to “vent” before God, but to bring these emotions on a path, a path of coming before the face of our covenant Lord.

As worshipping communities, we need to rediscover the incredible gifts of the Psalms, for both corporate prayer and corporate singing, and for praying in small groups and as individuals. We often think that a bit of clever theology will make our grief disappear. I demur: the Psalms are much more raw and real and honest, and they bring our deepest emotions before the covenant Lord.

RNS: A skeptic might survey your situation and say that a good and powerful God would not allow diseases like yours to exist. How would you respond?

TB: For Christians, the problem of evil really stings; but that is better than the alternative. Skeptics, atheists, and agnostics are right to recognize the sting of suffering and evil – things are not the way they are supposed to be. They are right to reject reasons that we may give for why an almighty, good God would “allow” such suffering. We don’t know: as the book of Job indicates, it is beyond our human wisdom to know such things.

But Christians have an advantage over skeptics at this point: we do have reasons to keep protesting against evil and suffering. God’s creation is good, but our world is also not the way it’s supposed to be. God’s good creation has been corrupted by evil, and until Christ comes to set things right, we cry out in lament to God and move in compassion toward our neighbor; suffering and tears and evil are not God’s final intentions. For the skeptic, it can be very difficult to maintain that “sting” – for why not assume that evil and suffering is just the way things always have been, and always will be? But for the Christian, prayers of lament in the face of the problem of evil fuel compassionate action. Christians are called to respond to the sting of the world’s suffering with love, crying out “Come, Lord Jesus” in lament and hope.

RNS: You say Western culture often marginalizes the process of death and dying. How so?

TB: Dying and death have been institutionalized. Until the mid-twentieth century in the West, the vast majority of deaths occurred in homes. Now they occur in the hospital. Our children and young adults rarely interact with the dying. As Atul Gawande had eloquently shown in Being Mortal, our whole process of dying and death has been “medicalized” – turned into medical problems. But this actually contributes to the marginalization of death – rather than admitting that death is a problem medicine cannot solve. We often deny the reality of death through one desperate treatment after another, acting as if our deaths can be staved off if we try hard enough.

It is an incredible gift and opportunity of the church to be the one community in western culture where children gather with the old, where the newborn is celebrated on the same day that prayers are offered for a dying sister or brother in Christ. As a community, we need not deny the process of dying and death. Yet, as ones who belong to Christ, we testify that death does not have the final word. Unfortunately, the church sometimes suppresses this gift, seeking to be so “optimistic” that it forgets that God’s story doesn’t exclude but incorporates the story of our dying and death.

RNS: The Bible promises healing, but there is no known cure for your disease. How do you understand the Bible’s teaching on healing in light of your situation?

TB: In scripture, we are not promised a long life with a successful career, retirement, and a chance to see our grandchildren grow up. Instead, God promises that nothing will separate us from his covenant love, even suffering or death.

We should pray for healing, even in the face of what seem like impossible odds. But we should always accompany this with lament. Jesus wept for Lazarus, even though he knew that eventually he would receive healing. And we should weep as well, avoiding “quick fix” prayers that trivialize the losses. If God were to completely eliminate my cancer, I would rejoice. But I would still be on chemotherapy for the rest of my life, because the doctors expect the cancer to return – even if there are no detectable levels of it left. [tweetable]We should pray for people with incurable conditions.[/tweetable] But we should pray for them in a way that is similar to how we pray for someone who has lost a limb. God can, and eventually will, provide healing. But it may not look the way that we expect or want right now.