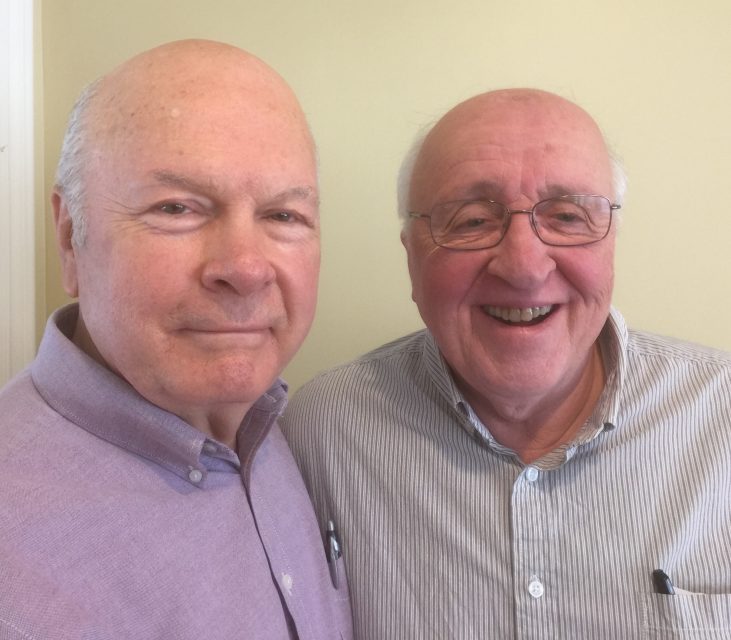 I’m in Pasadena this week for my first meeting with a small group of evangelical and Mormon scholars who’ve gathered for the last fifteen years or so for dialogue and friendship. I’m one of the newbies in the group, and it’s a great honor to be part of it.

The contents of our meetings are off the record*, but I wanted to share with you what happened yesterday in a related public event, when BYU professor Robert Millet was the guest speaker in one of Richard Mouw’s classes at Fuller Theological Seminary.

To give you some background, Rich Mouw retired recently as the president of Fuller (though he still seems as busy as ever), and Bob Millet is professor of religion and emeritus dean of religious education at BYU.

Most importantly, they are great friends.

So when Rich introduced Bob to the large class of seminarians, he did so with a bromantic side hug and stories of their deepening friendship through the years. And Bob responded with something like how Rich knows that Bob hates the hugging, but he’s willing to tolerate it because Rich is a Known Hugger.

Then Bob launched into a masterful lecture about the Mormon view of humanity’s role and eternal destiny. He was quoting scripture; he was pointing them to the Lectures on Faith; he was combing through Mormon history.

And this wasn’t the softball stuff, either, like “We believe in eternal families, and isn’t that sweet?”

No, this lecture was about the question that Mormons get asked about all the time but that we rarely talk about in our own prosaic and decidedly non-theological Sunday church meetings:

“Do you guys really think that you’re going to become gods? And that God was once a man?”

Already we should note several things that distinguish this kind of interfaith give-and-take from the defensive linebacker posture that Mormons have so often adopted when we expect to be tackled by angry evangelicals. Bob was totally comfortable, in his element. He was an invited, known, beloved guest who knew he would be treated with respect.

And he was more than ready to return the favor.

How did he do that? Well, in addition to imparting information about what Mormons believe, he also respected his audience. He was not there to convert them or even to convince them of his POV; he was there to increase their understanding of his faith and his understanding of theirs. He talked about his love for evangelical writers like C. S. Lewis and N. T. Wright, quoting their words and suggesting how much he had learned from them.

And he was willing to be vulnerable and admit it outright when he didn’t know something – a humility which, when we’re talking about the speculative frontiers of Mormon theology, is a pretty important quality. “I don’t know what to do with that” was what Bob said in all honesty about the first half of the uncanonized Lorenzo Snow couplet that “As man is; God once was.” Mormons don’t focus on that, and we’re not at all sure we believe it.

The second half, however – “As God is, man may become” – is still alive and well in Mormon belief, and Bob showed how the idea of theosis or deification has roots in orthodox (and Orthodox, big O) Christian theology, quoting heavyweight Church Fathers like Justin Martyr, Ireneaus, Athanasius, and Augustine.

Then he opened the floor for questions, which both he and Rich responded to, with help from some people in the audience. Some of the questions were tough. What about blacks and the priesthood/temple ban? Don’t Mormons basically pay lip service to grace, believing instead that we’ll get to the highest heaven on our own righteousness? Why do Mormons try to evangelize evangelicals?

And the spirit in the room was so friendly that when Rich mentioned one of his great concerns about Mormonism, I think the Mormons in the room were ready to take a hard look at our own tradition and realize the truth of what he was saying. Rich said he feels uncomfortable with the degree to which Mormons emphasize being with our families forever – not the overall concept, but the heavy weight we place on it. There’s almost nothing in the Bible on the family as an eternal unit; there is a privileging of singleness as the biblical ideal; and this focus “can detract from the sense of our presence before the face of Christ . . . We should not just be hoping for the kingdom; we’re hoping for the king.”

Amen to that. I have a lot to learn.