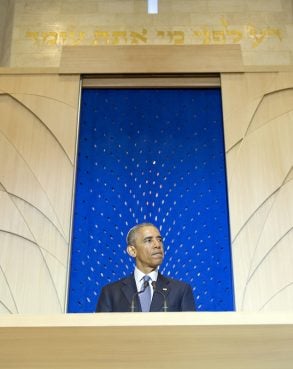 WASHINGTON (RNS) President Obama came to Washington’s most politically connected synagogue Friday (May 22)  with a dual mission — to celebrate Jewish American Heritage Month and to mark the first “Solidarity Sabbath,” a campaign against anti-Semitism.

But mostly his speech circled back to the testy issue of U.S.-Israel relations.

“No administration has done more to ensure that Israel can protect itself,” he assured a crowd of nearly 1,200 people, who responded with shrieks of approval.

The visit at Adas Israel, a congregation that draws members of Congress, diplomats, ambassadors and two Jewish Supreme Court Justices, was only the fourth from a sitting president at a Jewish synagogue. 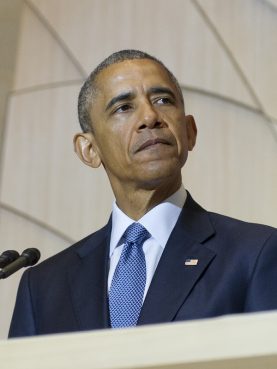 The president did not shy from mentioning  the U.S. push for an anti-nuclear agreement with Iran. Obama was emphatic, saying,  “Iran must not, under any circumstances, be allowed to obtain a nuclear weapon.”

He added: “I will not accept a bad deal. … This deal will have my name on it, so nobody has a bigger personal stake in making sure it delivers on its promise.”

The theme of shared values among Jews and Christians, who believe in God, justice, freedom and the rule of law, was threaded throughout the speech. To ignore these values would be to ignore the lessons of the ages, “that everybody has a place, everybody has rights, everybody is a child of God,” the president said.

In tying his remarks to Jewish American Heritage Month, Obama spoke of rabbis who marched for civil rights in Selma 50 years ago, and he noted the contributions of Jews, from Albert Einstein to Louis Brandeis.

“Our future will stand on the values we share,” he said, citing the anti-poverty themes he addressed a week ago at a symposium at Georgetown University.  “Our shared values compel us to redouble our effort to protect our plant and the human rights of all who share this planet.” 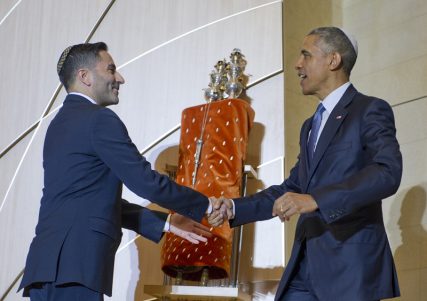 President Obama was greeted by Adas Israel Congregation Rabbi Gil Steinlauf when he addressed a Jewish audience there Friday (May 22).

But the president kept returning to the subject of Israel: “The people of Israel must always know America has its back. That does not mean there will not be or should not be periodic disagreements between our two governments.”

To those who say public disagreements on policy show lack of support for Israel, he said, “I must object.” To paper over settlement policy or the Israel Palestinian conflict is “not a true measure of friendship.”

Obama rejected the trend in some pro-Israel quarters to brand anyone who questions Israel’s settlement policy, anyone “expressing compassion or empathy towards Palestinian youth,” or anyone who publicly disagrees with the Israeli government as “anti-Israel” or “anti-Jewish.”

“I feel a responsibility to speak out honestly,” he added, while adding that “the Palestinians are not the easiest of partners.”

The president also spoke on the significance of Solidarity Sabbath, in which world leaders publicly express their opposition to anti-Semitism. Obama said the “disturbing rise” of anti-Semitism is “a threat to broader human values to which we all must aspire.  And when we allow anti-Semitism to take root, then our souls are destroyed….”

He concluded:”Jewish American life is a testimony to the capacity to make our values live.  But it requires courage.  It requires strength.  It requires that we speak the truth not just when it’s easy, but when it’s hard.”

Greg Rosenbaum, chairman of the JAHM celebrations, said before the speech, “Having the president speak from the pulpit about these issues will advance our agenda,” educating Americans about the contributions of Jews to U.S. history and culture.

“I think it will carry tremendous moral weight on the issue of rising anti-Semitism both at home and abroad,” Rosenbaum said.

Jewish American History Month was established by Congress in 2006. Events, including museum and online exhibitions at the Library of Congress and the National Park Service, can be found at a government-sponsored website highlighting 350 years of Jewish contributions to American history, culture and society. An interactive events calendar with listings from Florida to New York to California can be found at the Jewish American Heritage Month website.

The Lantos Foundation initiated the global “Solidarity Sabbath” as a response to the “resurgence of open, virulent, violent anti-Semitism, particularly in Europe,” said Katrina Lantos Swett, head of the foundation.

World leaders agreed to speak out as “a way to tell Jewish citizens — and all citizens: we stand shoulder to shoulder and that bigotry and racism and anti-Semitism will find no sanctuary within our country,”  added Lantos Swett.

The foundation is promoting #SolidaritySabbath and a pledge at its website where people can affirm “our shared commitment to the most fundamental of human rights: The freedom of religion, conscience, and belief.”