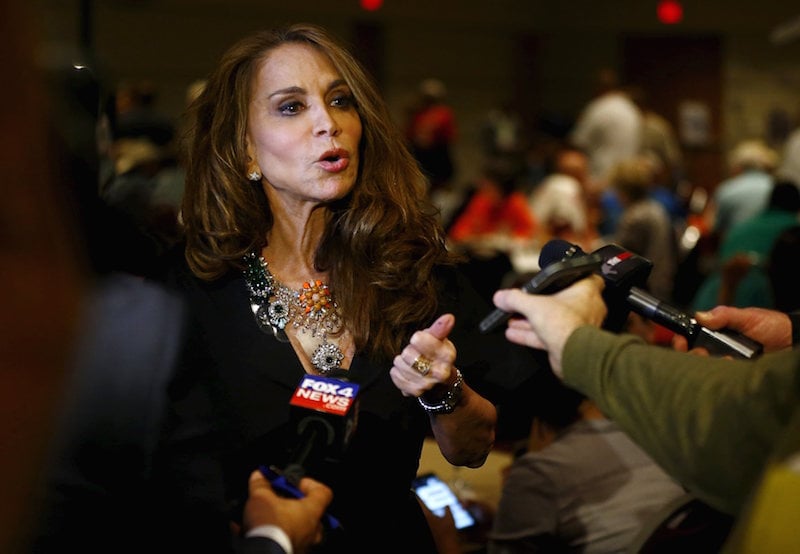 Political blogger Pamela Geller, American Freedom Defense Initiative's Houston-based founder, speaks at the Muhammad Art Exhibit and Contest, which is sponsored by the American Freedom Defense Initiative, in Garland, Texas May 3, 2015. Two gunmen opened fire on Sunday at the art exhibit in Garland, Texas, that was organized by an anti-Islamic group and featured caricatures of the Prophet Mohammad and were themselves shot dead at the scene by police officers, city officials and police said. REUTERS/Mike Stone
June 2, 2015
Brian Pellot

In the wee hours of June, SCOTUS has already ruled that Abercrombie must allow hijabs and that some violent threats online may be protected speech.

Before completely losing ourselves to what could be the Supreme Court’s busiest month in history, let’s recap what went down in May around the world. Political blogger Pamela Geller, American Freedom Defense Initiative's Houston-based founder, speaks at the Muhammad Art Exhibit and Contest, which is sponsored by the American Freedom Defense Initiative, in Garland, Texas May 3, 2015. Two gunmen opened fire on Sunday at the art exhibit in Garland, Texas, that was organized by an anti-Islamic group and featured caricatures of the Prophet Mohammad and were themselves shot dead at the scene by police officers, city officials and police said. REUTERS/Mike Stone

Two gunmen who opened fire at Pamela Geller’s Muhammad Art Exhibit in Texas were shot dead by police. The attack put me and other free speech advocates in the always uncomfortable position of supporting Geller --- not endorsing her Islamophobic politics, but defending her legal right to express those views in public.

Before the Texas shootings, we dug into similar debates about freedom of expression and religious freedom “post-Charlie Hebdo” at a Newseum event in D.C. Full video here.

NYC and D.C. transit systems banned all political and “issue-oriented” ads to justify not running one from Geller’s American Freedom Defense Initiative. That’s sort of like cutting off your arms and legs to avoid having to clip your nails: excessively effective.

A Nebraska woman sued ALL OF THE HOMOSEXUALS. A judge summarily dismissed the case.

In a more productive use of everyone’s time, Nebraska abolished the death penalty for financial, practical and religious reasons.  A group of interfaith activists are also lobbying to end solitary confinement, which they consider immoral and ineffective.

A Texas college banned support for marriage equality and “same-sex dating behaviors,” which presumably include any mundane activity involving any number of people of the same sex, because dating is not just long walks on the beach and magic carpet rides. Student athletes who engage in such activities, which might include same-sex dating tennis or same-sex dating football, could be kicked off their teams and lose their scholarships.

Organizers of a Christian prom in North Carolina thought they were just being transphobic and prude when they denied entry to a boy wearing a kilt until someone explained to them that a kilt is not a skirt, at which point they stood their Scotphobic(?) ground.

Adopted ‘Father’ and ‘Son’ to marry in Pennsylvania. Definitely read beyond the headline for this one…

Why should Christians have all the fun with religious freedom laws? Atheists are using the same rhetoric to remove “In God We Trust” from money. The First Church of Cannabis is using Indiana’s religious freedom law to justify toking up. And a Missouri Satanist is arguing that a forced 72-hour waiting period for abortions violates her religious freedom right to self autonomy. Let’s see how she reacts to the new federal bill banning abortions after 20 weeks.

A judge in California ruled that abstinence-only sex ed is illegal because it’s “medically inaccurate.” Also, it doesn’t work.

Several South American countries are facing criticism for their strict abortion bans. Lawmakers in Peru rejected a bill that would grant rape victims abortion rights, and Paraguay denied an abortion to a 10-year-old rape victim, putting the girl at serious risk. 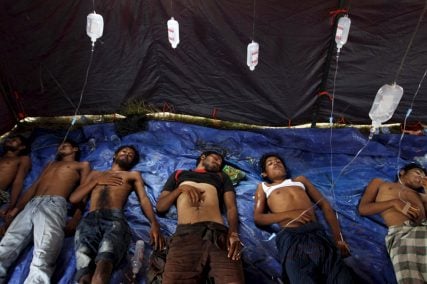 Myanmar continues to simultaneously ignore and persecute the Rohingya people, thousands of whom remain stranded at sea. Who are the Rohingya and why are they fleeing? I’m so glad you asked.

Disregarding the massive spotlight currently shining on Myanmar’s human rights violations, the government doubled down on its discriminatory tactics, enacting a new birth spacing law that very obviously targets Muslims and other minority communities. Rights groups are not happy.

Nobel laureate and opposition leader Aung San Suu Kyi could criticize these abusive policies, but the sad truth is that many voters endorse them, and she’s a politician with a major election on the horizon. If the Dalai Lama can’t even get her to say ‘Rohingya’ I sort of doubt she’ll listen to me.

In neighboring Bangladesh (where Myanmar says the Rohingya belong), a THIRD secular blogger was hacked to death in as many months. The Center for Inquiry is launching an emergency fund for freethought writers threatened by radical Islamists and has already brought Bangladeshi author Taslima Nasrin to the U.S. for her safety.

Religious minorities in India are concerned about the growing number of attacks targeting them, and not just from the Hindu majority. 13 Islamists were jailed for cutting off a Catholic professor’s hand over a “blasphemous” exam question he set back in 2010.

Marital rape is rape, unless you live in India, where “social customs and values and religious beliefs” are preventing it from being criminalized.

China, officially atheist, is no fan of religious freedom. The occasional symbolic gesture, like allowing Russian Orthodox priests to be ordained for the first time in 60 years, means little when the government goes around removing 400 crosses and ordering Muslim shopkeepers to sell alcohol. When USCIRF listed China as a baddie on its latest religious freedom report, China lodged a protest with the U.S. government to claim that its citizens have “ample” religious freedom. I rolled my eyes.

Justice may be coming to Pakistan, where more than 100 people were charged in the killing of a Christian couple who allegedly desecrated a Quran. 10 people accused of attacking Nobel laureate Malala Yousafzai also received prison sentences. 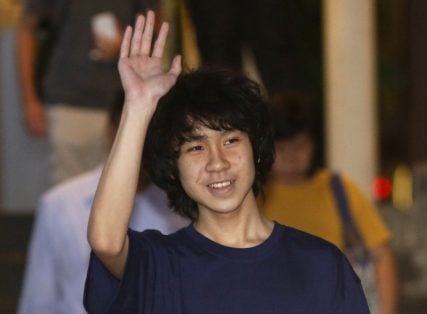 Amos Yee waves as he leaves the State Courts after his trial in Singapore May 12, 2015. A Singapore court on Tuesday found the teenager guilty of offending Christians and spreading obscene image in an online post that also carried comments celebrating the death of former prime minister Lee Kuan Yew. REUTERS/Edgar Su

Singapore convicted a teen blogger of obscenity and insulting religious feelings over a video he posted to YouTube, the latest example of of this city-state’s harshly imposed “harmony.”

Tajikistan forces Muslim men to shave their beards and labels women who wear hijabs “prostitutes.” Now it’s banning names that are “incorrect or alien to the local culture,” meaning names that sound “too Arabic.”

Atheists in Egypt have launched a YouTube channel and are collecting signatures to form a new secular party, but don’t let that fool you into thinking freethinkers have it easy. A TV presenter was sentenced to 5 years in prison for “deliberately aiming to make people question their beliefs,” which sounds to me like good journalism. A group of young teens are being tried for “insulting Islam” in a video mocking ISIS.

This Syrian comedy troupe is mocking ISIS to counter the group’s propaganda and win back friends who’ve joined its ranks.

As temperatures rise in Iran, some women like to loosen their hijabs, which can lead to arrest. Similarly dangerous are spiky haircuts and male eyebrow plucking, which are obvious signs that you’re either a devil worshipper or a homosexual, by some illogical logic.

Qatar has tried to soften its harsh (and inadvertently sassy?) Reflect Respect campaign, which basically banned exposed skin below the neck and proclaimed “leggings are not pants” (insert judgmental emoji).

Women in Saudi still can’t drive, except for in a new video game, where they race motorcycles in flowing abayas and with their vision partially obscured by burqas, which looks awfully dangerous:

Israel suspended its segregated bus program,  which would have barred Palestinians from using the country's public transport lines. On a scale of “separate but equal” to apartheid, this one was off the charts.

Not even all Jews feel welcome in Israel, as black Ethiopian Jews continue to protest against what they consider institutional racism.

Yes, it’s June, which means long summer days in the northern hemisphere, but spare a thought for us down South:

Less positive news from Gambia, where the president threatened to slit gay men’s throats in a public speech. Kenya’s deputy president said there’s "no room" for gays in Kenya. Given that Kenya is smack dab in the middle of global population density charts, I think they could squeeze a few million in no problem.

In Northern Ireland, paying for sex became a criminal offense as part of the new Human Trafficking and Exploitation Act. The law’s name says it all, leaving little room for consensual, voluntary sex work above the border.

American Christians bankrolled a campaign to oppose gay marriage in Ireland, which failed when nearly two-thirds of voters chose marriage equality. The Vatican called it a “defeat for humanity.” Humanity called it a defeat for the Vatican.

I visited Kosovo last week, where I moderated a panel on using social media to counter violent extremism. You can read some of my thoughts on the matter here. I also stopped by Sarajevo, where you can’t go two steps without seeing a poster advertising the Pope’s visit this week.

Norway scrapped its blasphemy law, citing Charlie Hebdo as an inspiration and offering a slight silver lining to the Paris tragedy earlier this year.

This is where I leave you. If you’re hankering for more, check out last week’s New Statesman on free speech and blasphemy, which reportedly got a new cover when cartoonist Art Spiegelman pulled his, protesting the magazine’s decision not to run his cartoon of the prophet Muhammad.

Right. Back to SCOTUSblog.

Related Posts
By Eboo Patel
From King to Gandhi, racial justice means all faiths matter
By Jeffrey Salkin
I stand with Bari Weiss
By William Kole
Campaign brewing to get Hindu god Brahma off popular beer
By Jack Jenkins
Biden campaign hires new Jewish outreach director
By Shumaila Hemani
As a Sufi singer, I believe the sounds of world religions can cultivate compassion during COVID-19