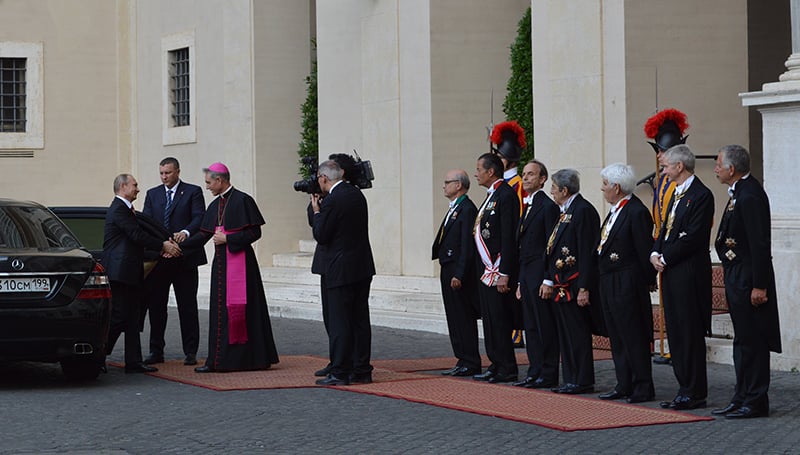 Russian President Vladimir Putin is greeted by Archbishop Georg Ganswein, head of the papal household, upon arriving at the Vatican on Wednesday (June 10, 2015) for a meeting with Pope Francis. Religion News Service photo by Rosie Scammell

VATICAN CITY (RNS) A serious-looking Pope Francis on Wednesday (June 10) spoke with Russia’s president, Vladimir Putin, in a meeting focused on conflicts in Ukraine and the Middle East that pose complex and contrasting diplomatic challenges for the two leaders.

Francis spent 50 minutes in a private meeting with Putin, to which the Russian leader arrived more than an hour late.

A serious atmosphere reportedly hung over the start of the Vatican visit, with the pope lacking his usual jovial persona.

Putin was greeted by Archbishop Georg Ganswein, head of the papal household, and a line of dignitaries before being ushered inside to see Francis.

During the meeting, the pope affirmed the need to work sincerely toward peace in Ukraine and emphasized the importance of rebuilding a climate of dialogue, Vatican spokesman Federico Lombardi told journalists.

The pope also talked about the grave humanitarian situation in the country and the need to give access to relief workers, Lombardi said.

The Vatican did not say whether Francis challenged Russia on its role in the Ukraine conflict, as the U.S. government had urged him to do.

Speaking ahead of the papal visit, the U.S. ambassador to the Holy See, Kenneth F. Hackett, urged the pope to address “territorial integrity” during the private meeting.

“It does seem that Russia is supporting the insurgents, and it does seem that there are Russian troops inside Ukraine,” Hackett told journalists. “This is a very serious situation.”

In the traditional exchange of gifts, Putin gave the pope a piece of embroidery representing Moscow’s Cathedral of Christ the Savior, which was destroyed by Joseph Stalin and later reconstructed.

Pope Francis gave Putin the “Angel of Peace” medal, which the pope said has the ability to create solidarity between populations.

The two reportedly discussed Syria and Iraq,  too.

Putin has positioned himself as a champion of beleaguered Christian minorities in war-ravaged countries such as Syria and Iraq, and protecting those communities is also a priority for Francis.