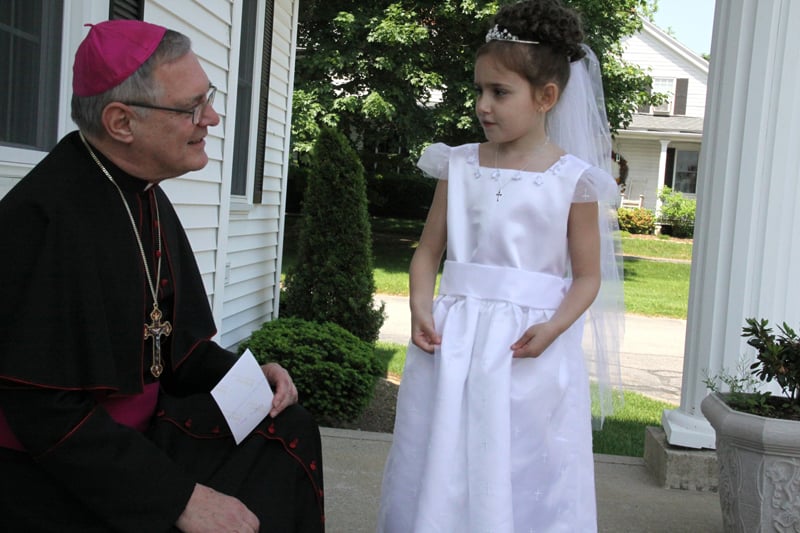 (RNS) So are you by chance a hairy, manspreading slob? Or a woman who dresses way too young for her actual age? Or one of those “hyperactive gum-chewing kids with messy hair and dirty hands, checking their iPhones and annoying everyone within earshot or eyesight”?

Then you may want to reconsider your summertime churchgoing shtick.

Or at least check to see who is celebrating Mass if you are heading to a parish in the Roman Catholic Diocese of Providence.

In an instantly quotable column published last week, Bishop Thomas Tobin of Rhode Island took on one of the clergy’s long-standing laments and launched an impressive broadside against “the sloppy and even offensive way people dress while attending Mass” in the summertime.

It’s a memorable rhetorical outburst, even for the outspoken Tobin, and it’s one that may alternately irk, or shame, Mass-goers -- as well as finding more than a few pastors nodding in agreement.

“You know what I’m talking about; you’ve seen it too,” Tobin wrote.

Warming to his task, he then went on a tear:

“Hirsute flabmeisters spreading out in the pew, wearing wrinkled, very-short shorts and garish, unbuttoned shirts; mature women with skimpy clothes that reveal way too much, slogging up the aisle accompanied by the flap-flap-flap of their flip-flops; hyperactive gum-chewing kids with messy hair and dirty hands, checking their iPhones and annoying everyone within earshot or eyesight.

“C’mon -- even in the summer, a church is a church, not a beach or a pool deck,” the bishop wrote.

Freely admitting to a bit of venting, Tobin went on to wonder about all the people he has seen “coming to Mass carrying their water bottles and coffee mugs? Do they really need to be hydrated or caffeinated during that hour they’re in church? Is it a sacred space or an airport terminal?”

The bishop’s verbal facepalm continued with a disquisition on what he said was the widespread ignorance of how to properly receive Communion, including a primer on doing so reverently.

Tobin does enjoy a reputation as a conservative hard-liner in the hierarchy -- he has said he is “a little disappointed” in Pope Francis for not speaking out more against abortion -- and his latest column was cheered by bloggers on the right, such as the Rev. John Zuhlsdorf.

Yet Tobin admitted that he doesn’t have strong views on the usual third-rail liturgical arguments, such as whether to receive Communion in the hand or on the tongue, or kneeling or standing.

But Tobin does want a good deal more decorum from the faithful when they come to Mass this summer.

Whether that will cause any of them to become a bit self-conscious and cover up, or whether they will simply ignore Tobin and continue on as always, it’s likely that more than a few priests are saying “amen” -- albeit under their breath.

Related Posts
By Claire Giangravé
Vatican’s China deal may protect Chinese Catholics, keep Pope Francis silent
By Menachem Wecker
How the Black Plague turned the Shroud of Turin into a beloved relic
By Amy Klein
What good is faith when your fertility treatments aren't working?
By Claire Giangravé
Seven years later, still no trace of Jesuit priest kidnapped in Syria
By Ricardo da Silva
Without church or internet, many South Africans turn to liturgies at home