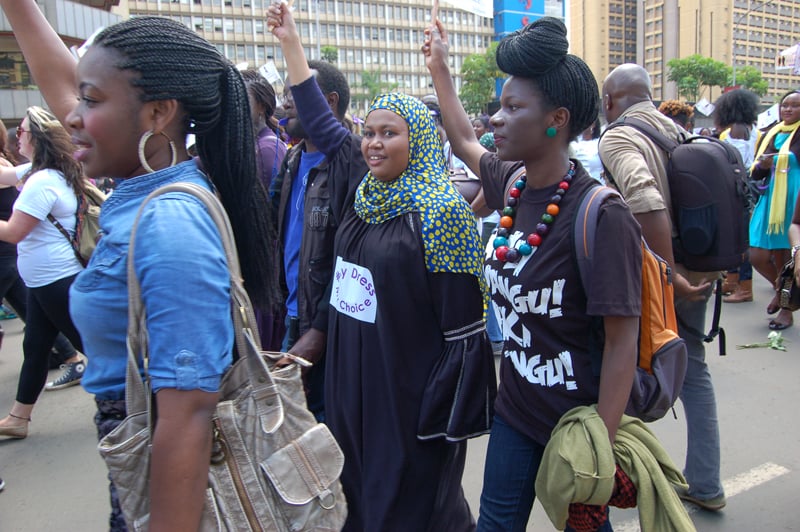 Young Muslim women take part in a demonstration about the choice of dress in Nairobi, in March 2015. Religion News Service photo by Fredrick Nzwili

NAIROBI, Kenya (RNS) As the Islamic world experiences a rise in the number of women wearing the burqa, a traditional Islamic outer garment for covering the body in public, the dress code is being banned in some African countries over possible connections with terror attacks.

On Wednesday (June 17), Chad, a majority-Muslim nation in Central Africa, become the second country on the continent to ban women from wearing the full-face veil.

The government said the ban applies to all public places and ordered security forces to burn all veils being sold in the markets.

The decision affects the 53 percent of the population who are Muslims. Christians make up about 34 percent in the former French colony. France banned face veils in public in 2010. The European Court of Human Rights upheld the ban last year.

In Chad, the ban was prompted by twin suicide bomb attacks in the capital, N’Djamena, on Monday in which more than 20 people were killed.

Chad has blamed the attacks on northern Nigeria Islamic extremist group Boko Haram, which has recently turned to women suicide bombers to carry out attacks.

Prime Minister Kalzeube’ Payimi Deubet announced the ban at a meeting with religious leaders from the Roman Catholic and evangelical churches and Muslim leaders.

Wearing the burqa “is now strictly forbidden in the entire country,” Deubet told the leaders.

The ban has incensed some Muslim leaders and scholars, who fear a ban may only add to extremist violence.

“I would rather see dialogue on the issue,” said Sheikh Hamid Byamugenzi, the deputy director of Islamic University in Kampala, Uganda.