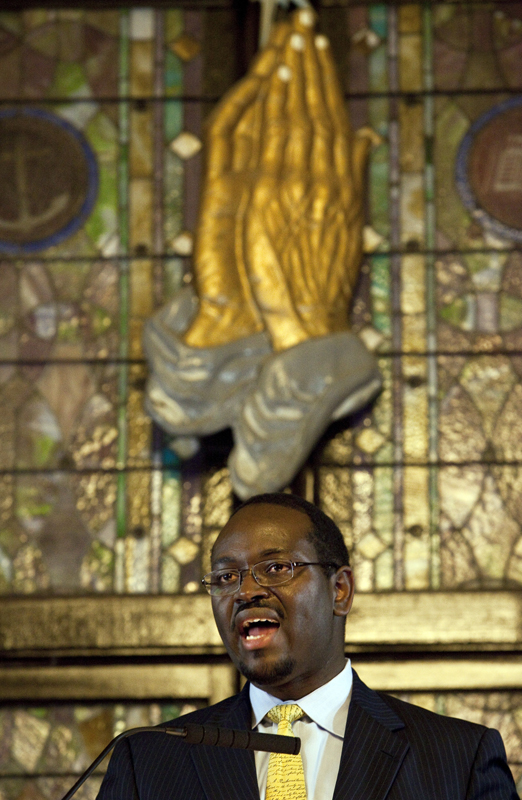 Senior Pastor, Rev. Clementa Pinckney, speaks to those gathered during the Watch Night service at Emanuel African Methodist Episcopal Church in Charleston, South Carolina on December 31, 2012. Photo courtesy of REUTERS/Randall Hill
*Editors: This photo may only be republished with RNS-SLAIN-PASTOR, origianlly transmitted on June 18, 2015.

“He was a giant, a legend, a moral compass.”

Those are the words used by fellow state senator Marlon Kimpson on CNN Thursday morning to describe the Rev. Clementa Pinckney, the pastor and politician who was among nine people killed when a gunman, believed to be white, opened fire Wednesday evening at the historic Emanuel African Methodist Episcopal Church in Charleston, S.C.

Pinckney’s sister also died in the shooting, said J. Todd Rutherford, the minority leader of the state’s House of Representatives. Her name is not known and the other victims, two men and five women, were not immediately identified.

Rutherford, who has served in the State Legislature with Pinckney since 1998, told the New York Times that his colleague was “a man driven by public service” whose booming voice inspired his congregation and constituents.

Pinckney, 41, was married with two children and had served in the state Senate since 2000, according to an online biography on the church’s website.

According to Rutherford and the website, Pinckney started preaching at 13 and received his first appointment to be a pastor at 18. At 23, he was elected to the South Carolina House of Representativesthe youngest state legislator in South Carolina history, and in 2000 was elected to the State Senate. Washington Post columnist David Broder called Pinckney a “political spirit lifter for surprisingly not becoming cynical about politics,” the site said.

A black mourning cloth was draped over Pinckney’s seat in the senate chamber in the capital, Columbia, Wednesday, according to news reports.

In 1999, Ebony Magazine named Pinckney as one of 30 African-American leaders of the future. He and his wife, Jennifer, have two children, Eliana and Malana.

State Rep. Wendell Gilliard told the Charleston Post and Courier that he visited Pinckney’s wife and daughters after the shooting. saying that the family is “surrounded by friends.”

In April, Pinckney helped lead a prayer vigil for Walter Scott, a black South Carolina man who was shot dead by a police officer as he tried to run away.

The veteran civil rights campaigner Al Sharpton, who was also involved in the vigil, tweeted on Wednesday night: “Rev. Clements Pinckney, a SC legislator is among the 9 killed in SC church. I am reminded that he helped lead our prayer vigil for Scott.”

The congregation was formed by black members of Charleston’s Methodist Episcopal Church who broke away “over disputed burial ground,” according to the park service’s website.

In 1822, one of the church’s co-founders, Denmark Vesey, tried to start a slave rebellion in Charleston, the website added. The plot was discovered and 35 people were executed, including Vesey.

The Rev. Joseph Darby of the AME Church in Beaufort, S.C., described Pinckney as “an advocate for the people.” He told MSNBC that “he was a very caring and competent pastor, and he was a very brave man. Brave men sometimes die difficult deaths.”