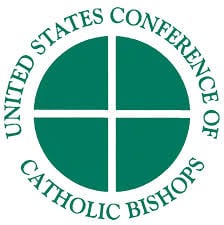 Logo of the USCCB

WASHINGTON, D.C. It would be nice to report that Cardinal Donald Wuerl, Archbishop of Washington, and Archbishop Joseph Kurtz of Louisville, president of the United States Conference of Catholic Bishops, took the clarion call that Pope Francis sounded today and amplified it for the American church and nation. But that’s not what they did at a packed press conference at the National Press Club this morning. Instead, they toned it down.

Where Francis denounced “an efficiency-driven paradigm of technocracy,” Wuerl talked about his gentle “invitation to everyone to join him in conversation.” Where Francis demanded a a swift reduction in carbon emissions, Wuerl talked about the beginning of a long process of absorbing what he had to say. “He is not saying to individuals, you must do this,” said the cardinal. “That doesn’t appear in the document. He is saying, here is the moral frame of reference.”

Take a look for yourself. Laudato Si’ does a lot more than set a moral frame of reference, and its invitation to conversation is not that of a mild-mannered convener. Francis has just looked the world’s economic powers and principalities in the eye and read them the riot act.

Politics must not be subject to the economy, nor should the economy be subject to the dictates of an efficiency-driven paradigm of technocracy. Today, in view of the common good, there is urgent need for politics and economics to enter into a frank dialogue in the service of life, especially human life. Saving banks at any cost, making the public pay the price, foregoing a firm commitment to reviewing and reforming the entire system, only reaffirms the absolute power of a financial system, a power which has no future and will only give rise to new crises after a slow, costly and only apparent recovery.

Of course the cardinal and the archbishop know perfectly well what’s in the encyclical, and at times Kurtz even signaled as much. Yes, His Holiness has issued an invitation to dialogue, he said, but it was “not a weak invitation.” The encyclical “really brings about a new urgency for us.”

However, he and Wuerl know that they have brethren in the hierarchy and children in the pews who will strongly resist what the pope had to say. Kurtz serves in a state where there will be no lack of resistance to this papal sententia: “We know that technology based on the use of highly polluting fossil fuels – especially coal, but also oil and, to a lesser degree, gas – needs to be progressively replaced without delay.” Hear that, coal country? And Wuerl has a constituency that includes many Catholic power brokers and intellectuals who worship at the shrine of the Market.

But I’m not sure whether the best way to get reluctant American Catholics onto the good ship Laudato Si’ is to ease them gently up the gangplank. Pope Francis himself prefers the frog march. “Obstructionist attitudes, even on the part of believers, can range from denial of the problem to indifference, nonchalant resignation or blind confidence in technical solutions,” he writes. “We require a new and universal solidarity.”