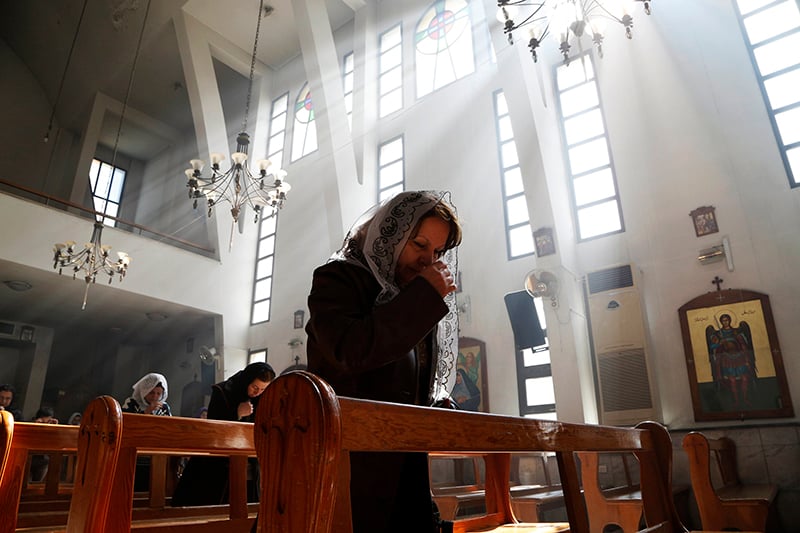 An Assyrian woman attends a Mass on March 1, 2015, inside Ibrahim al-Khalil church in Jaramana, eastern Damascus, in solidarity with the Assyrians abducted by Islamic State fighters in Syria. Photo courtesy of REUTERS/Omar Sanadiki
*Editors: This photo may only be republished with RNS-SEIPLE-COLUMN, originally transmitted on July 7, 2015.

(RNS) A well-intentioned argument is developing among some Westerners, urging the evacuation of Christians from the Middle East. These Westerners reason that because no one will defend the Middle Eastern Christians, they should be resettled elsewhere.

Such an approach is naive at best, and complicit at worst, accomplishing the religious cleansing desired by ISIS. Here are five reasons why Christians should not be removed from the birthplace of their faith:

1. Evacuation would be based on bad logic.

Western countries do not want Syrian and Iraqi refugees. As Hans Rosling explains: “Today the European Union does everything it can to stop more than 99 percent of the Syrian refugees to apply for the asylum that they are legally entitled to in EU countries.” Meanwhile, to date, the U.S. has taken in fewer than 900 Syrian refugees in four years.

Engaging the U.S. Congress and European parliaments to strike emigration deals and accept Christian-only refugees would require an enormous amount of time and money. Such an effort would ask these countries to discriminate against non-Christians — Muslims are the overwhelming majority of ISIS refugees — violating most international covenants and domestic laws.

2. Removal would be bad business.

Let’s assume the resources are there to evacuate Christians to Western countries. These resources could attract the wrong people, who would not otherwise come. For example, during Sudan’s civil war, well-intentioned Christians bought slaves their freedom, inadvertently creating a market for more slaves and making the situation worse. And if evacuating Christians from their homes is the best option, why don’t Christians from northern Nigeria and North Korea get the same chance?

3. It would be bad geopolitics.

Voltaire once said: “If you have two religions in your land, the two will cut each other’s throats; but if you have 30 religions, they will dwell in peace.”

Indeed, as Brian Grim demonstrates, the more religious freedom there is, the more political stability, the more economic development and the more women’s empowerment. In other words, the more people on the island — despite the messiness of varying perspectives — the better.

In 1636, Roger Williams was forced to leave Massachusetts. So he went and founded Rhode Island — a place where Jew, Quaker, Indian and Protestant lived in peace. In Massachusetts, the Puritans hanged Quakers and put witches on trial because they deviated from the majority culture. There were no hangings or witch trials in Rhode Island; everyone was welcomed to stay, as long as there was mutual respect.

Removing Christians from the Middle East accelerates instability. It takes out the educated class of public servants and teachers so essential to a functioning society. It removes the buffer between Kurd and Arab, Sunni and Shiite. It provides propaganda for ISIS against those Christians who remain. It aids and abets ISIS, finishing its religious cleansing. And it leaves the Christian-majority West without a bridge of understanding to the Middle East.

4. Leaving would be bad theology.

In his acclaimed book, “The Rise of Christianity: How the Obscure, Marginal Jesus Movement Became the Dominant Religious Force in the Western World in a Few Centuries,” Rodney Stark demonstrates that when crises came to the cities of the Mediterranean world, the Christians stayed. In contrast to the non-Christians who fled the crisis, the Christians loved, suffered and died with their neighbors amid war, famine and disease. The faith grew because it did not go.

I have been to northern Iraq, Lebanon and Jordan four times in the last eight months, traveling throughout these countries, meeting every kind of Christian, in every condition. I have cried with them, listening to their yearning to return — to worship again in their village church and to tend to their fields. The overwhelming majority want desperately to stay and to return to their homes.

It would be nice to consider emigration as a realistic option. But it is not. I would suggest pundits spend that same time and money fighting for a clear and concrete objective, declaring and defending a safe haven on the Nineveh Plain for Christians, Muslims and Yazidis.

Yes, there are some high-risk situations that demand emigration. But, in general, Western Christians should think hard about how not to be an accomplice to ISIS. Instead, they should be seeking new ways to shrewdly and innocently empower Christians to remain and flourish in the cradle of Christianity.

(Chris Seiple is a former Marine infantry officer with a doctorate in international relations. He is president of the Institute for Global Engagement.)