NEW DELHI (RNS) Anti-gay violence has reportedly tripled in India since a 2013 Indian Supreme Court ruling criminalizing same-sex relations, thrusting the once-taboo topic into the center of public and religious discourse.  But just how accepting Hinduism is of homosexuality remains a matter of continuing debate.

Despite these numbers, Tarun Vijay, a Hindu member of Parliament for India’s ruling conservative party, said India’s Hindu majority makes it “the most tolerant country in the world.”

“When Indian organizations talk about persecution, they are saying it to a Western audience, to people in London or New York, because they want donations,” he said.

But blogger and activist Harish Iyer disputes the notion that India’s gays and lesbians face no persecution. “India’s queer citizens are assaulted, beat up and blackmailed all the time,” he said. “Especially since the Supreme Court’s ruling.”

Though Iyer has not been arrested, he says family members have rejected him out of a belief that homosexuality goes against the Hindu faith and Indian tradition. “Which is ridiculous! I’m gay and a Hindu and there’s nothing wrong with that,” he said.

Theologians and historians often disagree on whether homosexuality is compatible with Hinduism. Some say Hinduism is more vague and therefore tolerant of homosexuality than Christianity or Islam, both of which include scripture passages that have been used to justify condemnation of same-sex relations.

“Sexual expression prior to the 19th century was much more free and open. There weren’t any labels like today,” said Manu Bhagavan, a professor of history at Hunter College in New York. “This is manifested in temple carvings and other forms of religious carving, and would be broadly true of trends throughout society, so it wasn’t something that was peculiar or limited.”

Bhagavan attributes India’s sexually conservative policies to British colonialism. “To say that Hinduism as a religion is theologically anti-gay would be very difficult to prove,” he said.

Not all Hindus reach the same conclusion. 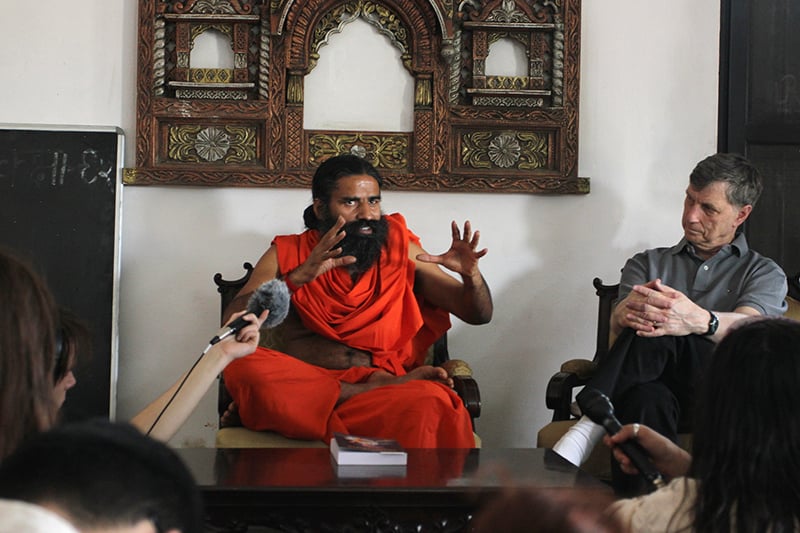 Baba Ramdev, a yoga guru and one of Prime Minister Narendra Modi’s strongest supporters, speaks to journalists in Haridwar, India. Ramdev holds the conservative view that homosexuality is not compatible with Hinduism, and in the past he has called it a mental disorder. Religion News Service photo by Arielle Dreher

Baba Ramdev is a nationally known yoga guru in India with close ties to the ruling conservative party and Prime Minister Narendra Modi. Ramdev considers himself a defender of conservative Hinduism.

“Homosexuality is not natural,” he said bluntly when asked about the issue. That’s not to say that Hinduism condones discrimination, but that same-sex relations go against the Vedas of Hindu scripture, he added.

Some Hindus highlight one passage in the Vedas — “Vikruti Evam Prakriti,” which roughly translates to “What seems unnatural, is natural” — as evidence that Hinduism tolerates homosexuality, but Ramdev dismissed this interpretation.

Devdutt Pattanaik is an Indian author of Hindu mythology and considers himself a proud Hindu as well as a proud supporter of gay rights in India.

“Pre-modern Hindu society wasn’t a paradise for homosexuals,” Pattanaik said. “The Manusmriti, one of the oldest collected texts of Hindu laws, says that men who engaged in sexual activity with other men faced a light penalty, such as taking a ritual bath for purification.”

He points out that the Manusmriti punished heterosexual transgressions more harshly, prescribing the death penalty for Hindu men who were married and committed adultery. For this reason he doesn’t think critics of homosexuality can root their opposition to gay rights in Hinduism.

“Hindu temples often depict gods with multiple wives yet these very same men will say, ‘Hinduism does not support polygamy,’” he said. “Go figure out this paradox!”

Some of India’s most conservative Hindu organizations refuse to weigh in on the debate.

Pradeep Jain is the state coordinator in Gujarat for the Rashtriya Swayamsevak Sangh, a right-wing Hindu nationalist charity whose members form the conservative core of India’s ruling party. Jain said there is no uniform view on homosexuality.

“We have many supporters, especially younger members, who oppose the law, but there are many who are against homosexuality,” he said. “Because of my position, I choose to remain silent on the issue, because so many look to me for leadership.”

Even in Rishikesh, a small city in northern India on the banks of the Ganges, one of Hinduism’s most sacred sites, there is no clear consensus. 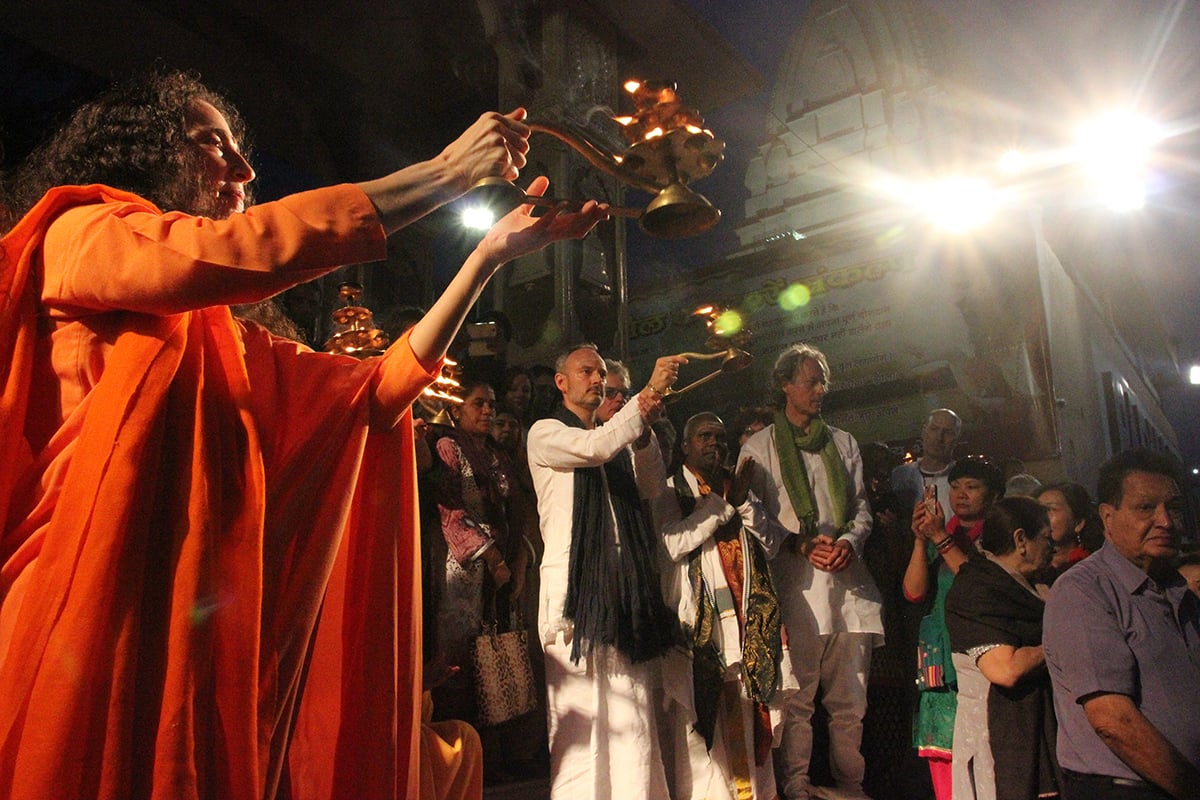 Sadhvi Bhagawati leads a daily Arti ceremony on the banks of the Ganges. Before the ceremony she gave a speech on the oneness of humanity and the importance of tolerance. A Jewish-American convert to Hinduism, she admits she has difficulties reconciling her progressive personal views on homosexuality with those of her faith. Religion News Service photo by Arielle Dreher

There, Sadhvi Bhagwati performs a daily Hindu ritual in which she offers the light from wicks soaked in ghee (clarified butter) to various deities and speaks to throngs of religious pilgrims about the oneness of humanity and the need for tolerance.

Bhagwati, an American of Jewish ancestry, moved to India in 1996 to become an apprentice to Chidananda Saraswati, one of India’s leading Hindu spiritual voices. As a convert to Hinduism, she sometimes feels conflicted when trying to reconcile her progressive outlook on homosexuality with her faith.

“The way I’ve accepted it is that, if an older couple — too old to have children — came to me and said that they had sex 30 or 40 times a day and they loved it, I would tell them that is wrong,” she said, explaining her belief that having sex to satisfy one’s own desire is selfish and against Hinduism. She applies the same logic to homosexuality.