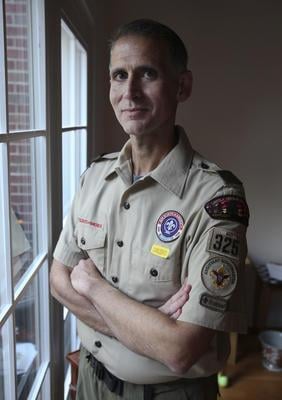 Greg Bourke before he was forced to resign from Boy Scout leadership in 2012. Photo courtesy Sam Upshaw Jr., The Courier-Journal

But Greg Bourke, who helped win the right of gays and lesbians to marry, said he learned Tuesday (Aug. 4) that he still can’t be a Boy Scout leader in a local Catholic parish troop.

The Boy Scouts of America’s new policy allowing openly gay leaders also allows church-sponsored units — including those in Catholic and Mormon churches — to choose local unit leaders who share their beliefs, even if that means restricting such positions to heterosexual men.

And Bourke, who was by all accounts a revered leader in Boy Scout Troop 325 until he was forced to resign in 2012 when he announced his sexual orientation, said in a Facebook post Tuesday that his pastor told him his application to be a troop leader again had been rejected.

“My heart is broken that my church would now present the barrier to my returning to my Boy Scout unit,” Bourke said.

The Rev. Scott Wimsatt, pastor at Our Lady of Lourdes Catholic Church, could not be reached for comment, and Cecilia Price, a spokeswoman for the archdiocese, said in an email that “we do not discuss with the media the pastoral situation of individual parishioners.”

However, she said the archdiocese sent a statement to pastors last week saying “we have both the right and the responsibility to choose leaders whose character and conduct are consistent with church teaching.”

The statement also said “all pastoral leaders in these ministries should be able to provide a credible and integrated witness in their lives to the teachings of the Catholic Church, including its teachings on marriage, sexuality, and charity.”

READ: Is it pretty outside? Then you’re less likely to go to church

When Bourke was removed from scout leadership three years ago, Price said in another statement that adult leaders — “whether heterosexual or with same-sex attraction” — in any ministry must “strive to lead chaste lives and seek to both accept and witness to the full teachings of the Church on chastity and charity, including teachings on the sanctity of marriage.”

The National Catholic Committee on Scouting said last week that the Boy Scouts resolution appears to “respect the needs of Catholic-chartered organizations … to choose leaders whose character and conduct are consistent with those of Catholic teaching.”

However, in a statement, its leaders expressed concern that the resolution “articulates a position on adult sexual conduct that does not make clear that sexual behavior should be reserved to a husband and a wife in marriage.”

Bourke and his partner, Michael De Leon, were among the petitioners who won the historic June 26 ruling in which the Supreme Court said states must allow gays and lesbians to marry and that states much recognize those marriages.

(Andrew Wolfson writes for the CourierJournal of Louisville, Ky.)