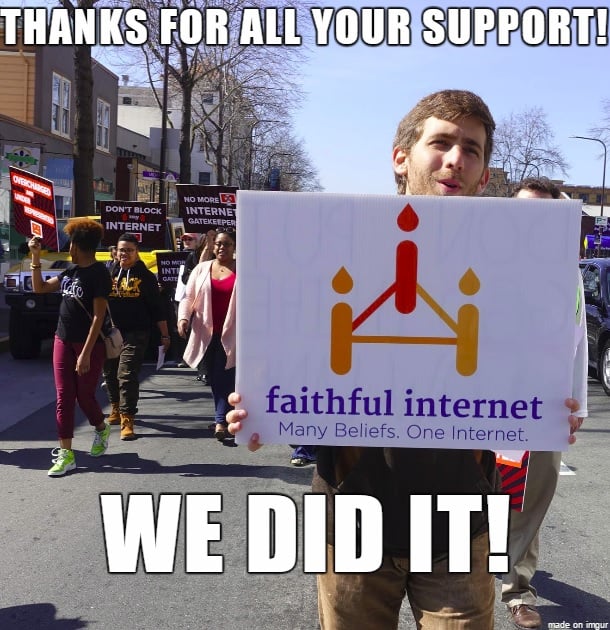 (RNS) “If you want a world where #BlackLivesMatter … if you want dignity for #Sikhs and #Muslims and the #99Percent, then #NetNeutrality is your cause too.”

So says Valarie Kaur, an American Sikh lawyer and filmmaker who thinks these popular hashtags are more than just clickbait:

They represent the most pressing social justice issues of our time.

Interfaith leaders have long rallied for racial and economic justice and railed against police brutality. Now, with her Faithful Internet campaign, Kaur is calling on America’s religious communities to fight just as hard for net neutrality.

“None of our social justice work would be possible without ‘net neutrality’ — the principle that keeps the Internet an open and free space for all of us,” said Kaur, media and justice fellow at the Stanford Center for Internet and Society.

Kaur watched that principle come under threat last year when the Federal Communications Commission considered a proposal that would have allowed Internet service providers to speed up access to those websites willing or able to pay a premium while slowing down the rest. 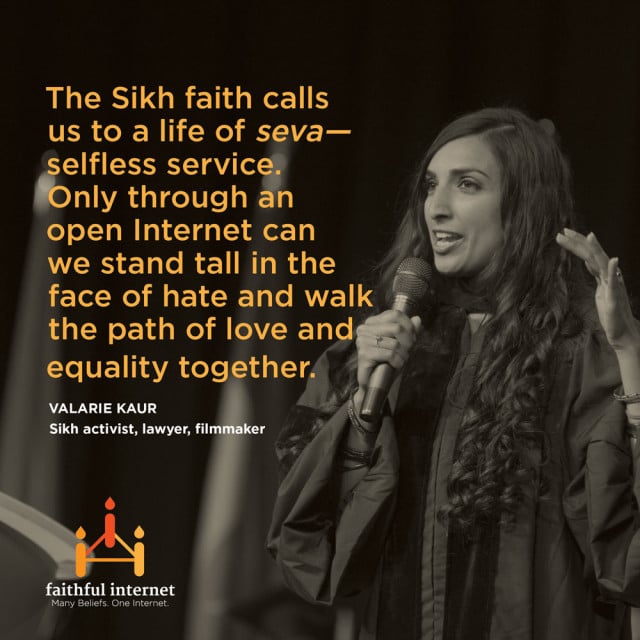 Valarie Kaur, an American Sikh lawyer and filmmaker at the Stanford Center for Internet and Society. Photo courtesy of Valarie Kaur

Millions of Americans filed public comments against the proposal, and in February 2015 the FCC adopted “Open Internet” rules to protect net neutrality. Those came into effect on June 12.

As corporate critics now appeal to Congress and courts to kill the new rules, Kaur’s campaign continues to attract supporters from across America’s diverse faith and belief spectrum.

“With the spread of the open Internet, people are growing up virtually in an area of extraordinary diversity, and it’s making them better-informed, caring and compassionate citizens of the world,” he said. “It would be the greatest tragedy if we allowed the greatest tool in the history of human knowledge to be handed over to some sort of elite.”

Faithful Internet co-founder Cheryl Leanza, who serves as policy adviser to the United Church of Christ’s Media Justice Ministry, said net neutrality is just as important for everyday worship as it is for interfaith activism. Last year the UCC launched Extravagance, an online community designed to engage UCC members who live far from brick-and-mortar churches.

“For a community that would like to worship together online in real time, equal and fair access to high-speed Internet connections is essential. The last thing we want to see is the ‘spinning wheel of death,’” Leanza said, referring to the icon that appears on Apple computers when applications become unresponsive.

READ: Arian Foster: Can you be an atheist in the NFL? (COMMENTARY)

Without net neutrality, Leanza and others fear that faith groups’ online sermons and calls for vigils, marches and protests will take longer to load while the latest seasons of “Orange Is the New Black” and “House of Cards” pop up at record speeds in adjacent browser tabs.

They also worry that meaningful encounters among people of different faiths will diminish.

“We need conversations in cyberspace that dismantle our silos,” said the Rev. Jacqueline Lewis, senior minister of Middle Collegiate Church in New York City. “I converse with a young Muslim lawyer who lives in Pakistan. Seeing the world through his eyes changes my point of view.”

Speaking on the Faithful Internet webinar launch last November, Kaur recalled how important a free and open Internet was to her faith community and interfaith allies in 2012 when a gunman fatally shot six people and wounded four more at a Sikh temple in Oak Creek, Wis.

“The only way we kept that story alive was through the Internet,” Kaur said. “Sikh advocates and our allies … posted op-eds, used social media and launched petitions online that finally persuaded President Obama one year later to make a historic policy change to track hate crimes against Sikhs, Hindus and other religious minorities. For a small, marginalized faith community like my own, none of this would have been possible without the solidarity that we all built together online.”

The video highlights how activists have used the Internet to build social movements and promote racial equality and justice after fatal shootings in Ferguson, Mo., and Charleston, S.C.

“The Internet is increasingly critical to our sharing Christ’s message, and empowering people to create a just, loving society,” writes Moss, the Trinity UCC pastor in Chicago, in one scene.

As a humanist coalition partner, Epstein takes issue with the new video’s closing tagline, “First we pray, then we organize,” but he continues to support the campaign’s broader mission.

“When you have a diverse coalition of religious and nonreligious people supporting an issue like this, it highlights how important and crucial it is that we take action,” he said. “Our multifaith neighbors want a better world and are working just as hard for one as we are. The interfaith nature of this project is a great moral lesson for us all.”