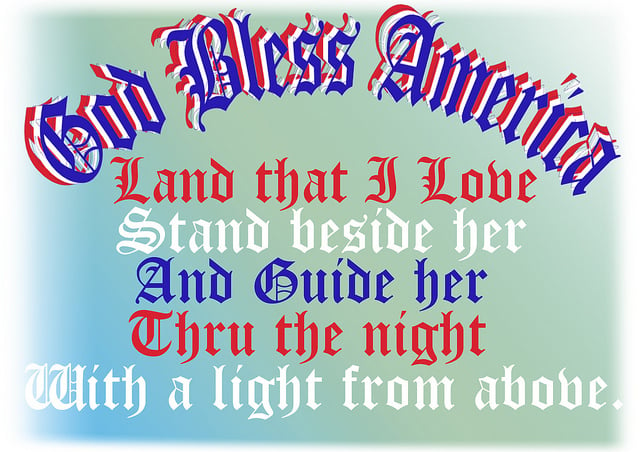 In 1918, while he was serving in the Army in upstate New York, Irving Berlin wrote the song “God Bless America.” It wasn’t until 20 years later in 1938 when Berlin, a Russian Jew, thought the song ought to be revived and used as a peaceful tool against the propaganda being spread by Adolf Hitler in Germany. The song grew in popularity and was adopted for use at public events like parades, baseball games, and political campaigns. The ideology behind the song led to the co-opting of its refrain, written by a Jewish man, by Christian presidents, to the point that now, it’s almost impossible to imagine a president ending an important speech without saying “God bless America.”

Richard Nixon was the first president to use the phrase “God Bless America” in this way, in a speech announcing the resignation of three of his top officials over the Watergate scandal. But the president most associated with the phrase has to be Ronald Reagan, who used it to great effect when he accepted his presidential nomination in 1980 and, despite following in Jimmy Carter’s footsteps in this area, became the president most associated with evangelical Christianity. Since Reagan’s presidency, “God bless America” has become a politically expedient phrase; one a candidate had better practice and adopt if he or she wants people of faith to take them seriously.

Now, some folks on the right are calling for an end to this phrase. Not because it’s been overused and become meaningless, but because of gay marriage. “America is not in a posture for God to bless it,” said Tony Perkins, president of the conservative Family Research Council. “[I]t’s hard for us to ask God to bless America when we have blatantly rejected what God has said a nation should do.” Perkins was speaking on his radio show just two weeks after the Supreme Court ruled that marriage is a constitutional right extended to same-sex couples as well as their opposite-sex counterparts.

Earlier this week, Republican presidential candidate Mike Huckabee told a crowd at the Iowa State Fair that America could not continue to “invoke God’s blessing on this country if we continue the slaughter of unborn children in their mother’s wombs.” He went on to urge the crowd, “let’s end the nightmare and make it so when we ask God to bless us he can look down from heaven and say, ‘I will.’”

This notion that America must be in a certain posture–or hold certain positions–to receive God’s blessing is interesting, and not without Biblical precedent. The Scriptures often speak of people’s hearts being hardened (although, on at least one occasion, it was God Himself who hardened Pharaoh’s heart), and that seems to preclude them from being able to receive God’s blessing.

When God’s blessing is aligned with the objectives of one political party or another, though, it’s a good opportunity to step back and ask whether God’s name is being used for political purposes. The idea of asking what our posture toward God is–both individually and as a nation–can be illuminating, although it’s hard to say in a pluralist society that we have any collective posture toward God at all.

The idea that America has some accountability before God is not new, and was articulated pretty clearly, and controversially, by Jeremiah Wright in 2008. In his now-infamous sermon, he rejected the idea that God would bless America if it kept imprisoning and marginalizing its citizens:

God may have blessed America, or He may have simply let things take their natural course. The only nation that God blesses in Scripture is the nation of Israel, and the new covenant that Jesus ushered in was one that tore down national walls rather than reinforcing them. “God bless America” is a nice idea, and a nice song, but a pretty lousy political ideology.