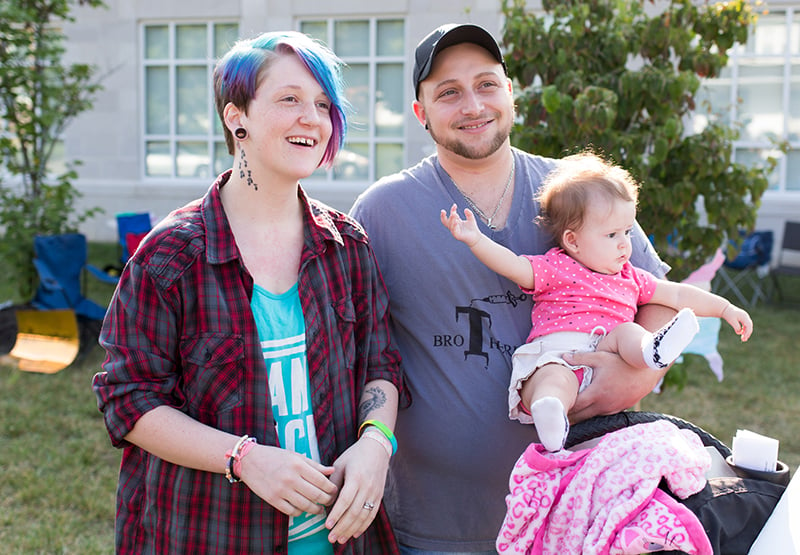 Camryn Colen, right, who is transgender, and his wife Alexis and daughter Lakoda, attended a marriage equality rally held outside the Rowan County Courthouse, on Saturday, Aug. 29, 2015 in Morehead. The rally was to protest the decision by County Clerk Kim Davis to suspend issuing marriage licenses. Alexis who identifies as pan sexual, said Davis’ office provided the license on Feb. 26 without asking to see Camryn’s birth certificate, which still identifies him as female. The couple married that night. “She saw just a straight couple in love, and she should see everybody like that,” Camryn said. “She shouldn’t just see straight couples like that.” Photo by Jonathan Palmer/Special for The (Louisville, Ky.) Courier-Journal, courtesy of USA Today

MOREHEAD, Ky. — A transgender man and his wife stepped forward with paperwork showing that Kentucky Clerk Kim Davis apparently issued them a marriage license in February even though she has blocked forms for same-sex couples over the past two months.

Camryn Colen, who is transgender, and his wife Alexis, who identifies as pan sexual, said Davis’ office provided the license on Feb. 26 without asking to see Camryn’s birth certificate, which still identifies him as female. The couple married that night.

The couple allowed inspection of the license and Camryn’s birth certificate on Saturday (Aug.  29). Their story was first reported by the Daily Independent in Ashland and TheTrail Blazer, the student newspaper at Morehead State University.

The Colen’s said they have wanted to step forward since Davis began refusing licenses for all couples in June, but were concerned about the safety of their 6-month old daughter.

Camryn, 30, and Alexis, 21, said they have been together for two years, and moved to Morehead about a year ago. Camryn said they have tried to remain under the radar, but decided that fighting for equality for their daughter’s sake was more important. Rowan County Clerk Kim Davis, right, argues with David Moore and David Ernold, after they were denied a marriage license at the Rowan County Courthouse in Morehead on September 1, 2015. Photo courtesy of USA Today, via The (Louisville, Ky.) Courier-Journal, photo by Tim Webb

Rowan County (Ky.) Clerk Kim Davis, right, argues with David Moore and David Ernold, after they were denied a marriage license at the Rowan County Courthouse in Morehead, Ky., on Tuesday, Sept. 1, 2015. (Photo: Tim Webb, The (Louisville, Ky.) Courier-Journal)
“Stuff has just escalated and gotten ridiculous, and we decided that we were going to come forward with it,” Alexis said.

They spoke to about 100 demonstrators outside the Rowan County Courthouse in Kentucky during a Saturday rally to support couples who have been turned away. The group waved signs and chanted as cars drove by honking in support.

Randy Smith, an evangelist and ardent supporter of Davis, said couples have tried to create a spectacle, requesting licenses when they know Davis will not issue them.

“They do a good job portraying themselves as a victim and they are not the victim — Kim Davis is,” he said. Smith argued that the couples are “trying to compel our county clerks to violate their deeply sincere belief that gay marriage is sin.”

“Our couples can’t wait. This has been torture,” she said. “This has been very disheartening for them to have to be denigrated and denied for two months.”

Davis has refused licenses for all couples ever since the U.S. Supreme Court ruled in June that marriage is a constitutional right. She argues that signing off on the forms violates her religious liberties and convictions as an Apostolic Christian.

Camryn, an Iraq War veteran, said he decided to transition in 2010. Since stepping forward, the couple said they have received “massive” support from the community.

Alexis Colen said that, in issuing a license for her marriage, Davis was “judging a book by its cover.” She said Davis was in the office at the time and advised a staff member who was doing the paperwork.

Camryn said he was surprised to obtain a license so easily and that “technically, they granted a same-sex couple a marriage license before it was even legal.” He indicated that he wasn’t concerned about the legality of the license now that the Supreme Court has ruled.

“As far as our marriage goes, we feel great,” he said. “But the fact that we are married, and so many of our community members aren’t married, that’s why we are here today.”

Smith said the group has underestimated support for Davis and was trying to counter a rally that drew thousands to the State Capitol last week in support of Davis and two other clerks who have refused licenses.

“It’s not our desire to see anybody in pain or hurt or deprived of anything,” he said. “It’s just our desire that the same respect be given to those of us who have strong moral convictions.”