But what’s an “Apostolic Christian” and why does the group object to same-sex marriage? Let us ‘Splain:

Q: Who are Apostolic Christians?

A: Pentecostalism is a Christian movement that emphasizes a personal experience of God, including the miraculous gifts of the Holy Spirit and speaking in tongues. The movement grew out of the 1906 Azusa Street Revival in California and takes its name from Pentecost, when early Christians first received the gifts of the Holy Spirit, such as the ability to heal and prophesy.

Apostolic Pentecostals then split from the rest of the movement in 1916 over a disagreement about the nature of the Trinity.

The group also believes you must speak in tongues to be saved, a practice known as glossolalia, which involves uttering a foreign language previously unknown to the speaker.

Q: What does the “apostolic” in “Apostolic Pentecostal” mean?

A: All this quibbling about whether the Father, Son and Holy Spirit are three persons or three titles for one person and which ones Christians name-check when they baptize new believers sounds pretty minor, right? But it’s kind of a big deal. The doctrine of the Trinity, Synan said, “goes to the very heart of the Bible and the Christian Gospel — the very idea of the Godhead.”

Q: OK, well, what’s with the long hair and skirts? 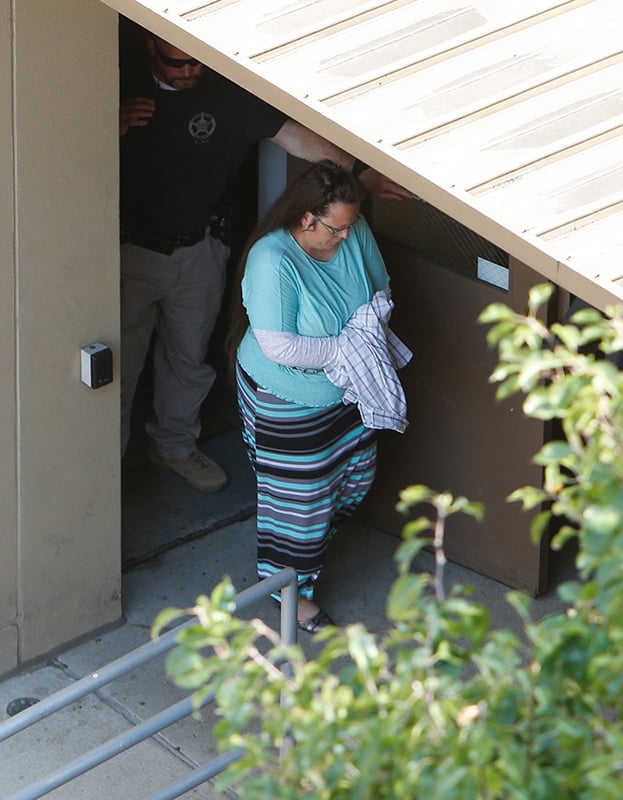 Rowan County, Ky., Clerk Kim Davis leaves the federal courthouse on Sept. 3, 2015, in Ashland, Ky., in handcuffs with a shirt wrapped around her wrists. Photo courtesy of USA Today

READ: Coloring books for grown-ups: Calming — but a spiritual practice?

Q: So what does all this have to do with same-sex marriage and Kim Davis?

A: The general superintendent of the United Pentecostal Church International, the largest and most influential Apostolic Pentecostal denomination, issued a statement earlier this year in response to the Supreme Court decision recognizing same-sex marriages. In his statement, he defines God’s plan for marriage as “the union of one man and one woman who make a lifelong commitment,” and encourages Christians to “defend the freedoms of speech, press, association, and religion.”

In a statement released Sept. 1, Davis affirmed that definition as “a central teaching of Scripture and of Jesus Himself regarding marriage.”