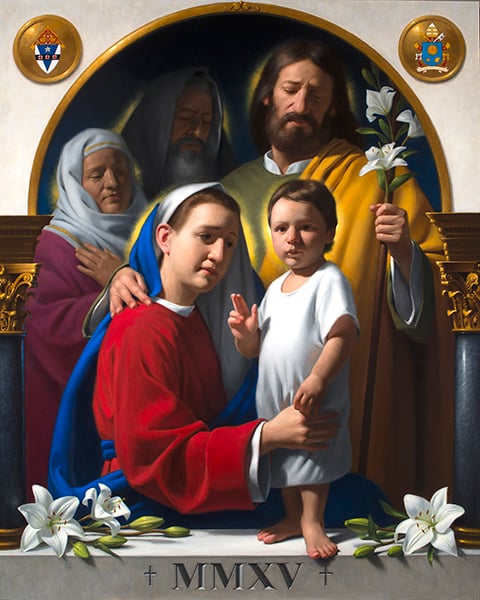 (RNS) “Love is our mission.” So proclaims the promo language for the Catholic World Meeting of Families, which begins Sept. 22 in Philadelphia and will feature the most famous and well-loved Catholic of them all, Pope Francis.

But what’s being shown LGBT Catholics and their supporters in the runup to Philadelphia feels less like love and more like a chill wind.

Over recent weeks, as meeting planners have gone through the frenzy of logistics, security details, and endless other organizing tasks, they have collided with a social change juggernaut that poses a difficult dilemma for the church: the gay rights movement, and a level of support it enjoys in the U.S. that has gone from minuscule to solid majority status seemingly overnight.

This poses a big challenge for meeting organizers who, like the larger church, are promoting what they believe is the one-and-only, God-ordained family structure: one man and one woman, in a complementary union ideally configured for bringing forth and raising children.

Is there a way to square that exclusive stand with the meeting theme of love, and with what science and lived reality have taught us about same-sex relationships and the people who are in them?

Not if the topics and speakers on the schedule for Philadelphia are any indication.

The Catholic gay rights group New Ways Ministry had been vying to convene a workshop during the conference on “Transforming Love: Exploring Gender Identity from Catholic Perspectives.” The workshop appeared to be all set —  until Archbishop Charles Chaput vetoed it.

The only gay-themed address on the schedule is by a gay man and his mother, who, according to program language, will discuss ways in which “Catholic families can respond to a family member’s disclosure that they are same-sex attracted … or gay or lesbian.” The speaker, Ron Belgau, is celibate, modeling what is apparently the only acceptable way to deal with homosexuality in the minds of the conference decision-makers.

If this matter were put to everyday Catholics, gay perspectives on families might get more of a hearing. A new survey by the Pew Research Center finds that U.S. Catholics tend to be more accepting of gay people and nontraditional families than those in charge. While about 90 percent of Catholics said the married mother-and-father model is “ideal,” according to the survey, more than 40 percent said a gay couple raising children is “acceptable and as good as any other arrangement.”

There’s a revealing nuance in the Pew data that bears closer inspection, however. Among the most regular Catholic churchgoers, acceptance of nontraditional families trends lower. Only 34 percent of those who attend Mass weekly call it acceptable for children to be raised by a gay or lesbian couple, in contrast with the 49 percent rate found among Catholics who attend Mass less regularly.

So it seems the closer one goes to the core of the church, the stricter adherence one finds to traditional Catholic teachings about what constitutes a proper family in the eyes of God. And when we follow this train of thought even closer to the core — to the doctrine and the councils of men who preside over the church — we find the tightest adherence to the age-old teaching: one man, one woman, created by God to join together and form families.

But things get intriguing and a little unpredictable when we get to the office and person of the wild-card pope who leads the church today and who is headlining the Philadelphia conference. Although he has done little to change official Catholic teaching on the hot-button issues of the day, Francis has a habit of humanizing those who official doctrine relegates to outcast status. This includes gay people, about whom Francis has famously asked, “Who am I to judge?”

Francis has said something else that at least complicates what the church will do about nontraditional families and the people who form them. We must, Francis says, “consider the person.” That begs conversation-changing follow-up questions, like “Why is someone gay?” and “What does that person go through when he or she is shoehorned into structures that don’t fit?”

It’s as if Francis himself, with his faithfulness to official church doctrine and his compassionate, nonjudgmental way of speaking about the human beings affected by it, embodies the tension of the larger church: the desire to uphold traditional teachings and model Christian love at the same time — two things that do not always go together. Tom Krattenmaker is a writer specializing in religion in public life and communications director at Yale Divinity School. His most recent book is “The Evangelicals You Don’t Know.” Photo courtesy of Tom Krattenmaker

We know how the church is resolving the dilemma for Philadelphia — sorry, non-celibate LGBT people — but the world families meeting is hardly the final decision point. History demonstrates the church’s ability to learn from science and other data sources. The church no longer considers it heretical to acknowledge the Earth is round, as you have probably heard. Today, the Vatican is accepting of the science-based reality of climate change and exhorting the world to address it.

With new light shining on the reality of who gay people are, and why, the future might find a warmer wind blowing around this issue, too.

(Tom Krattenmaker is a writer specializing in religion in public life and communications director at Yale Divinity School. His most recent book is “The Evangelicals You Don’t Know.”)