Pope Francis, center, arrives to celebrate the final Mass of his visit to the U.S. at the Festival of Families on Benjamin Franklin Parkway in Philadelphia on September 27, 2015. Photo courtesy of REUTERS/Tony Gentile *Editors: This photo may only be republished with RNS-POPE-FAREWELL, originally transmitted on Sept. 27, 2015.

PHILADELPHIA (RNS) Pope Francis ended his historic, and taxing, trip to the U.S. on Sunday (Sept. 27) after again renewing his call to American Catholics — and, by extension, the entire church — to move beyond a “narrow” vision of Catholicism that he denounced as “a perversion of faith.”

Speaking to close to a million people jamming the main thoroughfare of the city for the closing Mass, Francis began his homily by citing the Scripture stories in which followers of Moses, and later Jesus, complain that others are prophesying and casting out demons without permission.

“Here is the surprise,” said Francis, speaking from an altar set up in front of the city’s art museum: “Moses and Jesus both rebuke those closest to them for being so narrow! Would that all could be prophets of God’s word!”

“(T)he temptation to be scandalized by the freedom of God, who sends rain on the righteous and the unrighteous alike, bypassing bureaucracy, officialdom and inner circles, threatens the authenticity of faith,” the pope continued. “Hence it must be vigorously rejected.”

“To raise doubts about the working of the Spirit, to give the impression that it cannot take place in those who are not ‘part of our group,’ who are not ‘like us,’ is a dangerous temptation. Not only does it block conversion to the faith; it is a perversion of faith!”

The pontiff’s homily essentially summarized the chief themes of this visit, which began Sept. 19 with a three-day stay in Cuba before moving on to the U.S., with stops in Washington, New York and Philadelphia.

The six days of the U.S. leg were packed with historic speeches to Congress and the United Nations, meetings with President Obama and sex abuse victims, as well as various Masses, parades, photo ops and lectures — the latter mainly to his bishops.

It was to the U.S. hierarchy, which critics say has taken a hostile, culture-war attitude to the public square, that Francis most forcefully delivered his exhortation — to change their ways, to be inclusive and welcoming, understanding and flexible, positive and open to dialogue rather than picking fights.

But the persistent thread of openness —  to change in the church and to people who may think differently or disagree — will also be the theme, and flashpoint, of a pivotal Vatican summit of leading bishops that Francis is set to convene next Sunday (Oct. 4)  to discuss concrete ways to welcome families that may not conform to the ideal of the catechism. 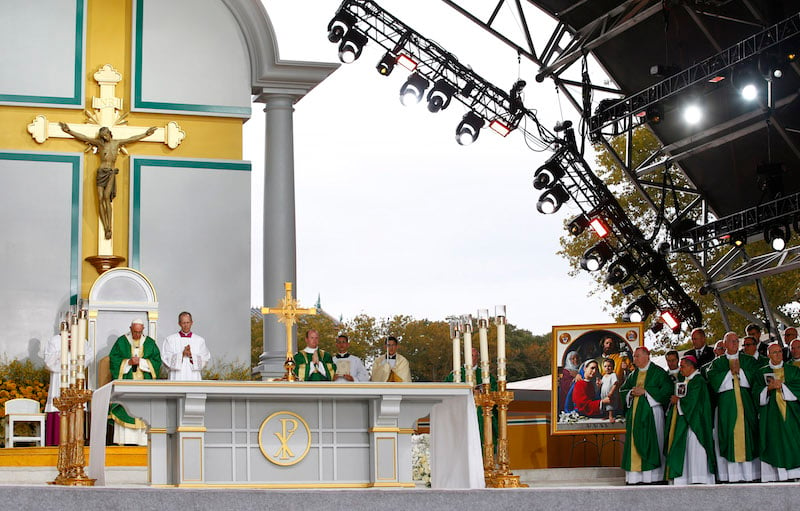 Pope Francis, left, celebrates the final Mass of his visit to the U.S. at the Festival of Families on Benjamin Franklin Parkway in Philadelphia on September 27, 2015. Photo courtesy of REUTERS/Tony Gentile *Editors: This photo may only be republished with RNS-POPE-FAREWELL, originally transmitted on Sept. 27, 2015.

That three-week meeting, called a synod, will bring together nearly 300 cardinals and bishops to discuss whether, and how, the church can tweak its practices or doctrines to be more open to divorced and remarried Catholics, for example, or to gay Catholics.

Francis opened that debate soon after his election in March 2013, and called a synod last October to begin the process of dialogue in the church that he says is needed after decades in which open discussion was discouraged and sometimes harshly censored.

But that dialogue has also unleashed a fierce backlash from conservatives, in the pope’s own Vatican bureaucracy and the right wing of the U.S. hierarchy, which has been the source of some of the sharpest criticisms of Francis and his new approach.

Charges of heresy and dire warnings of schism have set the stage for the synod, which in many respects — despite the massive media coverage of the U.S. visit — will be much more crucial to the success of Francis’ agenda, and the future course of Catholicism.

Yet the U.S. visit, the first to this country by the first Latin American pope in history, was also an important rehearsal of the dynamics Francis is facing.

In almost every talk and at almost every appearance, Francis had a chance to endorse and affirm the hierarchy’s priorities — denouncing same-sex marriage as the great threat to the survival of the church, and the Obama administration as an enemy of religious freedom, or blaming secularism and the weak faith of the flock for the church’s decline.

Instead, he powerfully, yet almost poetically, turned that calculus on its head, telling the bishops to avoid “harsh and divisive language” that may momentarily satisfy the ego. Rather, as he told them, the shepherds should embrace an approach “which attracts men and women through the attractive light and warmth of love.”

The faith is spread by going out to care for the poor and marginalized, those who are lonely and suffering, rather than expounding “complicated doctrines,” he said. All life is sacred, from the womb to the elderly — including the environment — without distinction, Francis said. There are no “non-negotiable” issues that favor some political agendas and stack the deck against others.

Do not fear the world, or fear compromise with one’s foes, but dialogue and work for the common good, he told Congress on Thursday.

“A Christianity which ‘does’ little in practice, while incessantly ‘explaining’ its teachings, is dangerously unbalanced,” he told dozens of churchmen from around the world earlier Sunday. “I would even say that it is stuck in a vicious circle.”

READ: Pope to prisoners: I stand before you a brother

Francis made this trip in part because his predecessor, Pope Emeritus Benedict XVI, had announced in 2012, at the end of the last World Meeting of Families in Milan, that the next triennial meeting would be here in Philadelphia. Then Benedict resigned in February 2013, and Francis was elected.

Many believe Francis, an Argentine, would have preferred to visit the South and West and the burgeoning Latino Catholic population there, but he was locked into this itinerary.

At the end of Sunday’s Mass, a Vatican official announced that Francis, in turn, has chosen the venue for the next World Meeting of Families — Dublin, another city, like Philadelphia, with a venerable Catholic population that has been devastated by revelations of clergy abuse and a near collapse of credibility in the institutional church.

Whether the 78-year-old Francis will be pope then is unknown.

He has said he expects his pontificate to be brief, not more than a few years. He seemed fatigued at certain points during this marathon visit, the longest and in some respects toughest of his papacy, and he was clearly suffering from sciatica that causes sharp pain in his legs.

But he seemed reinvigorated in the last 24 hours, and at the end of Sunday’s Mass he smiled and told the crowd: “I ask you to pray for me. Don’t forget!”

He will need all the prayers, and energy, he can muster for the coming month.