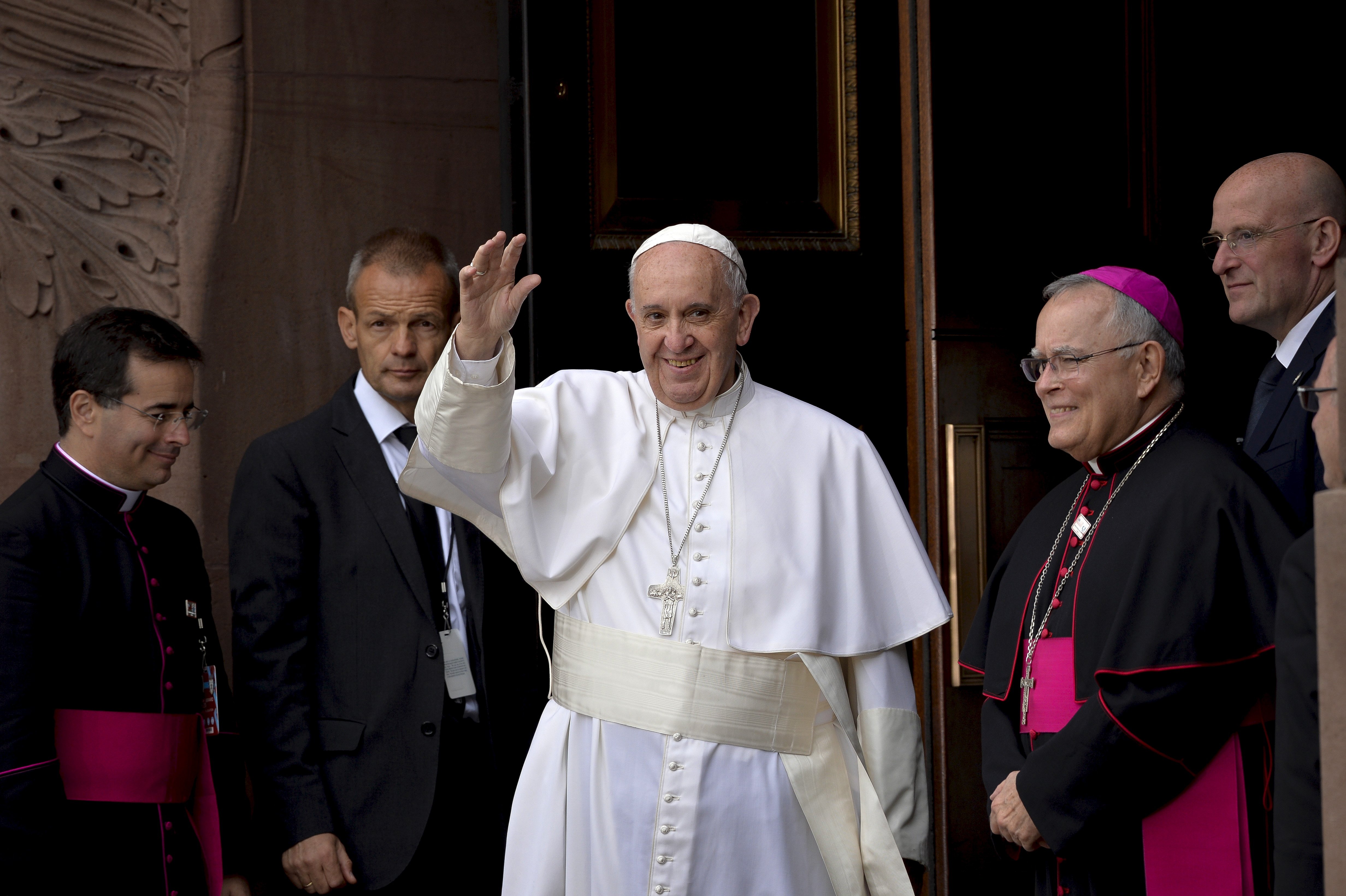 Pope Francis waves to the crowd as he arrives for Mass at the Cathedral Basilica of Saints Peter and Paul in Philadelphia on September 26, 2015. Photo courtesy of REUTERS/Charles Mostoller *Editors: This photo may only be republished with RNS-POPE-BISHOPS, originally transmitted on Sept. 27, 2015.

PHILADELPHIA (RNS) In a powerful rebuke to the culture war mentality that has often marked the public witness of the Catholic hierarchy, Pope Francis told bishops gathered for a major church meeting on families not to blame others for the changes to marriage today, and said a church that constantly explains doctrines without providing real support to families “is dangerously unbalanced.”

“We need to invest our energies not so much in rehearsing the problems of the world around us and the merits of Christianity, but in extending a sincere invitation to young people to be brave and to opt for marriage and the family,” Francis told bishops gathered at a seminary here on Sunday morning (Sept. 27), the final day of the pontiff’s grueling nine-day visit to Cuba and the U.S.

“A Christianity which ‘does’ little in practice, while incessantly ‘explaining’ its teachings, is dangerously unbalanced,” Francis told dozens of churchmen from around the world. “I would even say that it is stuck in a vicious circle.”

At the start of his 30-minute talk, Francis made a brief reference to the legalization of same-sex marriage that the American bishops have made a centerpiece of their public ministry and policy battles, with many of them casting the acceptance of gay relationships as the beginning of an era of exclusion and even persecution for Christians.

Francis, as he has done in his speeches to church leaders throughout this visit, his first to the U.S., refused to take that bait.

Without mentioning gay marriage, he noted that civil marriage and Christian sacramental marriage no longer share a common meaning, as they once did. Yet while recognizing the profound changes taking place, he warned bishops against pointing fingers at their flock or wallowing in nostalgia.

Click on the logo for more Religion News Service coverage of the pope in the U.S.

“Should we blame our young people for having grown up in this kind of society? Should we condemn them for living in this kind of a world?” Francis said. “Should they hear their pastors saying that ‘it was all better back then,’ ‘the world is falling apart and if things go on this way, who knows where we will end up?’ No, I do not think that this is the way.”

He said the church’s shepherds must accompany and help people, and he said they must be converted first to this approach: “For all the obstacles we see before us, gratitude and appreciation should prevail over concerns and complaints.”

“A pastor watches over the dreams, the lives and the growth of his flock. This ‘watchfulness’ is not the result of talking but of shepherding. Only one capable of standing ‘in the midst of’ the flock can be watchful, not someone who is afraid of questions, contact, accompaniment,” Francis said, joking at one point that it “sounds a little bit like an Argentine tango.”

Francis is a native of Argentina and the first Latin American pope in history, and he spoke to the bishops in Spanish, adding occasional observations and asides as he went along.

For example, in talking about the problems of young people not leaving home to marry, Francis looked up from his prepared text, smiled and said:

“In Buenos Aires, many women would tell, ‘Me my son is thirty, thirty-four, and isn’t married. What should I do?’ I tell them, “Don’t iron his shirts anymore!”

In explaining the changes in marriage and family life, Francis compared them to the shift from the local neighborhood shop to the rise of supermarkets.

Today’s mega-store culture thrives on offering a huge selection of every option, “cleverly displayed” and encouraging consumerism in every aspect of life, but without a personal bond of trust or permanence, he said. Everything is devoted to increasing sales, and “the most important thing nowadays seems to be to follow the latest trend or activity,” Francis said.

“Running after the latest fad, accumulating ‘friends’ on one of the social networks, we get caught up in what contemporary society has to offer,” and that leads to “loneliness with fear of commitment in a limitless effort to feel recognized.”

Yet again, the pontiff stressed that the church’s leaders should not blame young people:

“Are today’s young people hopelessly timid, weak, inconsistent? We must not fall into this trap. Many young people, in the context of this culture of discouragement, have yielded to a form of unconscious acquiescence. They are paralyzed when they encounter the beautiful, noble and truly necessary challenges which faith sets before them. Many put off marriage while waiting for ideal conditions, when everything can be perfect. Meanwhile, life goes on, without really being lived to the full.”

While Francis was speaking to bishops from around the world who were attending the World Meeting of Families, a triennial event held in different cities around the globe, his approach stood in especially stark contrast to the public profile of the American bishops in recent years.

Notable among those culture warrior bishops is Philadelphia Archbishop Charles Chaput, who has been Francis’ host for this final leg of the trip. But Chaput is also a bishop closely associated with conservatives in the hierarchy who have voiced reservations or even strong opposition to the pope’s new course for the church.

In brief remarks at the start of his talk, Francis told the prelates that earlier that morning he had met privately with five adults who had been sexually abused as children by priests, teachers or relatives. The meeting had been anticipated but details were kept under wraps. Many victims’ advocates were strongly critical of the meeting, and said the steps Francis has taken to fight abuse and hold bishops accountable are insufficient.

But in his remarks to the bishops, Francis vowed to hold accountable bishops who allow priests to abuse children, and he hailed the “survivors,” as he pointedly called them, as the real heroes of the abuse crisis and “heralds of hope and ministers of mercy.”