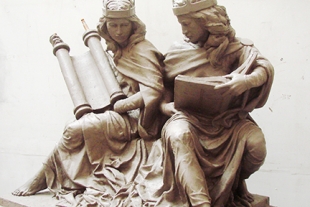 Maquette of “Synagoga and Ecclesia in Our Time” by Joshua Koffman.

On his first trip to the United States, Pope Francis communicated a vision of politics and pluralism that is rapidly becoming the signature social philosophy of his papacy.

In his address to Congress, Francis emphasized the importance of politics as a countervailing force to economic power (just as he had in his encyclical Laudato Si’):

If politics must truly be at the service of the human person, it follows that it cannot be a slave to the economy and finance. Politics is, instead, an expression of our compelling need to live as one, in order to build as one the greatest common good: that of a community which sacrifices particular interests in order to share, in justice and peace, its goods, its interests, its social life. I do not underestimate the difficulty that this involves, but I encourage you in this effort.

Similarly, at the United Nations, he stressed that in a world “marked by our technical ability to overcome distances and frontiers and, apparently, to overcome all natural limits to the exercise of power,” the juridical and political capacity of the U.N. is “an essential response, inasmuch as technological power, in the hands of nationalistic or falsely universalist ideologies, is capable of perpetrating tremendous atrocities.”

Francis’ valorization of politics doubtless derives from his experience living under a repressive military regime in a continent where all too often repressive military regimes have exploited the populace for the benefit of domestic elites and foreign economic interests. It is important to recognize that his concern is not about the relative power of government vis-a-vis the private sector so much as about how humanity makes decisions.

The late economist Albert O. Hirschman differentiated political and economic decision-making in terms of “voice” and “exit.” Politics is all about people using their voices to persuade each other of the right way to proceed together. Economics is all about individuals using resources to abandon — exit — one product or situation and take up another. The conservative desire for privatization and deregulation, for market-based solutions to every problem, expresses the preference for exit over voice.

Francis is emphatically in favor of voice, and not just because, in democratic societies, it ensures that those with the fewest opportunities for exit can influence the choices that are made. It’s also because he believes that, in a world where unfettered economic and technological power makes for social and cultural uniformity, voice equals diversity.

“You should never be ashamed of your traditions,” he told immigrants in his speech at Independence Hall Saturday. “Do not forget the lessons you learned from your elders, which are something you can bring to enrich the life of this American land.”

At Friday’s ecumenical prayer service at Ground Zero in Manhattan, he said, “It is a source of great hope that in this place of sorrow and remembrance I can join with leaders representing the many religious traditions which enrich the life of this great city.” At Independence Hall he shaped praise of religious liberty into an “imperative that the followers of the various religions join their voices in calling for peace, tolerance and respect for the dignity and rights of others.” And he made an unscheduled stop at St. Joseph’s University with his friend and compatriot Rabbi Abraham Skorka to bless a new sculpture showing figures representing synagogue and church communing with each other.

Voice means dialogue, and in Congress Francis described his own desire to engage in dialogue with the working poor, the old, the young, and with the assembled legislators who have turned talking past each other into way of life. Nor did he exempt his  church from this imperative, condemning “inner circles” as a “perversion of faith,” heaping praise and thanks on the nuns his predecessor subjected to ecclesiastical scrutiny and censure, and telling bishops they must “seek out” and “accompany” those whose behavior is unacceptable rather than contenting themselves with “explaining” church teaching.

Francis’ vision has, like all visions, blind spots. He may underestimate the extent to which market forces can enhance diversity. His appreciation of the gifts that different groups bring to the table leaves advocates for women’s full equality in his church cold. And while he is the first pope to publicly acknowledge the malfeasance of bishops in covering up clerical sexual abuse, the poor and the immigrant seem to draw his empathy more easily than the victims of abusive priests.

But his embrace of politics as such represents a real advance in Catholic social teaching. And his appreciation of diversity as a good in itself, inside as well as outside the church, is not something we’re accustomed to hearing from popes. At a time when diversity has become a dirty word in many societies, and when democratic politics frequently seems incapable of meeting the challenges they face, Pope Francis offers compelling advocacy of both. We are all in his debt.