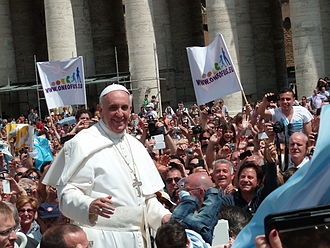 Francis among the people at St. Peter’s Square.

A day after the Vatican fired a monsignor for publicly declaring himself a partnered homosexual, Pope Francis inaugurated the Bishops Synod on the Family with a homily that opened the door to church acceptance of same-sex couples.

You think I’m kidding? Read the homily for yourself. In it you’ll find a celebration of marriage that is all about the human need for a loving, lifelong companion to overcome loneliness, and minimally about procreation and the raising of children.

Adam was lonely in the Garden of Eden, says the pope, and this pained God, who therefore decided to create “a helper fit for him,” as Genesis puts it. “These words,” said Francis, “show that nothing makes man’s heart as happy as another heart like his own, a heart which loves him and takes away his sense of being alone.” As for Jesus’ opposition to divorce: “This shows us that the goal of conjugal life is not simply to live together for life, but to love one another for life!”

That’s a very far cry not only from the Pauline/Augustinian view of marriage as a remedy for sexual desire (“better to marry than to burn“), but also from that of such contemporary religious conservatives as Robert George, who make childrearing the alpha and omega of marriage, and denigrate mere loving adult partnerships.

No doubt, defenders of traditional marriage will claim Francis as one of them by pointing to his statement that “God’s dream for his beloved creation” is “to see it fulfilled in the loving union between a man and a woman.” But not all marital unions are loving, and not all loving unions are between a man and a woman. God may dream of things that, for one reason or another, aren’t the case.

Does this mean we’re going to see same-sex marriages taking place in Catholic churches any time soon? By no means.

But just as Francis supports Communion for the divorced and remarried, so, it would seem, he supports it for same-sex married couples. The culmination of his homiletic message to the synod concerned people who fall and err. “The Church must search out these persons, welcome and accompany them,” he said. “For a Church with closed doors betrays herself and her mission, and, instead of being a bridge, becomes a roadblock.”