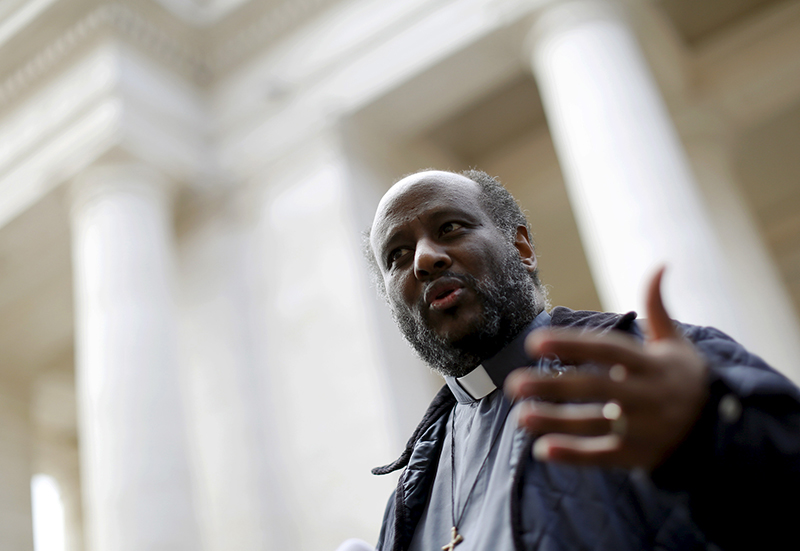 Eritrean priest Mussie Zerai gestures during an interview in front of St. Peter’s Square at the Vatican on Sept. 30, 2015. Zerai, who has helped some of the thousands of African migrants who have risked their lives to cross the Mediterranean Sea, was among the nominees for this year’s Nobel Peace Prize. Photo courtesy of REUTERS/Alessandro Bianchi
*Editors: This photo may only be republished with RNS-ERITREA-PRIEST, originally transmitted on Oct. 13, 2015.

NAIROBI, Kenya (RNS) A surge of migrant deaths in deadly voyages across the Mediterranean Sea has become a modern-day refugee crisis.

But the Rev. Mussie Zerai, a 40-year-old Roman Catholic priest from tiny Eritrea, north of Ethiopia, has moved to help migrants trapped in the North African deserts and rickety wooden boats drifting across the sea.

“It is my duty and moral obligation as a priest to help these people. For me it’s simple: Jesus said we must love one another as we love ourselves,” Zerai said in a telephone interview.

The little-known priest, now based in Rome and Switzerland, was among this year’s nominees for the 2015 Nobel Peace Prize, along with Pope Francis. (The prize, announced Friday, was awarded to the National Dialogue Quartet, which helped build a pluralistic democracy in Tunisia.)

Zerai runs a center that receives calls from distressed migrants who have fled their countries in hopes of finding a better life in Europe. He relays refugees’ GPS coordinates to coast guard and naval authorities so they can launch rescue operations.

Most of the migrants are from Syria, the horn of Africa and sub-Saharan Africa and are fleeing political and social situations in their countries of origin. Eritreans, Ethiopians and Somalis make up most of their numbers. They usually attempt to cross to Italy through Libya, Egypt and Morocco.

“Many of them are fleeing war, religious, political and ethnic persecution. Then, there are dictatorships and poverty which are causing this exodus,” said Zerai.

In North Africa, some of the migrants are captured by traffickers who seek ransoms from their families. Those who cannot pay ransom are sold to those who harvest organs for illegal transplants.

In the Mediterranean, 3,000 migrants on the voyages have died this year so far, according to the International Organization for Migration. Observers say the number of deaths is expected to increase as the cold season approaches.

Zerai, who was born in Asmara, the Eritrean capital, says he found himself a refugee at the age of 17. From his experience as a migrant in Italy, Zerai started getting involved in campaigns for the human rights of refugees. His work strengthened when he was studying philosophy at the Pontifical Urban University from 2000-2003.

In 2003, he gave his mobile phone number to migrants after helping an Italian journalist interview refugees in prison in Libya, during the reign of the late dictator Moammar Gadhafi. From then on, migrants began spreading the word to call Zerai’s number for help.

Through Agenzia Habeshia, the charitable trust he set up in 2006 to campaign for refugee rights in North Africa and to help others in Italy get asylum,  Zerai has saved thousands of migrants.

When he receives the calls, the priest finds the GPS coordinates of the caller’s phone and then shares the location with the Italian and Maltese coast guard in the Mediterranean. Through his hotline, many have been saved.

In 2010, he was ordained a Catholic priest after studying theology for five years and then social morality at the Pontifical Urban University in Rome.

Yet, Zerai is concerned that the world’s response to the crisis has been inadequate and most times coming too late. He recalls the time in 2011 when he received an SOS from a boat with 72 migrants that had drifted out to sea. The people were without food, medicines or water.

“It took 15 days for rescue to arrive. By this time about 90 percent of the migrants had died,” said Zerai, calling it one of the lowest moments in his life. “I am still pursuing justice for these migrants, because I think it is NATO’s role to protect the migrants.”

He also is pushing for a “humanitarian corridor,” safe routes of passage for migrants so they can get visas in European countries.

For him, African governments must make greater efforts to protect their children and grant more rights and freedoms.

“I think the migration will only end when there is more justice, less corruption and abuse of power that oppresses the masses for the benefit of few in power or the rich who buy the power,” he says.

Zerai said he was happy to have been nominated for the peace prize. “It is great reward for my service to refugees. Above all, it is a recognition of the seriousness of the situation of the refugees coming from sub-Saharan Africa,” he said.